Most people depend on their eyesight so much, life without it can't be imagined. Indeed for most of human history, those who lost their vision were dependent on others. Today, modern technology allows the blind to live independently, and many surprise the rest of us with how well they can adapt and live surprisingly normal lives. This includes using computers and going about Second Life. A few years ago, the Newser interviewed DJ Keao, whom in real life was completely blind but still able to get about the virtual world. As surprising as her situation sounds, it is not unique.

Longtime readers may be familiar with Mermaid Celene (CeleneHighwater Resident), whom was with the Newser team a few years ago. Among the things she wrote about was the Radegast third-party viewer which turned out to be an invaluable tool for the visually impaired. Since then, she has founded a group for them in the virtual world, the Blind Users Support Group.

Welcome to Blind Users Support. This group is for sighted and blind SL users alike who want to work on in world accessibility projects. This group also provides technical support to those using the Radegast viewer or other low vision or blind friendly viewers.

Recently, I met up with her and interviewed Mermaid. Our interview started off on an amusing note as she arrived at the Newser with a fishing pole in her hand, though quickly removed it, musing, "I just took off my fishing pole. I have been told it is a hazard when not in use. I am sure I have hooked at least one person with it."

Asking about how she first found out about Second Life, Mermaid answered, "I have always been a creative person and I always had a desire to play games that involved life simulation, town building, management, things of that nature. The problem is that none of that is accessible. So one evening I had just discovered another inaccessible game and started to cry. My real-life husband asked if he could check in to something and he came in-world. He found his way to Virtual Ability and he was informed that there was a new text-based viewer called Radegast. I tried it and studied it for two years before starting to train others.

"Back then there was no user guide, so it was purely trial and error. Virtual Ability was instrumental and getting me on my feet in Second Life. I wanted to help other blind users discover SL because it is so different than anything else available to us. And it is so much more accessible than people think. With a little time and effort it is doable."

I then asked when the group came about. "It is about a year old," she answered, "Virtual Ability suggested that we start a group for blind users and it grew in to a group not just for them, but for people who wanted to work on in-world accessibility projects. I have been shocked by the outpouring of support from the Second Life business community. We have over a hundred members and growing." There was no group for blind users beforehand, "We were all just in Virtual Ability. Now we are a secondary group to them. But Virtual Ability is still home, for those of us who have disabilities anyway." 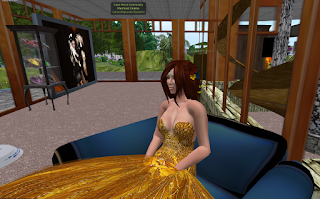 She spoke more about her supporters, "Seeing the support of stores like Allura has been incredible. Kenzie is fantastic and has been so supportive of our cause. We think a lot of her. Others too have been great. We have several clubs who are members as well. ... Foxy's, Always Amazing, Fishermen's Warf Beach Club ... There is no way I am going to be able to get all of these." She would later mention three others, Codfathers, the I Love 80s Club, The Maldives, and one with a store, "Simply Shelby is another great one that has a very accessible store for the blind user."

"A number of residents would be surprised to encounter blind residents," I reminded Mermaid, "What do the various members of the group do here in Second Life?" She told me, "People are surprised. They are also very friendly and do their best to accomidate us for the most part. Different users do different things. One owns his own sim and I believe he runs his own club. Others DJ, role play and shop. ... They are very active in various communities in-world. I don't see some of them often any more. They have left the nest. (laughter)

As Radegast was a few years old, I asked her if there was another viewer in development that would be as helpful or moreso to blind users. Mermaid answered, "Yes. It is being developed by Cinder Roxley. I would interview her about it for further info, honestly. I don't know a whole lot. She is doing a great job and she is developing it alone so it is difficult. She is maintaining Radegast while she works on it. So we are always looking for C++ programmers willing to donate their time to helping her. Radegast is our only avenue for using Second Life. So if it were not here and updated we would be shut out of SL."

Mermaid had messaged the Virtual Ability and Blind Users Support group chats about anyone else whom I might want to talk to, and told me, "Gentle just suggested that you might want to talk to Nilesh. He is a brand-new user who is exploring Second Life for the first time this week. He might have a unique perspective. ... He is a quick study. They learn so much faster than I did. It took me a year to learn to do some of the things he is doing. Of course, we were learning as we went. It was one of those things where you just had to experiment to see what did what." 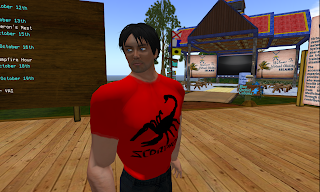 Meeting up with him took a little effort, and the two of us were soon on the Virtual Ability sim with NileshMistry Resident. He had been on Second Life for only a few days. There were some introductions, then I asked him how was Second Life going for him. "Not bad," Nilesh answered, "I am enjoying it. Second Life has a lot to offer. A bit of a learning curve as a blind screen reader user, things work very differently. But I'm getting my head around things." And what were some of the more challenging things? "Mainly just trying to not go around looking awkward (laughter), so things like knowing where to face, the socially excepted distance you should keep between people, not walking into things or tripping over people, things like that." Mermaid commented musingly "still stumbles over people even after eight years (and) has impaled at least one with my fishing rod. He is wanting to learn to fish so I am thinking I won't be the only one!" That got Nilesh chuckling.

The newcomer went on, "Walking into a new place is difficult obviously its hard to no how far or close you are from people, or if you have your back to them." Mermaid stated, "You won't run in to anyone in SL unless you teleport in on top of someone or sit on them." "Over all though, its great, been getting involved with a lot of events, and finding new places."

I brought up to them that neither had profile pictures. Mermaid responded, "You can put pictures in place but I honestly haven't experimented with it. When you are blind sometimes that slips your mind. Or at least it does for me. Haha." Mermaid tried to get hers in place, but it didn't work and decided to get a friend in real life to take care of it later. Nilesh's luck was not better, "I'll either try again later, or get a friend to do it."

It was about this time we had to go our separate ways. Niles would say about the virtual world, "In general though, Second Life is great and a lot more than I thought is accessible to blind people, and it looks like its just going to be getting better. The client we use is brilliant, Radegast." Mermaid would say, "It is pretty amazing how far we've come in a year. Thank you guys for doing a story on us. Hopefully it promotes us further. The group is open to anyone who is interested in in-world accessibility."