Looking Back at ComCat Fenstalker 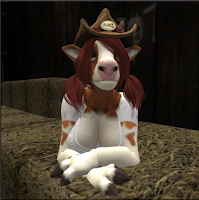 Yours truly knew her as an occasional visitor to the Happy Vixen and Club Cutlass, and some other Sunweaver events. Standing out in a bovine avatar when most everyone else was a fox, bunny, wolf, normal human, etc, she was certainly a unique personality around. It was unwelcome, sad news when word began getting around on the evening of Friday May 15. Her real-life age was 70, something not revealed to most until after her passing.

"Came as a shock," Dusk Griswold told me, saying she and Violet Solano, "were both good friends with CC. We were almost a team. I think I first met her at Amaranth. Amaranth was her home club, but I'd invite her to Happy Viven or Cutlass if nothing was happening there. One of those people who stand out. And very creative when it came to themes. We'd always look forward to how she'd dress for themes. Might show up at 'Come as your are' as an av of a U and and R, and an R, too.

"Always had a dance chim, I'd always wait for her to show up at the club before dancing, and she'd invite me and usually several others to the chim, so we'd all dance together. Her and Vi and I were kind of an unofficial team.

"One thing I know her player liked to do was give phone scammers a hard time. Her thinking was, the longer they were on the phone, the fewer people they could scam. So she'd waste as much of their time as possible.

"She was also good at modding, I learned some of my modding skills from her. Remember my Gazelle from 'Zootopia' av? That would not have come about without her help.

"Also, could always count on CC to attend RFL events. She was very popular, a lot of people will really miss her. ... overall, we have lost one of the nicest, most creative and funny furs I have ever known. We don't know what happened, and Vi does not plan to find out. ... It has really hit the Amaranth family hard.

Violet would tell me they met, "at a club in a now long gone vintage Los Angeles sim. I used to go to listen to swing music. (I) met her there, brought her back to Amaranth, and she was just part of the family in very short order. There was no place where she didn't get along."

As a member of the Relay's Meli's Maniacs team, she did much to keep spirits up, "and sadly there's no possible way to tell all her friends of her passing. And that's the saddest part of it. To a lot of people, she is just going to be one of the vanished."

She would go on to say she had fond memories of her, "running battles on the sim surface between her and her power shout and me with my dubstep. Or with tanks, guns, or getting a few of us in jex avatars and big game outfits going on the great jexpidition on the old Grendal's jungle sims. CC was  a silly old graymuzzle who only wanted people around her to have fun and be happy."

"As one of our other club staff, Kulara Darkstone,  posted in Facebook : "

In loving memory of ComCat Fenstalker aka CC. Our beloved bovine avatar friend. CC was a great friend to everyone. She was Funny, Smart, Clever, Kind, Generous and loved a good PUN and loved silly gadgets in Second Life. All she wanted was a "stable" home, and she was "udderly" bodacious

Sadly, the story of a resident whom just wanted to make others happy, has come to it's close. What are left are the screenshots, tales, and memories.