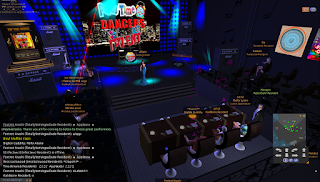 On Sunday May 3, I got to see something I hadn't seen for a while in Second Life. I dropped in on a talent show. PastorDanT Resident told me about it, and invited me over to check it out.

The SURL took me to "Party Time Dancers," high above the Deep Woods sim. To my surprise, when the lag started to clear I found I was on stage. I promptly stepped down. Just in front of the stage were four seats with red unlit "X"s in front of them. Three of them were occupied by a man and two women: Bigtex Cuddihy, KaliiNoire, and Pastor Lynne (Lynne Applewhyte). I went ahead and got into the seating area. PastorDanT soon appeared on stage, and in voice welcomed everyone to the show. 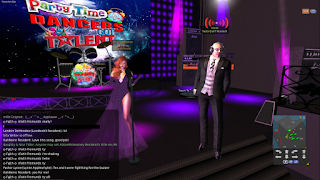 One at a time, five women appeared on stage to sing a song: Aliana Rallier, Fawn (FawnSilver), Selena Alexandre, Mrs. TommyC (NancyleeWillis), and Faith Fromund. Some had some technical difficulties with the sound, and I had to reboot the stream with most of them. But all five got cheers from the audience. Alina, Fawn, and Selena all got overal approval from the judges. With Mrs. TommyC, not so much, Bigtex saying, "I think your voice is great, but the song was not a good match. No for me, sorry." Faith got quite a number of cheers from the audience. Then someone from the judges rang the "golden buzzer." Tex and I were fighhting for the buzzer," Pastor Lynne would say. The contesents would all get applause from the audience, though one expressed disapointment of her favorite singer not making it to the next event.

After most everyone else had cleared out, I had a few words with PastorDanT, to which he responded to my questions in voice. When asked where did he get the idea for the talent show, he answered that it was from "Out of boredom," and with all the things happening in real life lately. He had been spending time in his "mancave, a house outside of my house. Anyway, I did this because this would be a good pressure relief" for the public, and fun and exciting.

When he announced the tryouts for his talent show, twelve people answered. "Six bailed," he told me, two thinking they were "too good" for the competition. Pastor Dan would say the show was inspired in part by "America's Got Talent," adding, "I'm a live singer in Second Life as well, I love to perform." He felt the show was "a nice tension breaker, seems to be working." He was getting no money from this, "This is just for fun. ... this hectic world we're living in. Everyone had fun." 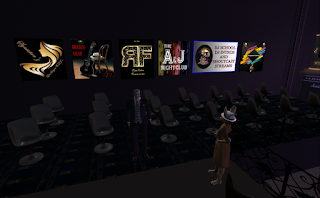 As for how much time it took to organize everything, Pastor Dan felt compared to everything else that was the easy part. Someone he knew made the stage and got it to do everything he wanted from the special effects to the curtain, "In return, we sponsor her on the wall. Anyone else who sponsored also got their picture on the wall."

The winner of the competition would be determined by a process of elimination, with the judges voting after each performance. Lighting an "X" up was a strike against the person, "one person get two Xs, she won't be back next week." The winner at the end would be getting a trophy. While there was no cash prize, "they get the recognition, get a chance to sing at one of the places for money."

Of the six women, three "have never done a live event, so that's good. Usually they DJ, so they don't use their singing voice. I think they were pretty good. One got the golden buzzer." He commented she was surprised when it went off, "she didn't know what it was." With this event, there were five with one going out, and four staying to next time.

Pastor Dan told me the next event would be held at the same place, but "we're going to try to go to different venues. meet more people." He told me over time, he'd been with a lot of venues in Second Life, clubs and lounges and places selling musical instruments, "I've been to a lot, too many. I've heard from some back, a few nasty, oh well, that's SL. Working on getting out more." 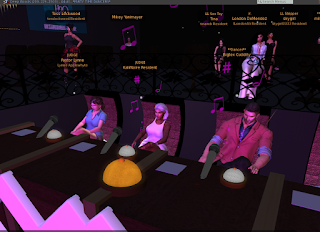 He had wanted four judges for the event, but only three were able to make it today. Still, he felt they were "a great group of judges." Each runs a venue inworld. Bigtex Cuddihy ran "Party Time Dancers" where the event took place. KaliiNoire, Pastor Dan told me she ran "one of the biggest restaraunts with a club inside." Pastor Lynn was a pastor here in Second Life.

Of the next round of the competition, "Probably on Friday the 8th, 3PM SL time." It would still be in Party Time Dancers, "Later events at the Elixr, hopefully."

And yes, Pastor Dan is a pastor in Second Life, doing church services on Sunday at Noon SL time, with live broadcasts on Zoom, "people can join in. ... Other than that, I chase my chickens and feed the rabbits."