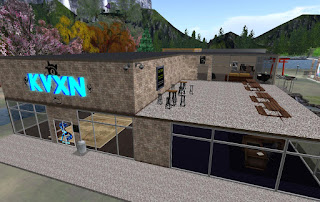 Among the people at KVXN radio is DJ Fritter, whom in Second Life goes by Applebloom (JeanetteDJennet Resident), and also goes by Hakura the Pup. I recently had a chance to interview her. We met at the KVXN building in Purfection Estates. She was in a light brown anthro canine avatar, in jeans and a white shirt with a cowboy hat. After sitting down at a table, and her adjusting herself so she didn't look like she was "cut in twine by the table," we started.

I asked her how she first found out about Second Life. She scratched her head, "Oh geez, that was along time ago. My SO Thistleblossom, who is deceased in real-life, was on here first and I was looking over his shoulder one day and watching him and he asked me if I would like to make a character and join him. So I did and I've been here ever since. That was like back in, oh God, early 2011." 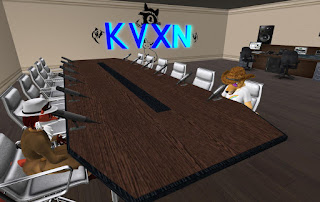 Of where her names come from, she responded, "Hakura The Pup is my real-life fursona name and what I go by on KVXN. But Applebloom is because of my love for My Little Pony. I'm also a hardcore Brony and because of THAT name over one our KVXN Vixen Radio on Discord, Nydia started calling me 'Fritter' because of the Apple part, so on our server I'm known as DJ Fritter. Ya know, Apple 'Fritter'? *shrugs* She has a weird since of humor, that one. but I still love'er." She chuckled. Asking about her account name having to do with FurryMuck, she went, "OH GAWDS! FurryMuck .... I haven't heard that name in ages. Actually no, t came from another Mu** which was called 'Altered Realities.' I'm not even sure if it's still around. I was what was known as a wizz there." 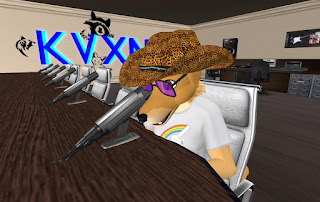 And how did her first days go? She explained, "I had a lot of fun running around with Thistle going from place to place. There was this one dance club that we would both frequent a lot to go dancing. He was a donkey and I was a pony at the time and he was also a brony. We even made our own club called 'Hoof Beatz' but it was short lived. That's actually where I first got my start as a Second Life DJ."

I went ahead and asked Applebloom what experience she had with music before coming to Second Life. She answered, "Well, actually I was back in the 80's a real-life DJ at a Country & Western Danceclub in San Francisco, California that was for mostly GLBT called 'The Rawhide 2.' Not sure if you can actually put that name in here, but that's where I originally got my start DJing in real-life. There I was a DJ because I used CDs and LPs. But on KVXN, I'm what we call a broadcaster. There's a little difference. I don't 'jockey' discs, I broadcast mp3 files with the radio broadcasting program I use." 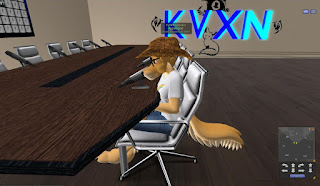 And what did she do after her first club closed? "Honed my chosen craft *ear waggles*. I started DJing on SL full time at several venues that don't exist any longer. Funny how quickly some clubs come and go so quickly. One was a Country and Western venue which I was used to because of my prior real-life experience. So I knew my Country and Western music. After that was a place called 'Dragons and Rose's which let me go back to my roots with music I grew up listening to back in Fort Worth, Texas where I grew up called KFJZ 1270 AM. They played alot of pop and classic rock, which I play now for my show on KVXN. Back then, FM was just starting to happen. Am I dating myself by admitting that? *rubs the back of her head with a paw*"

And what brought her to KVXN? She answered, "I remember when KVXN was still just a Second Life station and I DJ'ed at The Happy Vixen which is where KVXN has it's origins. It was started by someone named Nydia (Tungsten), yes the same one who gave me my 'Fritter' moniker on Discord. Anyway, I DJ'ed there for awhile, kinda with KVXN as a SL station. And then I became part of something called 'The Dragon and Raccoon Epic Fail Show' if you recall that, and had a lot of fun with them. So when JB no longer could do the days he once did I sorta stepped in for a short time and thus started "The Dragon and Pony Show" which lasted only a short time because of real-life issues, but I stayed on at Club EFS which stood for Epic Fail Show, of course. During my time there JB really liked what he heard with my show that I would do there, so when KVXN became a REAL internet station, he asked me if I would like to have my own spot there, so here I am." 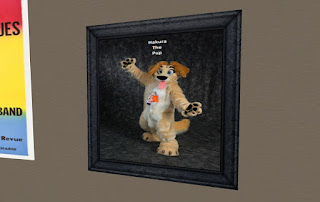 I asked about her show "The Doghouse," and asked if it was from her persona name "Hakura The Pup?" She answered the show was for "Two hours, actually, Monday and Friday 4pm to 6pm Eastern Time (1 to 3PM SL time. Gratuitous plug *toothy grin*. But yeah, my show is called 'The Doghouse' and it does indeed come from my real-life Fursona, Hakura." And what were the show's most interesting moments? Her response was, "*phews* Oh boy, uhm, I suppose when the staff starts heckling me on Discord on our server page. Nothing much has happened as of yet because 'The Doghouse' is still trying to find it's footing, as it were. Footing? Pawing? *chuckles* I am in the VARY early stages of getting some things lined up, but I'm not at liberty to say what that is just yet. Folks will just hafta tune in to find out when it occurs, IF I can get it lined up and OK'd."

So what does Applebloom do in Second Life when not playing music? "Hang out with my close friends like Snowy, Nikkita and a few others," she answered, "But my second passion  on SL is drag racing, which not to toot my own horn, am quite good at. I've got enough trophies to fill this entire studio. I've been doing that for a number of years. I even have a '69 Pro Mod Mustang that is sponsored by KVXN Vixen Radio as well as a split window '66 Corvette done up in a sharp My Little Pony motif that I call 'The Friendship Vette' because like the show's title says, 'Friendship is Magic.'" But how she does race has changed as time has gone by, "Not so much oval racing anymore, which I did with a group called 'Rubbin' is Racin'." I just drag race now. Not really a lot of oval racing left on SL. There's a LOT of drag strips, though." She does say it's not a proverbial "drag," "*chuckles* Not really, but the only trouble I have is I find it really hard to run fast wearing high heel shoes. *grin* Get it? DRAG racing??!?"

After some more chuckles, I asked about her future plans. Her answer was, "I plan on staying here with KVXN. I really like the people/furs here and I know with time and a little tweakling 'The Doghouse' can become a good and hopefully popular show for the station. I have alot of fun doing it and it's the music I grew up listening to." 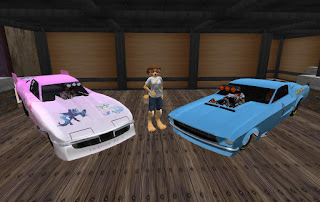 When asked if she had any anything else to add, "Yeah, yes there is. *earperks* STEPH, Heidi and anyone else at Palm Beach Dragway who might read this, I'm gunnin' fer ya'. I'm gunna win that monthly trophy one of these days. FEAR THE PAWS!!! *giggles*"

Afterwards, Applebloom would show me a picture on the wall of her in her fursuit of Hakura the Pup in real life. She would also show me her two racecars.

For more on DJ Fritter/Applebloom, tune in KVXN Radio on Monday and Friday from 1 to 3PM SL time.