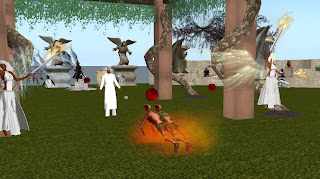 One of my friends in Second Life recently told me about a “Biblical production” performed onstage, “dance, music, narration ... special effects ... exceptional production.” I had never known this particular friend to express any religious feelings, so my interest was raised, and hopped over. The notecard of the event read, “Unity Production Presents ‘ The Creation Story, ‘ A full length Broadway style performance based on the story of God, as Creator, from the angels perspective.”

The sim was crowded when I got there, so it took a while for the stage, and the actors, to rez. The actors portrayed God and the Devil, Adam and Eve, and various angels. The show was all in dance and gestures, with no words. Once it was over and the audience gave their applause, they changed to their normal looks and chatted with anyone who wanted to talk. Some just had a little fun with gestures, such as **Under the mighty hand of God!!** which squished an avatar flat on the ground.

My friend introduced me to Pet Karu, whom was the head of Unity Productions. Asking Pet where they got the idea for the play, she told me she and her friends were part of a “meditation group,” but it was different than most as listening to music and certain styles of dance were considered one of the ways people could meditate. One day when they were listening to songs, someone brought up theater and they talked about going out to see performances on stage, “lets see how this song looks.”

Eventually, they got the idea to do a play in Second Life, a Christian one. When they called for actors, some soon left, but others stayed. The point was they wanted to get the Christian message, “not just from the pulpit, not just from church, but in a new light.” Many of their items had been donated, from the props on the stage to the pillows in the stands. Pet considered the donations, “an example of God’s grace online” and a reason to keep going.”

Pet mentioned others in Unity, such as Liliana Dinzeo, Sixgin Ayres, and Levi Soulstar, who helped make the group what it is, “It’s been fun.” Of Jewel Lordhunter, “Jewel is new to Second Life, but she felt God’s planing.” Liliana was also somewhat new when she first came across Unity.

Unity was officially formed in July 2010, with the group members getting together around May. Pet stated Unity was also “becoming a real-life entity.” They had already registered the name, with plans to build a company outside virtual reality, looking for actors, “We want to be able to offer a forum ... people who have written books, help them to get published. ... We will be going cross-country ... to encourage, to uplift, to remind of God’s love.” Pet wanted to lift the spirits of, “the downtrodden, the confused, the cancer survivors ...”

“For us, real life and Second Life blend,” Pet told, adding they wanted to appear friendly and approachable to others, “not like the church people they ran away from.” She brought up that Metaverse TV had sent someone to their show earlier, and was happy to have the attention of the press.

Even though the play was on computer screens, Pet reminded the effort put in was hard work, “no one person can do this. It takes the labor of all that you see to bring this together.” They had a few problems in the past, such as having to change roles due to unexpected events. The group had sponsors, as well as a gift ship below the stage for additional funds. The cash is not just for expenses. Unity raises money for charity to the Heifer International group (www.heifer.org). The group feeds the hungry, but in a different manner than many aid groups. Instead of simply giving people food, what they give is livestock, crops, and tools, so they can raise their own food, “better to teach a man to fish than give him one.”

After Unity is finished with “The Creation Story,” Pet explained that they would be doing “Jesus Christ Superstar,” but not how the audience might expect as it would be done, “with a Unity Productions twist.” It will play in spring 2011. They were also planning to do performances in additional venues. They were also invited to perform at one stage, a monthly event with small shows, “It’s amazing what God is doing.”

Pet mentioned the “argue ball,” a ball of emotes people with disagreements sit on and have the option of various gestures such as poke and shove. The purpose of it was to make fighting look silly. 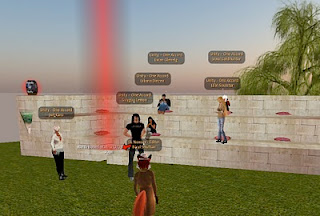 Pet introduced other members of Unity. Ewan Glenelg had once been a pastor of a church in Second Life. He saw the Unity group as a way to both express his faith and use his theatrical background, “It’s been a blessing to help.” He and his wife also run North Bound Marina and Sugar Shore Ballroom.

Guyguy Lemon is also a pastor, “for me it is doing the Lord’s work to bring many to Jesus Christ. (the show) is a vehicle to help people to accept the Lord.” He considered the message of Unity stripped of the dogma and other things that smell like the church audience members try to avoid, “Instead, we’re only after God’s love. No comments about color of skin. What matters is your heart.”

Jewel Lordhunter, “It’s been a blessing living in Second Life. I feel tremendously blessed. People here are very close to me. I’m sincerely blessed to have found a new family. If not for God, I wouldn’t be here. These people are my love and support. We’re available not just to do the show, but to anyone who needs someone to talk to, we’re here for prayer, advice, whatever they like - except free Lindens (chuckle). Second Life has been given to us, not just this virtual world, but a real Second Life. ... Life with the King, we are His family. And for that, we’re spoiled. (grin)”

Pet also mentioned others not present during the discussion, such as Sixgin Ayres, who played Adam, who runs Church of the Living God in Second Life. There were also Lukes LionHeart, Shan Charisma, Miles303 Parkin, and Lycan444 Denfu.

“The Creation Story” performs over North Bound Marina every weekend this January, Fridays at 6 PM, Saturdays at 2 PM, and Sundays at 4 PM. The location is at North Bound Marina at ( 22, 37, 1142). They also have a website at www.unity-productions.org. They are currently raising funds for Heifer International.

"The goal of UP is to portray that Christians are not the intolerant fuddy-duddies or bigots that has been portrayed globally for centuries. We aspire to share the love of God with all who will listen; using various mediums - the arts. traditional bible study, inter-faith discussions. Anyone can open a church, but UP provides us the latitude of presenting our Creator in a fashion that is comfortable and removes the ho-hum from a starched sermon. We try not to pound the Bible into your head, but instead to drive hard the point of the unfailing vastness of God's love to mankind."