Xymbers Slade is a resident with an interesting past and present. He was with the Second Life Mentor Volunteer group, until Linden Lab shut them down in November 2009. Another thing he did then, and still does today, is fortune telling. 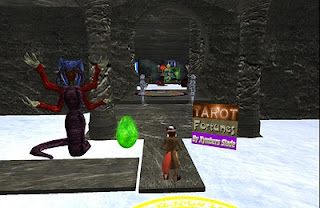 Xymbers “office,” accessible from his dragon’s lair on Sunweaver Air, has a feeling of Medieval and the arcane about it, with the dragons, pentagrams and other mystical symbols, and more. He describes his business as “off and on,” getting a few clients a week.

He offered me a reading, inviting me to his place, “Have a seat... I'll go right into shuffling and we'll see what comes up here... one sec... “

After a few minutes of waiting, “I don't like the locations of some of these cards, they are not painting a pretty picture for 2011. A lot of this seems to want to focus on your own work and your own paper, too. I want to say some of these cards are more general, but a lot of them seem to be painting you with a pretty big target.”

“Six things stand out here. The first is that I got an upside down 4 of Cups (Apathy) as the ‘ best outcome.’ This is basically saying no one is paying attention to what is printed, or no one cares enough to take action if something ‘bad’ is brought up. Very tempted to say if Linden Labs wanted to pull something shady, this'd be the time to do it, and they'd get away with it.”

“The second thing that stands out here seems to be you. I drew you in three separate locations (yourself as the upside down King of Wands as ‘ next influence,’ you as the Emperor in the Past, coming off of a ‘ spilled milk loss ‘ and you as an upside down King of Swords ... someone up in arms here about something but completely lacking the resources to affect the situation). Have you recently come off of a time where you had to issue a retraction or a series of corrections that left your credibility stained? That 5 of Cups in the Past next to you would suggest so... a black eye that affected harder than it was supposed to.” To this I answered no, “All right, then I don't know what that ‘ crying over spilled milk moment ‘ would have been. Fortunately it's in the past and it hit you when you were strongest anyway, so it's a minor blip at this point.” 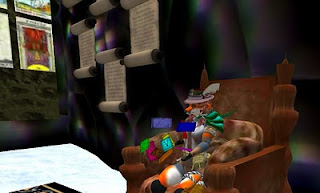 “The third thing that stands out here is that it looks like people's resources and dreams are far fewer in availability --- overall situation card is an upside down 7 of Cups (big dreams staying dreams) and we have an upside down Ace of Pentacles as the Emotions card (no profit in emotions/effort, or a lack of needed emotional resources to see projects through). Combined with that apathy card as the best outcome, this is looking ugly.”

“The fourth thing that stands out is that we have two rivals trying to discredit each other. There will be no peace, and if God put the peace branch out, they'd both set fire to it before turning back on each other. That could be a big problem. It will be something you need to stay out of, else they'll turn their viciousness on you. My guess is a possible story that hits about people being jerks to each other. This is Hatfield/McCoy fight levels here. Effort put trying to make things right or bring it to the attention of people is just going to turn a spotlight on you.”

“The fifth thing to stand out is just another ‘ lack of resources ‘ situation. Though this one seems to be pointed at you specifically. It's saying ‘ Ok, there's a lack of potential here. It's all said and done. No one cares anymore.’ And I think revelations are going to be had that put you on a horse off of SL in time. The center three cards on the right there --- 8 of Cups upside down showing lack of potential (combined with the big dreams staying dreams and lack of emotional resources to make things done right from earlier) Then the Moon showing secrets revealed... And then you as a very weak Knight of Cups... you go out on a good note, but off to where is the question. It all stretches back to that apathy. Less and less people are caring about SL in some form or another. It's an underlying current. After 6-7 years, even new twists on old novelties grow old and faded. So I would not be surprised if the paper or even SL ended by the end of the year. These cards want to suggest that if there's any time for it to collapse under its own weight or (given the presence of the Moon), more likely they'll shoot themselves in the foot and wind up having the bullet ricochet and hit them in between the eyes.”

“The final thing that stands out here is the final three cards. I have no idea what context these are for. Upside down Ace of Wands, suggesting growth but in the wrong direction... and right next to that is the Ace of Swords, the Excalibur of victory. So even though everyone goes in the wrong direction, their goals are still achieved pretty solidly. Justice, the card of Karma and of ‘ you get what you deserve ‘ is not liking this one bit and wants to make those victories moot. So I think while goals are achieved, they're like the pixels making up the program. They go away the moment you log off or turn away to look at something else. They're not worth anything if they're not looked at. If that makes any sense.”

“Other than that, that's what's standing out here in the cards. I would not be surprised if you were either out of a SL job or just off SL period at the end of December of 2011 or January of 2012.”

I asked if he meant superficial victories, “I think the word I'd use is that they're all mirages. They're not even superficial victories. Even superficial ones linger. These do not. Everything works well in that one specific moment in which it happens, but the moment it is put down it is forgotten. And no one cares to go back to it.” So he foresaw troubled times for the paper and Second Life? “In a nutshell, yeah. It's like you produce your material, people ‘buy’ it, but it either is not read, or not ‘absorbed’ or something. The stuff doesn't stick. At least according to these cards, anyway. ... Something needs to galvanize the people of SL into a collection of individuals, rather than the mess of things it is now. I -want- to say no organization. Not enough to get -all- involved, which is what I think is to happen. It's not even about ‘ toppling the 800 pound gorilla ’ even. Some grid wide mega event needs to happen free of Linden Lab’s mismanagement.”

“Anyway, those are the cards. Too bad they were not any better; this is one of the more negative reads I've had in the last few weeks.” Xymbers did admit he was wrong on a couple recent readings, “Things like that come and go though. The first couple months of a year are always slow and unfocused as the year gets underway.”

And when someone else did a reading on him, it turned out wrong, “It was mostly warnings about people doing power plays and how people have entered certain businesses only to lord over others, so ‘ watch yourself. ‘ A few things that were almost certain to happen didn't, which was a surprise to both of us. Now I have to go back towards the end of this month because one of the power plays was a few weeks ‘ late ‘ and I have to see if things have changed from its previous incarnation. ... Yeah, always more readings. But at least we act on the knowledge. The reading I got for you suggested no one cared enough to react about anything written or whatnot.” 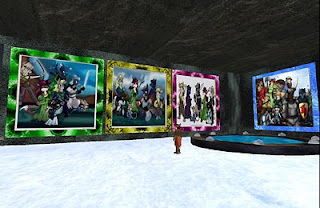 Besides his fortune telling, Xymbers has also been developing a story for self-publication on the Internet. “People will get to decide how the story progresses at points,” he explained, “The viewers will have a say as to what the heroes do. And if the viewers make the wrong decisions, it might be a ‘Total Party Kill.’ “ He went as far as to have artwork for the original set of his characters commissioned, which are set up in his dragon’s lair.

The story is around several characters in a future Earth of which humans are gone and the world is populated by “Anthro-Kin,” living in a Medieval society of which those with the talent and patience can learn magic. He originally had nine characters, some heroic, some anything but. But the more he thought about the characters, the more he realized some would have little reason to stick around with certain ones, “that adventuring troupe was going to be the focus of the story but they wanted nothing to do with each other and I knew it was bad when my ‘self insert’ wanted nothing to do with them either. ... My characters actively fought me at every step. ”

So he chose four new characters whom could stick in a group, “I finally gave up and asked ‘who wants to come forward,’ and got four volunteers. I'm still banging things out around them though, so I don't have much more than that for now. ... it starts on the 1st and I'm aiming for a twice a week schedule.” Later on, he told me of a fifth character coming to mind.

Of the five characters, the first is Ameris the “bovine bladesinger” whom despite dressing up as a Valkyrie and carrying a long axe insists she’s no warrior, "I'm not a barbarian, I'm a mercenary!" Then there is Target, an obnoxious thin and wry wolf whom dresses in second hand leather outfits, "I'm either in trouble, getting in it, getting out of it, or taking credit for it." There is Soyal the sorceress, a white cougar whose real name is a mystery and dresses all in pink, and woe to those who laugh at her outfit. Fourth is Thrana, a quiet snowshoe hare whose oversize feet can do serious damage, "Actions speak louder. I'll let my paws do the talking for me." Last but not least is Zelda, a blue eyed vixen water sorceress.

Xymber’s story, currently with no working title, is on his Livejournal. More on his fortune telling can be read from the article on him at Second Life Newspaper, and he also does business from a website. His place, Wyvernhome, is at Sunweaver Air at (184, 87, 26).