While I was growing up in the 1980’s, wrestling was fairly popular. My friends loved to watch the shows of “good guy” characters like Hulk Hogan beat up the bad boys. And when the bad guy was from Russia or Iran, the emotions could get pretty raw. There were wrestling video games, and even a cartoon show.

But later on, the wrestling scene changed. To paraphrase Jesse “The Body” Ventura, it looked like everyone was a bad guy and the heroes had left the scene. And so most of my friends didn’t watch or talk about wrestling so much any more. And when they did, it was often about it’s glory days, either of the 1980’s or 50’s. 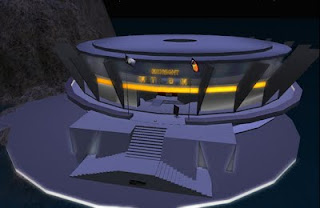 It was probably inevitable that those whom looked fondly at those days would seek to bring wrestling into Second Life.

Not long ago, Sam Nightfire invited me to a wrestling match at the UWS Metrodome on the Virtual World Network sim. I was a little late, but there was still a special fight left, “glad you made it. This match is the ladies championship.” Now males have a reputation of loving to see women fight. But my reaction was a little different, “Um, why am I thinking this may be the most vicious, merciless of the fights?”

Some guys think women can’t fight. That all they can do is slap each other and tear at each others clothes. It’s my experience that this is far from the case. What women lack in strength, they often make up for it in tenacity and strategy, hitting where it hurts, and doing it again, and again, and again. A few can be quite brutal and ruthless at it. Years ago, I read about one tabloid reporter whom volunteered to go at it with a lady wrestler of a semi-professional ring, and the “bad girl” quickly had him begging for mercy.

The match was between Roxy Rockett and Gwenivere Swansong. Because of the number of people around, I didn’t see anything at first. Then one, and the other lady wrestler appeared through the rezz, as well as the guy referee. The action appeared slow at first, though the chat told it was anything but. “YOUR TURN GWEN!” ::catches her breath, closing her eyes from the pain:: “You a**hole!” Following a loud thump, “Hee-hee! You reaaally think it was going to be that easy? Wow, you are really stupid.” “Oh, I’m SO hurt!” 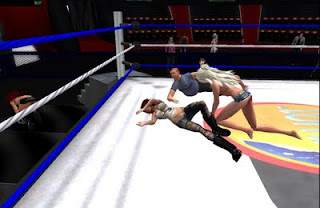 Before long, the animations weren’t so much affected by lag, and the actions became clearer, the grapples, the kicks, the body slams. I winced, imagining what damage and scars girls in real life would be getting. The two tigresses continued the carnage, one getting a brief hold on the other only to be knocked away. Finally Gwenivere pulled a “stunner” on Roxy, “And THAT, is how you get ROWDY!!” She then pinned her opponent, and the referee counter, “One! ... Two! ... Three!” Roxy then dislodged her, but it was too late. She cursed as the bell rang it’s victory chimes, and the audience roared, “HEEELLLLL YEAAAAHHHHH!!!” Gwenivere was awarded the championship belt, and raised her trophy up in the air proudly.

Not long afterwards, I had the chance to interview the athlete.

Gwenivere Swansong: ::laughs:: Well, actually I began as a fantasy roleplayer. Plus it's a stem from my real-life name Gwendolyn.

Gwenivere Swansong: I found out that there was virtual wrestling through my friend, and later mentor, Curt Bombastic.

Bixyl Shuftan: I wasn't aware of official women's matches until tonight. Is this something new?

(nearby wrestler): There's been women's matches about as long as there's been SL wrestling.

Gwenivere Swansong: Nope, actually there are women's divisions in most feds. even one designated to only women. Though, UWS is one of the first to make their women's division a priority and not something placed on the back burner.

Bixyl Shuftan: So how long did it take to become one of the wrestlers here?

Gwenivere Swansong: Not very long at all. Because of my history with roleplay, it was easy for me to understand the meter system and emoting. I was told I took to it pretty naturally, though everyone's training period depends on their own levels and time that they can dedicate to it. I spent , I think, about three weeks training. But still I learn new things everyday. 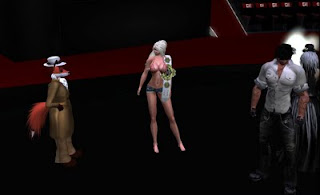 Bixyl Shuftan: Sounds good ... When people imagine guys watching women scrap, they usually think of guys drooling, staring off into space. What has your impression been?

(several laughs and boos from nearby bystanders)

Gwenivere Swansong: ::chuckles:: We all have fun here, and the occasional good spirited flirt has been exchanged. But when it comes down to the true grit of it, the women of the UWS are respected as equal wrestlers; not just pieces of tush in revealing clothing. We are allowed to be who we are and enjoy what we do without harassment, but on an equal playing field.

Gwenivere Swansong: Our matches can last anywhere from ten to fifteen minutes, well, lag permitting. Though most matches do tend to run over, but it's mainly because we end up really enjoying ourselves out there and revel in the fan's reaction and the ambiance that both they, the commentators and the wrestlers create.

Bixyl Shuftan: Sounds like quite a few memorable moments happen.

Gwenivere Swansong: Yes, I can honestly say that most of my most memorable moments have been in the arena. Whether it's training, performing or just goofing around with my fellow wrestlers. We love what we do here. I really feel like UWS is my home and I have a great time here. The wrestlers, they are my family.

Bixyl Shuftan: Goofing with the other wrestlers ... anything especially hilarious happen?

Gwenivere Swansong: ::laughs:: TONS! We have such a lively bunch of wrestlers here, it's hard not to have a good time. All the way from Derrick zane's many voices, broly's antics , the list just goes on. We are, well, a colorful group of people, to say the least. Falling out of the ring because someone accidently clicked the ropes, word goof ups, just endless.

Bixyl Shuftan: (chuckles) In your opinion, what was the one most worthy for a sports blooper TV show?

Gwenivere Swansong: Aah, that's like trying to pick your favorite song. Hmm.. it would probably have to be a current one between me and Rose. We might be rivals but we also have our moments. We were in the ring a few weeks ago when we were practicing for the one on one match. Well, it was one of the times where the rope wasn't clicked and rose ended up ... eh ... le’ts just say, that for the position we landed in, ... well (blush) you might have seen on “Skinamax.”

But, as I said, that is just the current one that comes to mind. Between lag and hud malfunctions, there is always room for strange things to happen.

Bixyl Shuftan: So now that you've won, anything to say to your fans whom might be reading this?

Gwenivere Swansong: Only that through hard work, dedication and a positive outlook, anything can happen. People focus so much on negativity or think they have to be a jerk or bad*ss to make waves. I want my fans to know that class isn't dead. There is a saying: nice guys always finish last. Not the case... this time. The nice girl finished first.

Bixyl Shuftan: Thank you for your time, Gwenivere.

Gwenivere Swansong: Thank you for yours as well. I hope to see you coming out again to see us.

With Sammantha hanging around there, I’ll probably be back again soon. But still, women’s wrestling is not what I would call a spectator sport for the timid. “Catfight” my tail. More like pantherfight or lionfight.