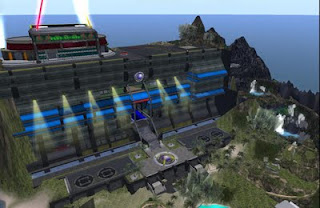 While the Passionate Redheads were doing their “Bid Me Human,” a Trek group was doing their own Relay for Life fundraiser, a “Jail and Bail” by the UFS in the Starfleet Sector 002 sim.


Commander Kermie Mistwallow is in the brig for the 2nd of 3 days on charges of aiding and abetting a known fundraising effort! As part of his punishment for his crime, he may have to shave his head - but only you will be able to decide that through your donations!

This jail and bail ends tomorrow, Sunday, May 22. At the end of that time, Commander Mistwallow will be freed and the punishment extracted upon his hair that you have determined! He's already going to go bald for a week. Will it be longer? 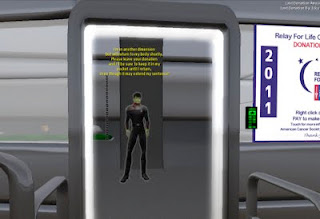 Deciding to take a look, I beamed over, and the two cells I saw were empty, with what looked like a cardboard cutout and a mannequin in their places. Also, the walls were missing, so I thought my computer was being slow and taking forever to rezz. One of the crewwomen, Zania Turner, was there. When I pointed out what I couldn’t see, she clicked on something, and the wall plus a number of details appeared, “We use a lot of rezzers to save on prims.”

I talked to Zania a little about the event, “Our jailbirds have left holograms up, as they are currently sleeping ... If we can get L$100,000 in donations, these guys will go bald, along with most of our Engineers.” As of late Saturday afternoon, they had raised 37,000 Lindens, “He'll be freed after 3 days, and the punishment will be extracted on his hair dependent on what people donated. And the CO of an outpost, and most Engineers, will also follow suit and honor that same hair punishment.”

Of how the idea came about, “I've heard of other jail and bail events that were pretty successful. We were trying to consider what we could do for our fundraisers for this year. When I saw something on TV for the St. Baldrick's Society, I figured that was the perfect ‘ marriage ‘ for an event. St. Baldrick's is a group where the members shave their heads and go bald to stand in solidarity with kids that have cancer. My brother had cancer as a kid, so this was something that kind of hit home in a sense.” 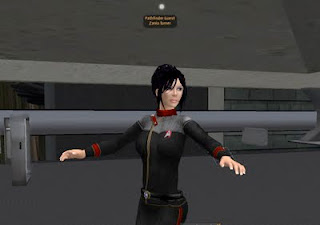 Zania expressed doubts that they could do another fundraiser like this anytime soon, “This is really the last fundraiser we can have as the group that we're in is in dire financial trouble. If we don't raise money for our group, we're going to lose a region. That's why we need to make this one for Relay For Life big. ... We just aren't getting the condo rentals that we need to support us having both regions. We may lose one, if not both, if we don't increase our donations or condo rentals very soon.”

Zania told me a little about the UFS, “We started out as one region, and actually were part of another group until differences in leadership resulted in a split. Since that time, we have forged our own future within the Star Trek universe and acquired a second region. Our RP is based around the Delta Quadrant, where we have picked up the adventures following the return of Voyager to the Alpha Quadrant. As an organization, we are similar to SFI or The Federation (IFT) in that we provide memberships to those who are interested - for free - and they can experience Star Trek in any way they choose. We provide ships and stations for people to be stationed at, and even have a fully functioning Academy that provides almost 200 classes for cadets and members to take.”

At one point, we were joined by another of the group, Simmyish Resident. Zania explained, “Simmy here is in the process of changing, but he's one of our members. He's assigned as the Chief Security Officer for the Pathfinder Research Facility, which is where we're standing (in the Security deck).” They told of some of the fun they had with the jailbirds, “teasing in general, like putting tribbles in Kermie's cell (grins).” Simmyish mentioned, “I've kind of not being able to access the locks for them.” He also mentioned that crew members were showing Kermie samples of his favorite beverage and joyfully drinking it in front of him.