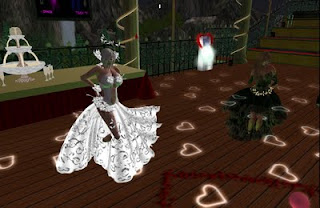 For week after week, month after month, Mystery has been one of the most active romantic-themed sims in Second Life. Every week, it’s Queen of Hearts riverboat club has held events on most days, sometimes two or more a day, both DJs and live singers. And the rest of the sim offers much to see from it’s mountain and waterfall, to it’s balloon ride, to it’s village shops and mystery manor, and much more.

On Sunday May 15th, following a few days of preparation, Mystery launched it’s Fifth Anniversary Celebration. A week of special events and the unveiling of new attractions. Sunday’s event began at 12 Noon SL time, with the ever-popular Debi Latte appearing on the deck of the Queen of Hearts to a large crowd both on the deck and on the dock below. 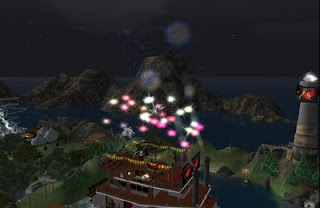 Also there were Mystery’s owner Tygeria Mirabeau, dressed in a revealing white gown, and manager Amythe Moonlight, in a classy black dress. Several other staff were also there. They helped liven things up with a few jokes and comments. So did Tygeria with a few playful flirty remarks to Debi, which occasionally interrupted her songs with a few giggles. Debi sung a number of songs, including the one adopted by the club as it’s signature: “Queen of Hearts.”


Playin with the Queen of Hearts,
you know it ain’t really smart.
The joker ain’t the only fool,
who’ll do anything for you.


In the middle of the songs, the fireworks went off, and the dark skies over the club were showered with colorful lights. Late in the hour, someone appeared on the ship whom hadn’t been seen in a while: Jazzz Hermit. He was greeted with smiles and a warm welcome. 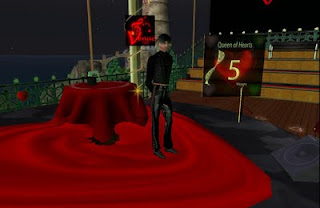 Debi was scheduled to play until 1 PM, but played one more song. She then turned the stream over to Jazzz. Some of the crowd left, but a number stayed to hear Jazz sing songs such as "What Have I Got to Do to Make You Love Me?" He wondered if he was a little rusty, not having sung in a while, but everyone enjoyed the music. Peoples' attention were also drawn to a little bear magician, "The Great Teddini," behind the singer.

Following Jazzz, those attending were invited to see the sights of the sim. This included some new builds, notably the roller coaster a little distance east of the riverboat. And many did.

There would be more events as the week went on, DJs, live music, and some 7Seas fishing contests. But Sunday was a wonderful start to the anniversary celebrations.