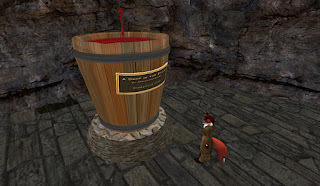 On Sunday Sept 25th, the annual Bid4aCure date auction took place. Held at the Temprus sim, the event began at 11AM and went on for a few hours. A few dozen men and women took part, standing on stage while the bidding took place, sometimes with Jocelyn Sands who helped organize the event. While they were on stage, a song that the participents helped pick played for the audience. Money raised went to the American Diabetes Association and Diabetes UK.

The entrance to the event had a small art exhibit with a few displays. One titled “A Drop in the Bucket” showed a huge container of blood, with drops trickling in from above. But those dops had people inside, symbolic of the charity’s theme. Besides the dates up for bid, there was also a “silent auction” held beside the theater, with a number of clothes, skins, and other items up for bidding. 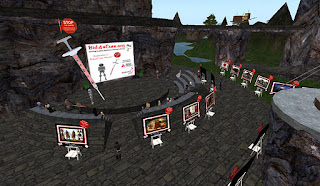 When Shana Kosco was up for bid, the music she chose was hard rock tunes.. She described herself to the audience as “loves art, and BEER.” After some laughter, she joked, “At least no one has talked about my tequila habits.” Someone commented, “A date with Sahana will not be boring, that is for sure.” She went for several thousand Lindens.

EricSteffensen Mistwalker was bid to the song “So Cliche.” He was won by B&B owner Bundy Xue, whose venue took part earlier this year in the "Jam for Genes" fundraiser. Bundy herself was up for bid soon after, dancing on stage to the tune of “Crazy B*tch.” With the winning bid at 10,000 Lindens, she responded, "Skeat says I define a expensive chick." Baxter Hyun was bid on to the tune of "I Ain't Got Nobody." His winning bid was 5K by Panther Miklos. Leira Vaughan went for more, Duncan Bagley putting up 20K for her. 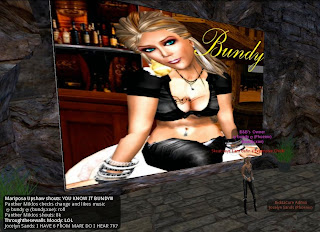 Musician Mack Humbridge performed a little of his music during his bids, with a few of his fans in the audience dheering a bit, one calling out an “It’s a Mack Attack” gesture. Another musician, Edward Lowell, just performed quieter guitar music. One whimsical fellow held a sheapard's crook and rezzed a bunch of sheep around him. This was just a sample of what went on. No doubt the antics continued during the whole event.

Nazz Lane, whom once worked for Second Life Newser’s predecessor SL Newspaper, went for 7,000 Lindens by Briawinde Magic. Talking to him after the date auction, he told me a total of 396,791 had been raised, “Not as much as bigger fundraisers, such as the Relay for Life, but we’re happy with the results.“

Bid4aCure’s website showed a total figure of over 700,000 Lindens raised just after the date auction. They have continued to hold events, and recently their season total passed a million Lindens.

To read about Bid4aCure's date auction in 2010: Click Here.