When it comes to Burn2 and DJs, one can’t go wrong with Qwark Allen. He invited me to listen, sending me a TP, and arriving at the desert I found myself in a platform high in the air with over a dozen avs around, Qwark in a sleek steel skin, resembling a “naked robot.” He was certainly one of a kind. 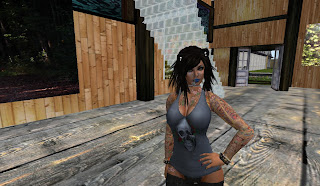 So who else was out there? One of my neighbors told me about another Burn2 DJ: Healer Ladybird. Before the festival, I went over and had a few words with her. She had been logging on since 2007, “I was never into games online but SL hooked me (grin). I used to go to real-life desert raves and was always fascinated with the DJs.”

She had wanted to DJ herself in real-life, but didn’t have the money. She searched for a place that played “underground” music, and found a club called “Piranha.” “They had live DJ that played all genres. .. It became my home ... I hung out there for almost a year until the owner there who was also a DJ, she said if I wanted to learn how to DJ she would let me play there (grin). So she helped me. I got my software & music and practiced like crazy for like 3 months. And I debuted at the club in Feb 2008 (grin).”

She had been attending Burning Life/Burn2 for the past four years, DJing for the past three. She had seen her share off odd sights there, “Even Barack Obama was at my set (grin), well his avatar.” She went on to say the name was a bit misspelled. A favorite build of hers was when someone built some “oil pigs” in the ground that were actually oil rigs.

On Saturday Oct1, the night after the opening day of the festival, she was DJing for a small crowd under a tent, playing psytrance to a small crowd, mostly women. This wasn’t the biggest music event at the desert, but Healer was having fun all the same.

“I always wanted to DJ in real life, but never got the chance to and SL has given me that chance. It’s my passion, I love to play my music and I hope they like to listen. (grin)”

A couple days later, I was walking around, taking in some of the sights of the exhibits. Some were colorful, some were odd-looking, and some were odd looking and colorful. On my mini-map, I noticed a cluster of avatars at one exhibit, so I went closer to investigate. The exhibit, at the corner of "Rod's Road" and "7." wasn’t too colorful, a pale olive color. But there were several people inside, and a couple girls went up to another man sitting up front, one saying, “I brought my bestest friend to see it.” They soon left, and the man, a Oberon Onmura, looked to me, “ Hello Bixyl, enjoying the Burn?”

I asked Oberon what kind of exhibit this was. He answered, “Well, I'm one of the invited artists. So this is an art installation ... It turns on when someone enters.” I posted out the avs already in there. He chuckled, “Oh no, they live there. The ones in there now are bots, the ‘actors on the scene.’ “

And it wasn’t long before someone else did walk in, and things changed. the lights inside looked different, and some odd music came on. Oberon explained the music was chanting Croatian monks. Maybe it was those bots, but the scene reminded me a bit of some UFO abduction experience.

There were other sights that night, but this was the one that came with its builder.