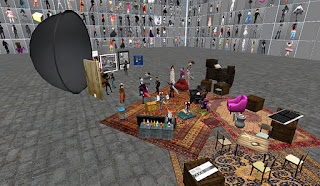 Recently, I met up with Gracie Kendal, the artist behind the 1000 Avatar Project. She was on her photo studio platform over the coyote sim, with pictures of numerous avatars around four high walls, along with a number of people waiting to be photographed, many socializing before and after it was their turn. They, or someone they knew, had answered a notecard she had sent out.


And among the people waiting to get their pictures taken, were the residents of the Sunweaver Estates, and friends.“Nydia, are you ready?” She asked Club Zero owner Nydia Tungsten just after I arrived, and the white vixen stepped into Gracie’s hemisphere photo stand. Among those whom had gotten their pictures earlier, builder Lomgren Smalls, and Club Green Meadows owners ReCoyote Minds & Perri Prinz. There was a waiting list board for residents in line,”If you are here and want to participate click enter on the waiting list.” As soon as Gracie was finished with someone, the name was gone fron the list and the rest moved upward. Those wanting in clicked on the board to wait in line.

The 1000 Avatar Project was started almost a year ago. Someone asked if this was a second project of Gracie’s, “thought we were doing Round 2. (grin)” “Nah,” Gracie answered, “same project just going for 2000.” “Good luck Gracie - I know you'll make it no problem. (smile)” “Thank you, Menubar. (smile)” 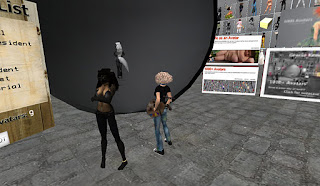 For the photoshoot, Gracie asked her subjects to b ewhatever avatar and wear whatever outfit in Second Life they felt best represented them. They could also have on any AO, or any kind of pose or dance, “You can use any pose, dance animation, gesture, etc. youd like. (smile)”, though did ask that any facelights be removed. Nydia chose to wear a fine dress, “I wanted to look my best for Gracie.” Others also chose their very best outfits, although others chose everyday wear. The pictures themselves sometimes caused Gracie’s computer to pause a moment, and she sometimes had to take a second or third to get just the right pose.

Gracie took pictures of both the front and the back, but those on the wall were of the backsides. With the furred avatars, there were jokes that Gracie wanted a better shot of their tails. Gracie’s explained in the notecard the backside pictures were partily an artistic statement of Internet aynamonimity, and partialy because users usually saw the behinds of their avatars most of the time.

Gracie told me that she had found out about Second Life through her family, “My real-life aunt and uncle had read about it in SPIN magazine. They came in and thoughth it was so cool. especially the art and music scene. They told me I should bring my paintings in. So I came in, and loved it. I think they regret telling me. (laughter). ... but I needed it at the time. I was suffocating in real-life, and this place let me breathe, weird as it sounds.”

“I was working on my Masters degree, living with my Mom and Stepdad at age 33. I had my own place, but was going to study abroad for a year so moved in with them to save money. Then that fell through so I was stuck living with them. It was very stiffling. Then my Dad passed away. It was tough all around. ... I can say SL saved me. But luckily I am finding my way back.”

Of her experiences in Second Life, “I had the usual heartbreak, blah-blah-blah. But it has been an amazing experience. I went to Europe and met some Second Life friends, which was so very cool !” Of her previous work, her most noteworthy was her "My Life as an Avatar" project, “which is what I did my Masters thesis on. That is about my personal relationshiop with my avatar. And before that, in Second Life I was known for my paintings. (smile)” 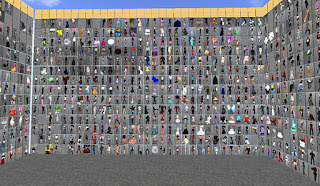 As time went on, more avatars came by. One appeared as a winged demonness, “since it’s Halloween.” Eventually when the last person on the platform had their picture taken, Gracie began putting the new photos on the highest row of blank boards. When a row was filled, she put a new one over it. And as more people arrived, she resumed taking pictures, staying until her shoot was over.