Last week, the man behind the avatar Kev Sweetwater was found to have passed away in real life. Kev was best known for his role in Burn2, the team sent out a notice announcing his passing, and that they would be planning a memorial service on Saturday May 19th at 6PM. The event would be held at Deep Hole, and pictures of Kev were requested. 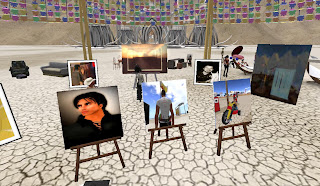 Arriving a little after 6PM on Saturday, the sim was full of people. At times there were more than fifty present. Most were of the Burn2 Community, but there were others. Kev was also a role-player at the Tombstone Wild-West RP, so many others from there were also present and paying their respects. Among those present was Dusty Udal, the former Dusty Linden. There was also Wizard Gynoid, artist Claudia222 Jewell, Dudarling Supermarine, Fearchar "Buck" Enoch, M2Danger Ranger, DollEyes Barbosa, Rails Bailey, whom I was told was one of the first Burners, and of course Gemma Cleanslate. Also there was Charlotte Martinsyde, whom had only recently partnered with Kev.

A tent had been set up for the occasion. With it's colorful top, it certainly didn't look like it was for a funeral. But underneath were various pictures of Kev Sweetwater, including a few of his real life self.

For almost two hours, people shared various stories about Dev. Je was described as having once made it to the Burning Man festival, which Burn2 is based on, which someone responded, "Another good lesson. Don't put off your bucket list more than necessary." Dusty Udal commented, "Well, I for one will never be able to make fresh eggnog without thinking of Kev. … We had an eggnog appreciation club going." They also joked about antics in Second Life involving using burn animations on oneself, and Kev using a fire extinguisher on them. One commented of a pinkish vehicle that looked vaguely like an open mouth, "Of all the things Kev built, the Clam Licker car is still my favorite." "I remember when he was building that thing, kept trying to run me over with it. Nothing quite like turning your camera and seeing that coming for you." 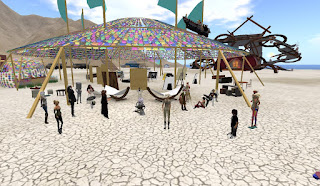 "(laughter) I was Away From Keyboard one night we were trying to set roads, and when I came back Kev had lowered the sim underwater, and left." "He asked me to have his babies, as a joke …" "I blasted him clear across the sim with a kamehameha." One cammed over to the memorial gallery, "I'm looking at this one pic and it's tearing me up, with the t-shirt saying 'NO MOAR PRIMZ 4YU!' " "I made that shirt for him, the front read 'Prim Dictator.' " "My first burn that I got to be a builder, Kev came over and was trying to join my parcel to an empty one. He was so tired, I think it took 3 cups of coffee before he got it." "The first time I met Kev, we talked for almost 6 hours. He could hold a conversation about anything, and always make it seem interesting."

"I won't ever forget the day he showed up in my box, telling me how much Charlotte meant to him, gushing, pouring out his soul." "That sounds like Kev." "I was captivated on how one man could express his being about Charlotte. That's when I knew he had found his love."

Emcee Widget, "So this guy walks into the DMV, and Gypsy and I are talking to everyone. We don't know anybody yet. We are talking about how DMV works and how we work together. And this guys like, 'Well this is pretty cool. I am an Okay builder, but I love to help people. I love Burning Man' he says. And I tell him, 'Find a team to work with.' And this guy starts working with everyone. This is how I met Kev."

Iskye Silverweb, "I knew Kev before BURN - at VWBPE, the first speaker at the conference needed to be introduced. And Phelan Corrimal was supposed to do the intro but wasn't there. I was that speaker's coach/helper/mentor, and so Gentle Heron said, if you do the intro, I'll voice (I'm deaf, so I only do text). And I was standing on the bridge kind of scared. And Kev in his little TV body stood on the other end of that bridge and IM'd to me, 'you can do it, go.' Gentle prompted and I thankfully finished the intro and got back off and Kev's 'good girl!' kind of surprised me but it was nice encouragement."

Katelin Rexen, "Even though he was a busy guy, he still was able to stop and talk say hello. And when I was sick and down in the dumps, when my physical pain was at it's worst, he would always try to cheer me up or ask how I was feeling. That was kind of guy he was, cared for his friends. … Kev, you will never be forgotten as so many here tonight remember the wonderful and caring man you truely were."
"This was nice. Thank you all for letting me stay a while … It's a very touching gathering. I never got to meet Kev, but I know he is well loved and missed …"

After the talk of Kev and some bacon jokes, someone got some virtual glasses of brandy, and passed them around, "… raising our glasses to Kev, cheers." "Cheers!" "He certainly gave of himself for all of us." "Yes, wherever you are now Kev, this is for you."

As 7:30 PM approached, people began taking places near the temple, which had been reconstructed for this special occasion, "I need to be up and close to toss Kev's Ranger hat in." "I never got this close to the other burns, and well, this one is special. So bolt me to the ground, please." "Please remove unnecessary HUDS and attachments." For a while, only the torchlike censers inside burned. Then white smoke was seen coming from the bottom, then the temple became ablaze. "It's beautiful, especially against the night sky." "I don't think I've seen a temple burn so beautiful and bright before now." 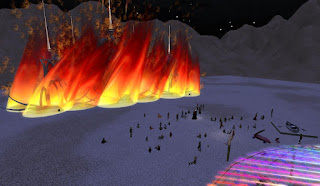 People were invited to leave messages in the temple, and many did, some including, "We will never forget you. You will always be part of our souls, part of our lives." "I'm sorry I took you for granted. I'm sorry I didn't thank you for all the work you do. I'm sorry I didn't tell you how special you are." "Kev I will miss seeing you in Amiville and at the SL Birthdays. Godspeed!" "Gone but not forgotten. You will always be part of us." "My darling husband, I love you, forever and always … Charlotte." As the the temple burned, the messages were released in poetic form.

Other messages were spoken by those attending as the flames lit up the memorial grounds, "Celebration of a life lived well in Second Life, and real life." "This is for you KEV!" "Yeah, burn for Kev!" "God bless you, Brother." "You will always be my Brother, Kev!" "May the road rise up to meet you. May the wind always be at your back. May the sun shine warm upon your face, and rains fall soft upon your fields. And until we meet again, may God hold you in the palm of His hand.""Rest in peace my friend, 'til we meet again!" "Go in peace and love, little brother. And save me a seat!" "God speed, you wacky son of a bitch." "Hope someone calls me that when I go." "Love you always, my darling."

Eventually, the fire began to burn itself out. And finally the flames were gone. There was only a few blackened timbers standing up, and burnt debris and ashes on the ground. "The best I've seen in Second Life." "Just Awesome." "This is a celebration of life! We can applaud this awesomeness!" "This is the latest I have been in Second Life in about four years." "Thank you so much whoever did this." "It was a wonderful tribute." "Awesome burn, go with the flames." "Good bye Kev, safe journey." "Thank you everyone for being here and making this happen. Don't take anyone for granted. If someone is special to you, tell them." "I'm sure Kev's in 3rd Life looking down on us and smiling."

Over time people gradually got up and left the sim, the number remaining becoming fewer and fewer, until all were gone. But the memories of what took place remained.

"Nobody dies as long as they are remembered."