I am writing to you because someone suggested that I do so before I decide to close out my account. I am completely disgusted with Second Life, but others have convinced me to give it another try. Several incidents have happened that have me very, very upset. I am only in Second Life a month, and I have heard that most folks leave over the things I am about to talk about. I don’t want to be another of those people. Really, I don’t. I came here because I wanted to learn to build and to meet people, especially females for romance and having fun.


The first incident came when I was on one of the sandboxes over by the Ivory Tower of Primitives. I was minding my own business when all of a sudden I was surrounded by pictures flying through the air that were so graphic and pornographic that I can’t even name what I saw here. I am a young guy and hardly a prude, but this stuff was truly over-the-top. I stood there helpless, and suddenly the “attack” stopped. I found out from other folks at the sandbox that this was a grief attack, and that they were relatively frequent in sandboxes. People there were laughing about it, and one of them said he had been the one who had ARed the griefer. I found out that AR meant Abuse Report. I was not prepared for my reaction to all of this. The person behind the keyboard became a little tearful and a lot fearful. I was ashamed to share this with others at the sandbox, so I teleported out, and spent some time at a class at Builder’s Brewery. I seemed to be safe there, but I still felt uncomfortable.


The second incident took place at a nightclub that is very well known and well attended. I was dancing with a lovely lady in a gorgeous red satin gown. She had to show me how to use the dance balls, but once I mastered that she IMed me and we had a lovely private chat. We seemed to have many things in common, and chatted away happily. After an hour she said that she felt like leaving, and did I want to come with her. I consented happily, and she told me she would send a teleport to me once she got home. When the request came, I clicked on Teleport as she had instructed me, and when the scene came into view I was in what looked like a dungeon, and I was behind bars. The lady in red was nowhere to be seen. Suddenly she showed up dressed like a dominatrix, and told me she was now my master. I was stunned but really didn’t understand what was going on. DrFran, to be honest she looked so hot in that outfit that I probably wasn’t thinking straight. She told me she was giving me something and I would have to click Accept on a box to take it into inventory. I clicked and saw an object named Collar, in my inventory. 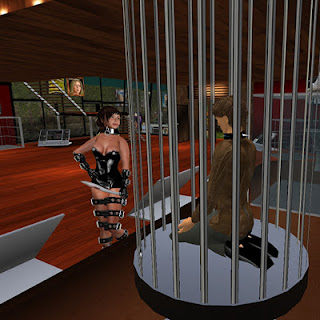 Now, I can imagine you thinking: “What a dunce!” as you read this, but I was only a newbie in Second Life, and had no idea what was going on. The lady in red—now in black spandex, told me to right click on the Collar in my inventory, and select Wear from the dropdown menu. I did that and suddenly had a big spiked collar around my avatar’s neck. Then she told me to click on Yes, when the box prompted. All at once I found I couldn’t move, and the lady brought out some balls like the ones in the nightclub, only when she used them she ended up doing horrid things to me. I had to watch powerless, and I couldn’t seem to remove the collar, even if I knew how to do it. I was even fully clothed! This was not sex, mind you, it was horribly cruel things, and she had a knife in her hand that seemed to spew fake blood. Of course I wasn’t hurt physically, but this upset me even more than the attack in the sandbox.


What can I do about these things? As I said, I don’t want to give up Second Life. I am sure there are good things out there as well. Thanks for your help.
Grieved.
Dear Grieved, I can see from the terms you use in talking about yourself that you don’t feel all that good about yourself, so I don’t want to add to that. However, I really had to wonder if this is a real letter, or if you are pulling DrFran’s leg? Really? You couldn’t figure out how to get out of these situations?
Just for the heck of it, I will assume you are telling me the truth. I am not going to address the mechanics of your problems except to say: Log out !!!! No one is in an inescapable situation in Second Life. My first week in world someone bumped me off a high platform on purpose. At first I was upset, but then I realized that they were probably a kid who figured they could do whatever they wanted in SL. I have learned to avoid places where the jerks hang out: Welcome areas, sandboxes, places that are just about sex, etc.
That said, I can see that you want to use Second Life to make friends, and maybe to improve your social skills and ability to make and keep relationships. You seem sensitive about the things that happen to you. The real task for you is not to figure out how to not get caged physically, but how to not get caged emotionally. It may be time for you to work on loosening up.
I have said this before in this column and I will say it again: If you do what you really like in Second Life, the friends and activities will follow. So, Grieved, what are you into? Want to meet women? Try going to nightclubs where the hosts are watching out for things. Don’t take a teleport from someone you hardly know. Instead, spend more time chatting and getting to know someone. I have never spent more than a few minutes with someone who seems to have interests that are different from mine especially if they annoy me.
Most important of all: Wear Second Life like a loose garment. I know that it is very real, and I am a real person behind my young and pretty avatar. I have real feelings, and have had some intense emotional pain in Second Life. Yet, I don’t forget that without all the pieces of the puzzle together, the touch and the smell and the day-to-day life with other people, Second Life remains a fantasy on some levels, and I can turn that fantasy off by clicking the quit button on my computer
Please let me know that you have stayed, and that you are starting to appreciate the great things Second Life can offer us all.
Yours,
DrFran

Obligatory disclaimer: The column Ask DrFran is the work of DrFran Babcock, and may not reflect the views of SL Newser as a whole. Please direct any correspondence to DrFran Babcock. I look forward to hearing from you.