A Day of Relay Events

Saturday March 23rd was a day full of events for the Relay For Life. Numerous teams had events planned, large and small. And all of them cheered each other on through the volunteer group chat. 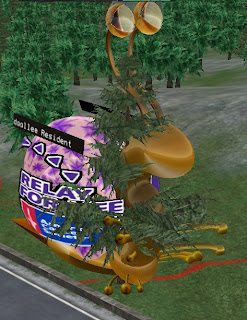 At 11AM was the biggest event in terms of area it took place on: the "Cross-Country Giant Snail Race." Organized by RacerX Gullwing and his team, his Giant Snail Races usually take place on an obstacle course in part of a sim. This marathon took place over 45 sims on the Mainland, going by places such as "The Shelter." For the Relay, RacerX and his team are known as the Giant Snail Relay team.

About a dozen racers donned giant snail avatars, and took part in the course. There were a few problems unfortunately for both contestants and onlookers. Forks in the road had arrows to help guide the racers. Unfortunetly, lag could sometimes hide them, from both racers and people trying to keep up with the action. The snails could also get caught in obstacles hidden by lag, such as trees, in addition to ban lines from peoples' houses on the mainland. The exact time the race took wasn't available when this article was written, but these cross-sim races often take over forty minutes before the first racer crosses the finish line, and an hour before most contestants have gotten through. Alden Cortes' snail was the one who won the race. Stay tuned for the race to appear on the Treet.tv archives soon. 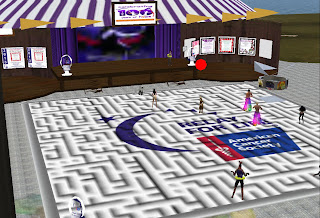 The Giant Snail Relay might have had the largest event. But there were plenty of others. The Unmasking a Cure team announced a "Sink the DJ" event, "Unmasking A Cure team is kicking off our first event with DJ Chris Crisis! Come on down …  We'll be here all day! Hope you can stop in and have some fun with us!" Getting there, it was a small but enthusiastic crowd. The DJ and hostess were sporting ducky water floats, "Pay the kiosk 100L, and I'll take your request. Show your love, help unlock a cure!" Near the dance floor was a small pool, presumable where the DJ would end up if enough cash was donated. The event went on for about eight hours. 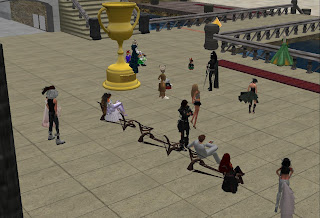 At Celtic Isle, an "En Garde" fencing tournament was held. Panza Elde announced the competition to Relay chat, taking amusement to the variety of avatars, "Another match about to begin, bird vs bunny." Heading over, the contestants were a variety of human, furred, and tiny avatars.  More than 11,000 Lindens had been raised at the event, the winner being Capt Blinker with Stero Nacht a close second. Capt Blinker joked, "I cheated, I tied Stereo's shoelaces together. (grins)"

There were other events that day. The Sunbeamers held a special "Purple Passion" Relay event that night at Club Cutlass in Sunweaver Space. How much was raised at the event is unknown, but as of the writing of this article, the team was comfortably in Bronze status with almost 32,000 Lindens. Harmony for Hope held a "Jail n Bail" in which Sunshine Zhangsun found herself behind bars, "I am too cute, so they threw me in jail. *pouts*"  "I'm sure it's well deserved." "Yes! Oh wait, I mean NOOOOO!!" And there were some more jokes about "Stinky the Skunk" and his continued presence at the Relay Rockers. It would be a few more days until the Rockers were finally free of their long lasting "skunked" status.

There will be many more Relay events big and small in the coming days and weeks. You can find some posted in the Relay For Life in Second Life webiste Here. A new website was also revealed which keeps track of various RFL blogs and those of friends of the Relay.