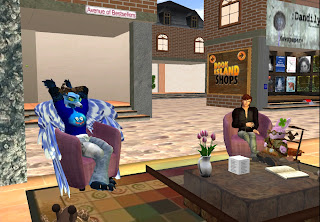 When I was at Book Island last time, Jackson Arthur told me about a beta reading for 100 words so stories for the following week. This sounded fun to me, so taking a mere 5 minutes or so I write a 100 or so story (It went over 100 a little bit but don’t tell Book Island that). I warped over to Olivia Whitsend’s office as she hosted the event. I ran into Relish, the small tiger from last time, and I found out that he is also Brokali the blue alien!

Then my Exodus viewer kicked me off, and I had to log back in. I was telling everyone in the Book Island group that I had a good story, and here it is. Danger Dave had created a notecard launcher where when you send the white square in the middle of a table your notecard goes to everyone in range.

At a telemarketing job was a man and woman. One day Sally pleaded with Phil to borrow $5. Phil said he didn’t like lending money as most times he did not get paid back. But eventually Phil caved in. One day Phil asked Sally if she could he pay him back when Sally got a fat check from a lot of sales. Sally smiled and said she had bills to pay. When Sally was short on money she asked around and no one lent her any money. Phil would have of said yes, but she didn’t pay him back. That night after work Sally had no bus fare and had to walk ten miles in the rain back to her house. As a result she became sick and was unable to come to work the next day. 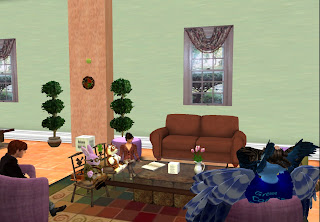 I got positive feedback on grammar and Relish/Brokali suggested words to add to the power of my story. Everyone’s comments did add to my story.

Jackson Arthur wrote a piece of him using words like jink and pirouette, his character used many fancy words to describe his character wanting to get away from Robert. It ended that he only has enough time for one word.

I will have to be rude. Might be fun! Use your imagination to think of what word Jackson Arthur may have used. 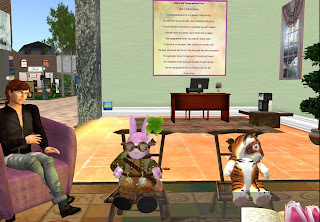 Silver’s poem also had a strong message of a woman walking towards an abyss with footsteps of sorrows and sins. The message I got from her poem was someone thinking of ending their own life after living a depressing and sorrowful life.


Olivia hosting the event gave out a notecard of ideas for next week for 100 or so stories. One of the ideas was gangnam style! I complained saying, "Noooooo! I don’t want to write about that!" Olivia said of course you don’t have to write about that it was only an idea. I assured her that it was an attack on gangnam style not on her. Another suggestion was “Rock and roll is the hamburger that ate the world.”