SL Newser reporter Grease Coakes will soon have his second real-life book published.   “Ginny Griffin and Friends” is a sequel to his first children’s book, “Ginny Griffin’s First Day of School”, which was published last year by lulu.com.  I met with Grease at a local restaurant recently to chat about his newest book.   The following is an edited version of our discussion.


Grey Lupindo: What's the title of this one?


Grease Coakes:  “Ginny Griffin and Friends”...[It’s] the sequel to "Ginny Griffin's First Day of School" and is a direct tie to the first book.


Grey Lupindo:   It should be easy for readers to find it.


Grease Coakes:  It's a little longer than the previous book.  Someone who read the book compared it to Encyclopedia Brown, but I don't think of Ginny that way.


Grey Lupindo:  I'm afraid I haven't read the Brown series, although I've heard of it.


Grease Coakes:    Encyclopedia Brown is a detective, but that's not really Ginny's style.   She's more like the girl next door with a big heart.


Grease Coakes:   The person said it was a good book so it was a compliment.   Maybe she happened to read a bunch of Encyclopedia Brown as a kid.


Grey Lupindo: Probably so.  What happens in this book? 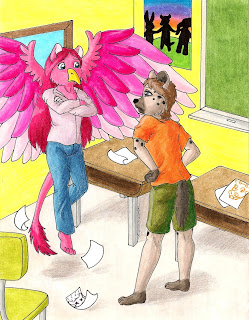 Grease Coakes:  Well, without giving too much away... If you read the first book, Julie Unicorn was a mean girl.   So when Ginny sees her crying and running out of art class, she gets concerned that no one is giving Julie a second chance.  No one else is willing to forgive Julie because she did some really bad things.  There's a reason she turned to the dark side in the previous book, but I won't say what.


Grease Coakes:   Ginny risks all by trying to be Julie’s friend.  As a result Ginny is alienated throughout a lot of the book.  Oh-- I can say there is a cool action scene, but I won't say where in the book.


Grey Lupindo:  Let's give readers a hint. Is it a chase?  A fight?


Grease Coakes:  A fight.  Most children see a school fight so I don't think this will be anything new.  But one of my co-workers called me a terrible person for having a fight in a children's book.


Grey Lupindo:  If they aren't armed, it will be tamer than real-life.


Grease Coakes (laughing):  No, they aren't armed, but I dunno if it's tame.


Grey Lupindo: Kids see a lot in real-life.   We adults don't like to admit that.


Grease Coakes: Yeah, kids are growing up faster now a days and are exposed to more.


Grey Lupindo: Books are a good way for kids to work through the scary RL stuff.


Grease Coakes: Oh sure, especially when the characters are children.  They relate to children more than adults.  They see adults as mean people who forgot what it's like to be a kid.


Grey Lupindo: Can you tell me a little about Ginny’s world?


Grease Coakes:  The world of Ginny Griffin is different than the world we have in real life.  After their World War 2 they decide to stop putting money into war.   In the 1960's solar power is invented and widespread.  I can say that this book shows more of that technology.  More money is being spent on science and education.


Grease Coakes:  Politicians aren't corrupt.   They actually do their job.  Bad things still happen, but it's not as bad our world.


Grey Lupindo:  Where do we sign up to move there?


Grease Coakes laughs.:   You can read my book to travel there for a while.


Grease Coakes:   But a neat part of the book is that I cross over another story into this children's book.


Grey Lupindo:  What do you mean by "cross over another story"?


Grease Coakes:   Well, Rio the Otter happened to buy my writing skills at a tail sale around the same time I started writing this sequel.    He said he wanted a summer beach story.


Grey Lupindo:  Were you able to combine both story lines?


Grease Coakes nods:   Rio shows up in the book, and he meets with Ginny and Phil, her father.  I won't say how or why they meet though.  But what Phil shows to Rio is pretty amazing as he works for a tech firm.


Grey Lupindo: Cool!  So how do readers find your book?


Grease Coakes:   I just got the cover picture last night so it's not ready yet.   But when it's ready it will be on www.lulu.com.


Grey Lupindo: Will it be out in time for Christmas sales?

Grease and I continued to chat for a few more minutes about writing and Second Life.   He gave me a short excerpt from the newest Ginny Griffin book.   Like his first book, this one is set in the colorful town of Spoonville.  He has created an imaginative world where the art teacher, Ms. Harriet Hotchkiss, is a cobalt blue peacock and the children, like Harry Hyena, are animals.   But  real-life children will soon realize that the fictional children face a lot of the same issues and obstacles that they do.  They should be able to relate to the characters as they are entertained by the imaginary world.


“Ginny Griffin and Friends” by real-life author John Krauss will be available soon in the children’s book section of lulu.com.

Grey Lupindo
Posted by Bixyl Shuftan at 6:00 AM