Muertos Okawa and Her New Book

Bixyl told me about a new author within the amazing realm of Second Life. Her name is Muertos Okawa (Muertos Ashbourne) and she just released her book on amazon.com. I took the time to meet with Muertos at the Ark the popular furry club http://maps.secondlife.com/secondlife/Quarabia/100/129/501 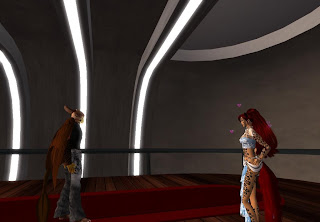 “What Dreams May Come, Kara’s Journey,” was interesting to read as I bought it for all of 99 cents and read it on Kindle reader on my computer. When I asked Muertos about her book she had this to say, ”It's been something that I have dreamed about since I was back in Jr. High, but for whatever reason, I never finished a story, or was unwilling to let anyone else see it. But finally my husband gave me the courage to let this one go and to let others see it.” Sorry guys Muertos is taken but you can still read her steamy book.

Muertos explained, "It is an erotica/romance depicting the journey of emotions that take place when the world of reality and fantasy collide."That’s certainly the case as I began reading the first few pages of her story. I won’t say anything. Kara is a lonely secretary who is looking for something more to fulfill her life. What she finds is more than she may be able to handle. Muertos said a second book a sequel to this will be written soon.

As writers we were talking to each other as characters take over and write their own dialogue and actions. I told her, "I've had characters that are growing on their own. Greg Griffin and Glenda Griffin might walk into their own stories. It seems as if the characters have a life of their own. And Ginny Griffin as the girl next door she certainly deserves more stories."

Muertos smiled, "Exactly. It's like I gave her life, but after that, I'm just the director, it's her life and she lives it like she wants to. Her fantasy becomes very much a part of her daily life, but to the exact extent, I cannot say. Not without giving away the ending."

For the people reading this article wondering whether or not to buy the book, I’d say it’s certainly a fun read. Muertos did say this was aimed at the lady audience. But when she mentioned it had adult themes I couldn’t resist. Her and I mentioned that sometimes we had to go back and fix the story.

Muertos told me, "Oh yeah. She took me in directions I hadn't planned, even in this first story. I found myself writing a paragraph and then having to redo it because it just didn't sound like Kara anymore." I had to do the same and rewrite the whole ending of my children’s book. 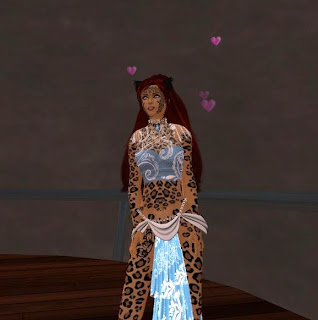 Muertos and I just talked for a while about our characters and writing in general. She did say this about Amazon, "That's one thing that I thank Amazon for with their Kindle format. I can write, and they don't have a million miles of red tape for me to go through to get my stuff out there."

I pretended like I didn’t know anything about writing and asked Muertos if she had any advice for anyone wanting to become an author. Here’s what she had to say, " Advice: Best thing I can say is just write what you enjoy. If you enjoyed writing it and it's something that you're proud of, then don't get too hung up on whether anyone else likes it. Some will, some won't. But either way, if you can enjoy the adventure of writing it and produce a piece that you're truly proud of, then that's the greatest reward in itself. As for the adult theme, don't take it too seriously. That's a broad spectrum and very vast audience, so someone out there will share your fetish, fantasy, whatever theme you write about."

Muertos certainly has good advice as reading her story was pretty fun. I won’t say what’s going on you the reader has to buy her amazon book and find out for yourself. I did ask her the burning question as a furry.

"If you're a neko would you ever think of writing a story involving furries?"

Muertos Okawa blushed, "Uhm actually...yes and it will be a later story in the What Dreams May Come series."

“What Dreams May Come, Kara’s Journey” Is an excellent read. I look forward to Muertos’s sequels in her series as I read along her first book. The story can be found at the following link - http://www.amazon.com/What-DreamsMay-Come-ebook/dp/B00F1LSDXE/ref=sr_1_3?s=digital-text&ie=UTF8&qid=1378600502&sr=1-3&keywords=Melissa+Kite