Perri Prinz a long time bunny in Second Life took some time to talk with me about her ongoing series Spectral Shadows. Her artwork which shows scenes in her series is at http://maps.secondlife.com/secondlife/HV%20community/40/206/3001 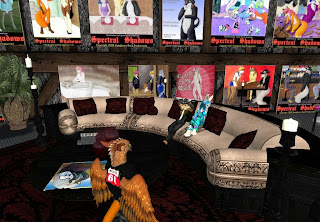 In Perri’s own words, a genetic war on an earthlike planet called Cyngus melded human and animal DNA together to create a hybrid species of animal and human. Most people familiarize characters like that as furries. Her Spectral Shadows series in her words mirrors real life through her many stories. The furries in her stories walk around naked; however their sexual organs are hidden underneath their fur. They only show those parts when each character intends to use them.

On the planet of Cyngus there are many different towns that have their own religion based upon a certain theme. People in a gangster town have a short life span as everyone watches and worships gangster movies. Another town Perri mentioned was based upon the classic vintage movie the wizard of Oz. There’s four bad witches always in power as the good witches can’t wish accidents on the bad witches.

Perri Prinz, “Yes, short life expectancy is a staple of the religion of the gangster town. The Oz town has an extremely corrupt government that consists of 4 witches that are either good or bad. But because bad witches can arrange accidents for the good witches and good witches cannot do the same, there are almost always 4 bad witches ruling the town. “


I said in response, “Wow so sometimes being a good person can work against you. Playing by the rules doesn't always work. Like for example Dusty Coakes a fox who’s a cop shoots to kill when he confronts criminals. It might not be morally right, but as a cop he has zero tolerance towards lives being threatened. He picks the low road and shoots to kill to stop violent people.” I asked Perri does she have any fave characters or any characters readers should look out for. 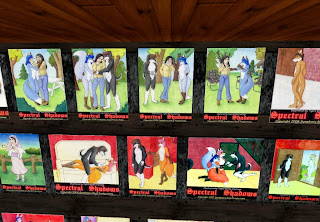 Perri Prinz answered, "Well, Christine, our main protagonist fox girl is pretty popular. As are her companions, Vicki the Blue Vixen and Kacey the pink geek skunk. It's through Kacey that many aspect of Furry Fandom and GBLT situations are explored. Kacey is the only one of my characters to have attracted a seriously obsessed fan who collects anything I can give him of her.

Perri Prinz, "Actually, I have several fans who contact me from time to time, but this one fellow is seriously obsessed with the series, and in particular the Kacey character. Yes, it is very much a mixed blessing having fans and being so readily available to talk to them. On the one hand it's very encouraging and an incentive to keep going, in spite of my failing health, but on the other it puts me in mind of my responsibilities to keep things going, which can be a bit hard for me to deal with in some of my weaker moments."

I said it sounds like a good series and like aspects of her series it creates a religion of her own as she does have some fans along with the fan that obsesses over Kacey.

Dark Shadows, a gothic soap opera from the 60’s and 70’s, was about a gothic family that deals with werewolves and ghosts. The show was one of the influences of Perri’s story series. 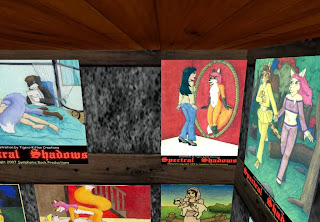 Perri Prinz, "Dark Shadows introduced the concept of the sympathetic vampire. There would be none of the vampire series they have today without that alteration in the vampire concept."

Grease Coakes, "So no Buffy or Angel without that show or being human from the UK."

Perri Prinz, "Actually, it was more like they had to find ways of saving the ghosts, vampires and werewolves from themselves. Such things, even death itself, were like afflictions that could be overcome."

Perri said the Grease Coakes in her series would be unfairly treated as he is different as a griffin. As her version of me has a beak he is treated unfairly by other characters. As a writer for a newspaper he starts to report about this. It shows a theme that she wants to write about people being racist like in real life.

I commented flyers could get in trouble in my story if they abuse their ability to fly. Glenda Griffin pays to get into the zoo fair and square. Another flyer tries to fly in without paying, and is arrested by Daisy Shepard. Glenda is very happy she played by the rules.

Dark Shadows has 1,300 episodes. Perri said this in relation to her own series, "Yes, Dark Shadows, but that is the nature of soap operas. One continuing, ever developing story, containing many sub-plots that come and go, following the storyline of multiple characters at the same time, and airing 5 days a week over a number of years. The episodes add up to staggering numbers. And that's the format I'm working in with Spectral Shadows."

Read her series at http://spectralshadows.livejournal.com/ also go to her gallery in SL at http:// maps.secondlife.com/secondlife/HV%20community/40/206/3001 and see the amazing art work drawn by the punk hippie from Canada.

the.punk.hippie@gmail.com is the best way to contact the artist if you want to hire her to draw for you.

Perri Prinz’s series sounds deep and involved. It sounds like an amazing series that points out the flaws of our society in Perri’s own world of Cyngus. Give it a read!