Interview With Talia Sunsong, Author of "Twilight of the Star Vampires"


A friend in Second Life media recently told me about Talia Sunsong (taliasunsong), whom had written a science-fiction parody: "Twilight of the Star Vampires." She had been at book readings, and giving out links to where one could get the stories.

Today is the last day for free for book 1, then book 2 will be free for 5 days. It's a trilogy. I'm giving a book reading today at 2pm at Open Books at Four Bridges. You don't need a kindle to read it, as Amazon gives free kindle software. 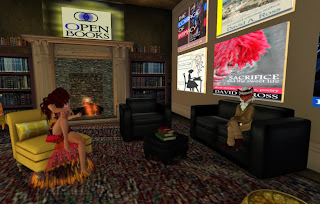 I met up with Talia, Paula Sunsong in real life, at Open Books between readings. She was in a happy mood, as friends of hers had "really whipped up some magic. My book is #1 in my category, parody."

"So how long have you been writing?" I asked her. Talia answered, "I started writing at the age of 10, hoping to become a novelist. I wrote a roleplaying game published by Hero Games. It was a science fiction game ... 'Star Hero.' ... I also founded a free newspaper called 'The Rallyer.' "

I asked her how the paper went. Talia answered, "As a journalist for 'The Rallyer' newspaper, I covered an event where the police started clubbing people. I myself was hit with a metal baton. I had no major injuries, fortunately. Later the police even shot into the crowd with rubber bullets and I was in that crowd." I winced, "Ouch, how many were hit, and how close did those get to you?" "There were within six to eight feet of me. I did not hear of any injuries. The scary part was, I just saw the police shoot. I did not know whether it was rubber or real bullets." "How did the protest get violent?" I asked. She answered, "The police were actually more violent than the protestors. In fact the police beat uptwo2 police review commissioners who were in the crowd observing. The police did not know they were police review commissioners for the city." She paused, "I guess writing satire is a lighthearted contrast to my journalism career." 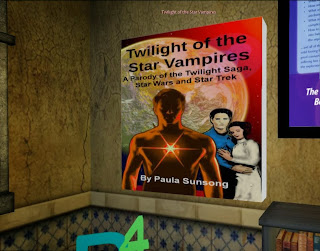 "Star Vampires is my first satirical work," Talia told me, "I like poking fun at overbearing corporate marketing and governments. It has several love stories intertwined with action. It opens with the Vullcan Spocko being turned into a vampire. He asks 'Is logic all that there is?' Later, he turns Edward Cullet into a vampire by force, and kidnaps Edward for the Vulcanturi Empire. Edward has two children with Queen Paddymay: Luck and Lela." She grinned, "You might recognized the similarity to Luke and Leia Skywalker of 'Star Wars,' Spock of 'Star Trek,' and Edward of 'Twilight.'Spocko meets Lela, Edward's daughter, when she is trapped on the Dearth Star. Both Being telepathic, they feel as if they are 'soulmates' but Lela is wary of the Vulcanturi Spocko for kidnapping her father."

I chuckled a bit, "sounds like a number of people and things from those three stories get parodied." "Yes it was fun to joke about well known images," Talia told me, "On one planet they meet a 'Keepler elf of Nabiscko' who makes magic cookies in a tree. The Queen threatens to cut off the supply of Mint Milano cookies if the Senate does not help her. If only that threat worked in the real world to keep politicians in order. (laughter) Another love story is Obegone, the Jetti knight, who falls for Brun Solow (Hans Solo's replacement). Obegone also dated "Jabya the Hot" (Jabba the Hut's replacement in the story)."

"Guess 'Pizza the Hutt' was already taken," I mused. Talia chuckled,  "Mel Brooks scooped me on Pizza the Hut (giggle)." She continued, "Obegone met her at "Singles Roulette" where the men sit on a large spinning floor that spins, placing each man in front of a woman as a date. Jabya does not like being dumped by Obegone, but she gets revenge, having Brun Solow frozen in carbonite."

"Was the Star Wars parody 'Spaceballs' any influence?" I asked. Talia answered that it was, "I enjoyed 'Spaceballs' and 'Galaxy Quest' as inspiration. The playfulness of those movies frees my mind to write. Humor is freeing of creativity" "Were there any other influences?" I asked. She told me there were, "I think roleplaying games gave me the opportunity to play different characters, act out plots and joke with friends. That fueled me for writing. Roleplaying in Second Life can mean a lot of things from medieval fantasy to sexual fantasy." She then winked and giggled.

After a chuckle, I asked, "Did any of these games have an especially memorable plotline and scenes?" Talia's answer was, "In person, I started with Dungeon and Dragons, I liked Champions (the superhero game), Star Hero (the science fiction game I wrote) and private eye/spy games. Later I actually became a private eye in real life. Psychologists used roleplaying as therapy decades before roleplaying games were sold. I think roleplaying gives you a new perspective." 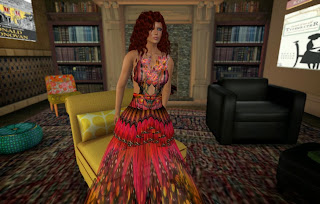 Talia being a detective caught my attention, "How did it go?" She answered, "I was a San Francisco private investigator for 3 years, like Sam Spade (smile). I had one case where I was following a man suspected of injury fraud. An ambassador's car with national flags got in between us. I was afraid I'd be arrested for tailing an ambassador (laughter). After a mile or two, the ambassador's car turned off and I was hot on the trail of the suspect again. One man I videod playing baseball when he claimed to be too injured to work. He flipped off the camera. My boss thought it was hilarious, and played it in slow motion to our whole office." She chuckled, "So you could say roleplaying and the silliness of life inspires my humor."

I asked Talia what were people saying about "Star Vampires?" She answered "I got a great five star review" on the book's page on Amazon, "People have said it is entertaining and yet has meaning in poking fun at mass marketing. Caglevision gave it a 5 star review. He is an author himself. ... My 'Twilight of the Star Vampires' is a trilogy and each book will be free for 5 days. The last one will by close the Xmas, like a gift."

"So what are your plans after 'Star Vampires?'," I asked Talia. "I have a fantasy short story about a witch with faulty powers," she told me, "I'm planning on putting it on Amazon. I also have been writing a book on how I put my diabetes into remission with diet and exercise." Of the witch, her spells don't quite work, "Her spells go haywire. Anything could happen with a spell misfire." She chuckled, leaving it to my imagination as to what could happen with such misfires.

"Any advice for those trying to write satire and parody?" I requested. Talia's answer was, "I like to say "Everyone is born with their own unique genius. Everyone  has a story to tell. I'd like to hear your story and to share mine. Today we have the tools to reach billions of people and 'sing our song.' "

It was about this time the interview ended. We chatted a little longer, then we soon went about our separate ways.

"Don't go to your grave with your song unsung."