Written in response to "Gender in SL." 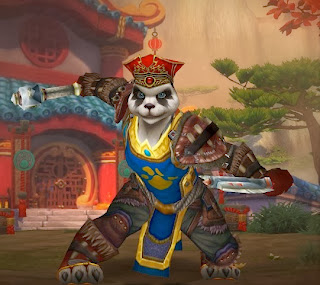 Besides Second Life, I also play World of Warcraft. There, I came up with a number of characters. The majority are male, but there are a couple female characters. For the recent "Mists of Pandaria" expansion, I came up with a female monk "Weynli" (Wen-Li). I kept playing the character, and still spent quite a bit of time on the pudgy but still cute fem fighter.

While a character's gender is fixed in WoW (unless you pay a fee to change it), in Second Life one's appearance is quite maleable. One can go into "Appearance" mode at any time and alter it. And not only are there no shortage of female skins and avatars to purchase, some come in both male and female.

So how often does yours truly take advantage of this ability to swap genders? Very seldom. It's not that I never change appearances. I do so quite a bit, on occasion taking on the appearance of a dragon, griffin, black human, an anthro skunk, squirrel, rabbit, and recently for much of the Halloween season a six-foot vampire bat. But while having no problems changing species or color, it's rare that I take on a female appearance.

On occasion I'll see a girl thinking about getting a female version of an avatar I have that comes in both female and male, and if no one else is around I'll switch for a minute. And there has been a time or two I switched over for a moment as part of a joke on a close friend in private. But just up and doing a gender-bender in broad daylight out in public? That's something I've never done.

So why the difference? Well, World of Warcraft is much more of a "game" then Second Life is. If a guy does a female character, or a girl a guy, I don't usually hear many jokes about it. In some ways, I see it as much like an interactive story, with the player taking on the role of the heroine. 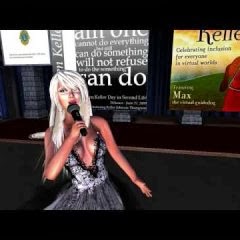 Second Life, well, it isn't exactly a "game," although we call it one sometimes for the sake of simplicity. It's a lot more freeform with many more options for what one can do, including building, selling, and even dating and intimacy. And it's been my observation doing a gender-bender isn't always seen so lightly. Sometimes it usually is. If a comedian has on the appearance of a cute blonde in a dress, yet makes wisecracks on stage in an obvious male voice, people laugh and see it as part of the "joke." But if someone known to be male in real life takes the same kind of avatar and poledances on stage, reactions can differ. While some see it as the equivalent of a guy sharing girlie pics, others will take it as strange, even perverse.

Looking at old time cartoons and movies, one sometimes sees things that one doesn't see in those of today, at least not in G-rated fare. There were times a character would disguise himself as a girl, a wig and dress and sometimes make-up, as part as some ruse. While such chuckles were routine for Bugs Bunny fifty years ago, how often to they appear in today's cartoons, or family-friendly TV programs and movies? Not often.

What happened? My guess is fifty years ago, people weren't quite as mindful of jokes and scenes being taken the wrong way, that it was fine for a subtle joke in a cartoon that would go over the heads of kids and get chuckles from the grown-ups. These days, you have talk shows discussing a gay group's claims that a cartoon character is "in the closet" because of a cross-dressing joke in old cartoons. Not exactly publicity an animation company wants.

Since the 60s, people have been a bit more aware of the naughty side of human nature, as well as aware not everyone's idea of intimate companionship involves the opposite sex. If a guy tries cross-dressing as part of a Halloween costume, unless he's a football player or someone else with an ironclad image of masculinity, the result is getting joked and kidded about being gay and weak. And the consequences can be more than just jokes. Some onetime friends will become more distant, and imagine applying for a job and the prospective employer sees such pictures on "Facebook." And if the guy ends up in divorce court, imagine the judge's reaction to pictures of cross dressing, or kissing a guy after having one too many at the bar?

Some people in Second Life don't particularly care what people think or say about them, that the virtual world allows them to be free, and they can look like whatever they want, or do what they want, short of outright hostile action to others. Others don't feel quite as free. Perhaps they make no secret to real life friends and coworkers about being in Second Life, and worry certain things might somehow get found out. Maybe they have problems getting a date for whatever reason, "Gee, you're a nice guy, but ...", and are especially mindful of behavior that could be seen as deviant and ending any chance of a real life date, even in Second Life under a virtual identity.

On the other hand, many here are avid roleplayers. No one has a problem with a guy writing a story about a girl as the hero, or rather heroine as it's spelled. Video games are full of heroines either using their wits, their guns, or both, to take care of situations. And when Massive Multiplayer Online Games came on the scene, they allowed players the option to play either male or female characters. 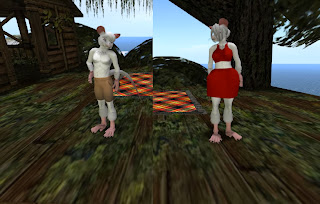 My real-life roleplaying group, there were a few cases of a guy playing a female character. One guy pulled it off flawlessly. Another however did a scantily-clad "chick" that just didn't work. However the first had a reputation as a "munchkin" whom would take on any advantage he could, while the second was a bit of an awkward player.

I imagine some guys also see a female appearance as a kind of roleplaying, that they are "writing" the story of their heroine. While they may join a roleplaying group and sim and change over to the fem look only there, they don't always. They see the appearance as a character living her life, doing things and interacting with friends.

On the other hand, there are a few whom just "like the view from behind." Even if it's not so much, they turn people's expectations of men being naughty-minded and successfully use it as an excuse, saying, "Hey, if I'm going to be staring at a butt for the next three hours, it might as well be a nice one."

In any event, while I may take on all kinds of looks in the virtual world, I'll be sticking with being a male for all of them.

And here, my backside is covered by a tail.