Grease Coakes has done what most of us only dream about---he’s published multiple books.   That feat alone is challenging, but Grease has published in two categories, children’s fiction and adult fiction.  His books are about the Griffin family, who are griffins, and the unusual world they inhabit.


Grease is a long-time SL resident and news reporter for SL Newser.   He’s been on a temporary leave of absence while he’s been working on his book series and other RL projects.   College in Cleveland, which is available as a Kindle book, came out in late December.   The book is described on Amazon this way:    “Glenda Baker, a 19 year old griffin woman, goes to college as a freshman in a world where there's no humans.  She's different as she's colored pink due to her having a white griffin father and a red griffin mother.  ...   She sometimes sees future events.  Follow in Glenda's paw prints and see a different world as she experiences college.“ 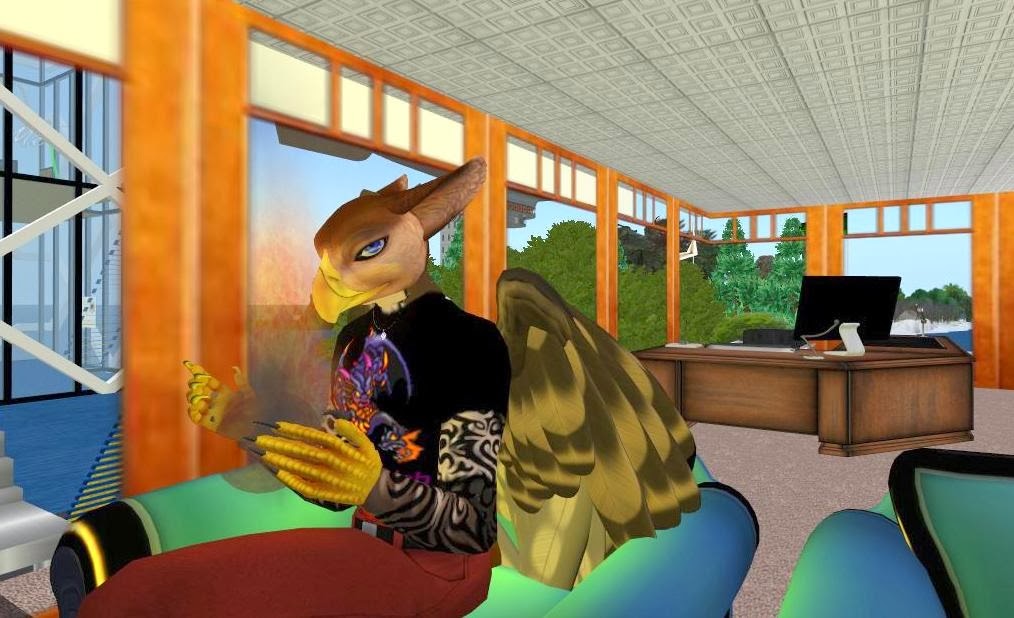 I met up with Grease in the SL Newser conference room a few weeks ago, and we talked about his latest book.


Grey Lupindo:   So tell me about this book.  What has been the response?


Grease Coakes:   Well, my friend Amehana saw it as a journey for the young Glenda Baker, who turns into Glenda Griffin later.   ....  It's more like a prequel.  Ginny Griffin  [the character in his first book]  was more like a springboard for the furry alternate universe.


Grey Lupindo:   Amazon mentioned a "mature theme" or words to that effect.  What does that involve?


Grease Coakes: I think stories aimed at adults have a wider audience.   I'm walking more in that direction with Glenda as the main character now.


Grey Lupindo: Does she encounter sex or violence?


Grease Coakes:   Yes, she does.  Sexual themes and bloodshed.   I can say one character does get it for the bad things he did and is doing.   But the main villain is forced into a “do or die” situation, so he's not a villain just to be a villain.   He actually has a reason to do what he does.


Grey Lupindo:  It must be really hard to promote an e-book. You can't have a signing, for example. Or can you?


Grease Coakes: I know Jackson Arthur from Book Island.   He knows how to promote through Twitter. And my friend Amehana Ishtari can help as well. So I'm not alone.  I can ask for help.   In the mean time I can start on the next chapter of the series. ^.^ 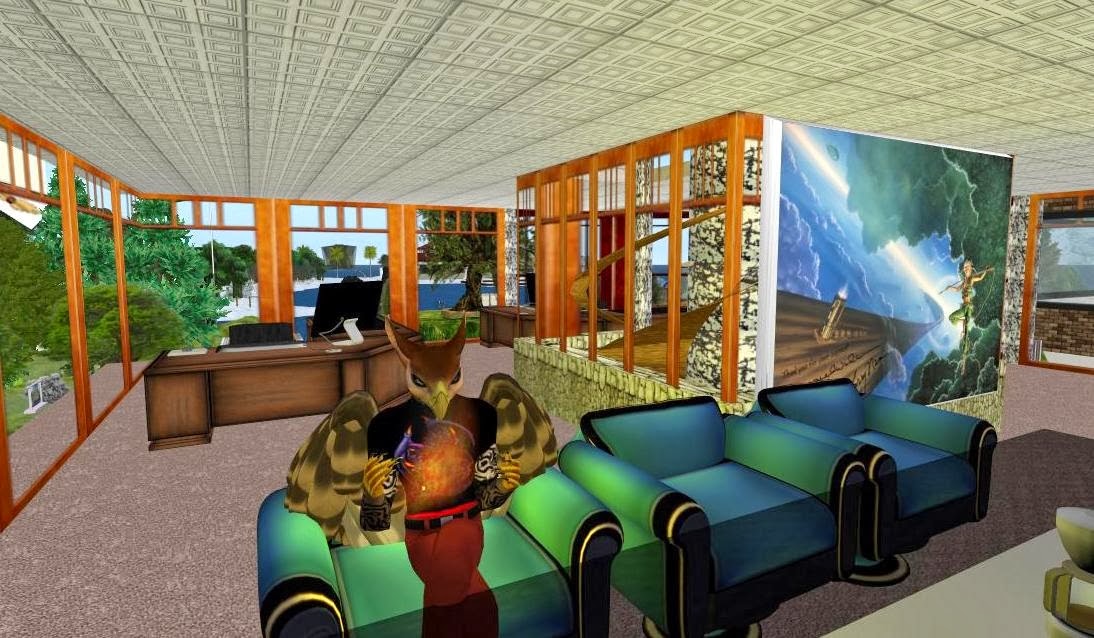 Grey Lupindo: That's great.  I'm so impressed that you've written so much. I'm still one of those "drafts in the drawer" writers.   What's your secret for being able to juggle two lives AND write?


Grease Coakes:  I haven't been in Second Life much lately.  But I do have a routine.  I do my best to write even on days when I work in RL.  A few hours a day gets it done over time.


Grey Lupindo:  You mentioned Book Island and Jackson Arthur. Has that been helpful to you as a writer?


Grease Coakes: Yes, being around writers has been helpful. The micro fiction meetings and his book biz were always fun to go to.  It helped to talk ideas out and hear his ideas and stories.   And I shared my ideas and plots.  Being around like minded people helped to push me to keep writing and not stop.


Grease Coakes:  Oh?  What set apart the good writing group from the not so great one?


Grey Lupindo:  Motivation is hard to keep going.  The good group focused much more on challenges...so many pages per day, per month, etc.   They had mini-contests to help develop writing skills.


Grease Coakes: That sounds like a fun group to be in.


Grey Lupindo: Yes, I miss them.    But tell me about your plans for your next book.


Grease Coakes: Basically the next one is summer in Cleveland.  It's about the characters having fun and having a summer job.  Recurring characters come back, and it shows the underground rave scene.  In RL I went to clubs.   So I'll have fun writing about electronic dance music before it became mainstream, like it is now.


Grey Lupindo:  Neat.  What's the conflict in that one?   Or is that still a work in progress?


Grease Coakes: There will be a conflict or two.


Grey Lupindo: Will Glenda be the main character?


Grease Coakes:  Yes.  She and her roommate get a summer job through a new character, Glenda's mother.  But I can say Glenda sometimes has the strange curse or gift of seeing future events.  Ginny isn't born yet.


Grey Lupindo:  So you're staying in the prequel mode?


Grease Coakes: Yes, eventually the prequels will lead up to Ginny being born.  Well, it's at the start of the story so I’m not giving anything away.   Glenda gives birth to a perfect hybrid griffin which can fly and is strong.  Most of the time griffins are only one or the other.  So at age 15 she legally lets this married couple in Italy have her son for $150,000.


Grey Lupindo:  Why would she do that?


Grease Coakes:  So her college education is paid for and more.   The reverse could have happened --  she would have been stuck with a child and no money.


Grey Lupindo:  Because she's so young?


Grease Coakes:  Yes, it's either she gives up her child for adoption or she faces poverty.   Her father is dead so only her mother supports her.


Grey Lupindo: That's a hard decision she has to make.   Speaking from a mother's point of view.


Grey Lupindo:  It's impressive that you have developed a character that you can continue to grow.


Grey Lupindo: When do you expect this one to be out?


Grease Coakes: Maybe in a few months  if I write a few pages every day.  But "College in Cleveland" just came out so don't rush me.


Grey Lupindo:  LOL.   I can't finish anything, but I expect others to!


Grease Coakes: I have the stories in my mind. Someone will die in the third book.


Grey Lupindo: Now that’s a teaser our readers will love!  Should readers know anything about griffins before they read the book?


Grease Coakes:  Hmmmm.   Something to think about that I read from Wikipedia is that the griffin's enemy is the horse.   Glenda's rival will be as smart as her and stronger.  Glenda can’t just outthink her.


Grey Lupindo:  Yes, the rivals must be strong to make the character better.


Grease Coakes:  Sure, if nothing happened to the character --  if he or she passed every challenge easily -- not many people would want to read about him or her.


If you enjoy alternative worlds, fantasy, and furries, you’ll want to read Grease Coakes’ latest book, College in Cleveland.  Find it on Amazon under his RL name, John Krauss, at  http://www.amazon.com/College-Cleveland-Glenda-Baker-book-ebook/dp/B00HOWGH1S/ref=cm_cr_pr_product_top

Grey Lupindo
Posted by Bixyl Shuftan at 6:00 AM