By Gemma Cleanslate
Some of you may recall that I have written about the roleplay town of Tombstone Arizona several times and my friend did a story about her time there ( though she is no longer there at this time)
http://slnewserplaces.blogspot.com/2013/01/reader-submitted-tombstone-roleplay-in.html. Breezes Babii also did many articles about things she experienced in the towns and she is still happily living there. I went over for the trial of one of my fishing friends who lives in Tombstone. 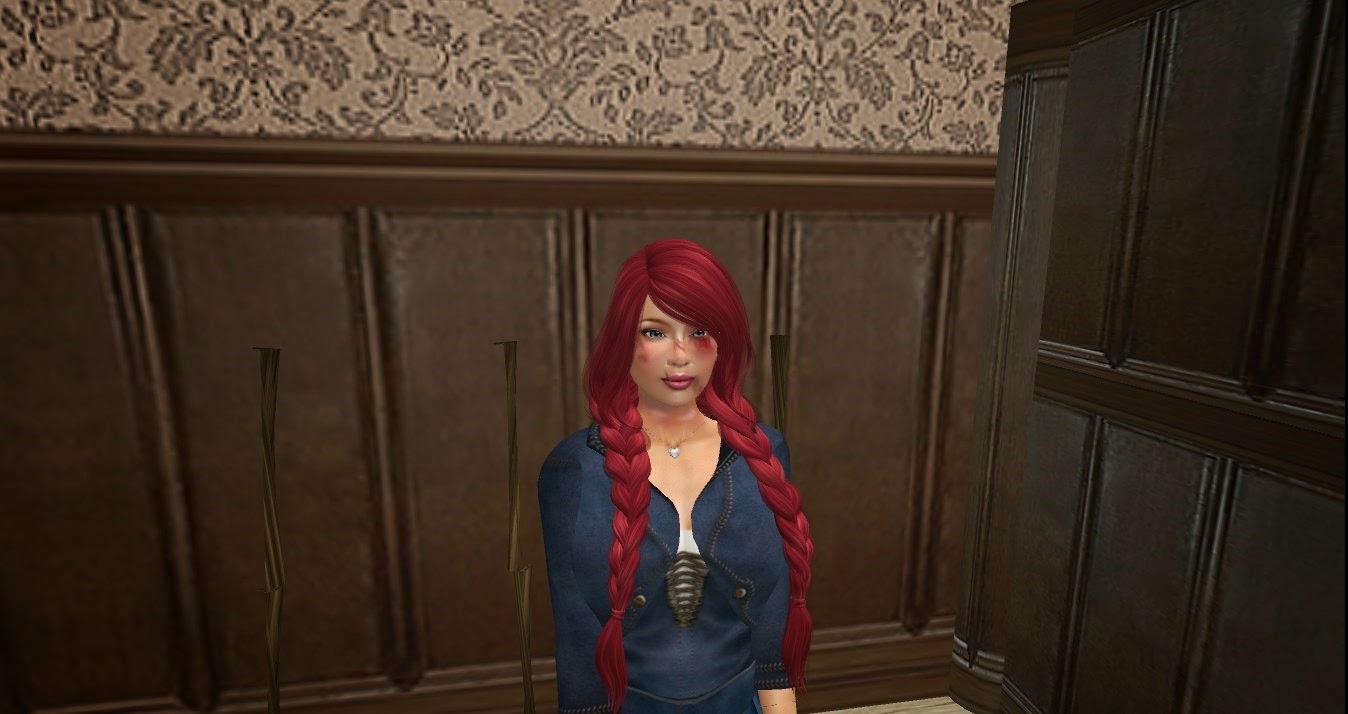 The Courthouse was packed when I arrived (late from being lost in the wrong town on the way. ) to witness the hanging trial of Angi Spires. Before the trial started it was necessary to remind all to remove their weapons since one idiot had not parked it at the door. The jury was seated already when I arrived.  Angi was seated at the table looking terrible. Her eye was healing from being blackened, rope burns around her neck,  and her face was scratched. She was eating a taco handed to her by a compassionate member of the  audience. Her eyes looked confused. Angi is on trial for shooting Garth 'Dead Eye' Mcleary (gamloth), a self proclaimed territory bad guy.  and this may lead to a hanging.  There is more to the story it seems and I am hoping it will come out in the testimony.

You must realize that in the late 1800‘s the court became more like a theater with many allowances , eating , drinking , smoking allowed by the members of the audience.  So in this wonderful roleplay sim many of them also made comments to each other and expressed their thoughts in role play mode. This added to the theater of the moment.

The decorum of the trial  however was well controlled despite the asides  and the lawyers well prepared, both prosecution and defense. Jimmi Ruble, the Judge, instructed the jury on conduct , gave us a little history of the court conduct of that era and the trial began.

There was not much of an opening statement and the first witness was called The Marshall, Kristoff Jamison , was sworn in, sat and the prosecutor, Nimbrel Sassoon began to question him. Marshall Kris witnessed the whole event. It seems that he was in the process of arresting the man who had wronged her when Angi took out a carrot and tried to shoot him. Well, since that did not work she grabbed a gun from a bystander and  finished the job. 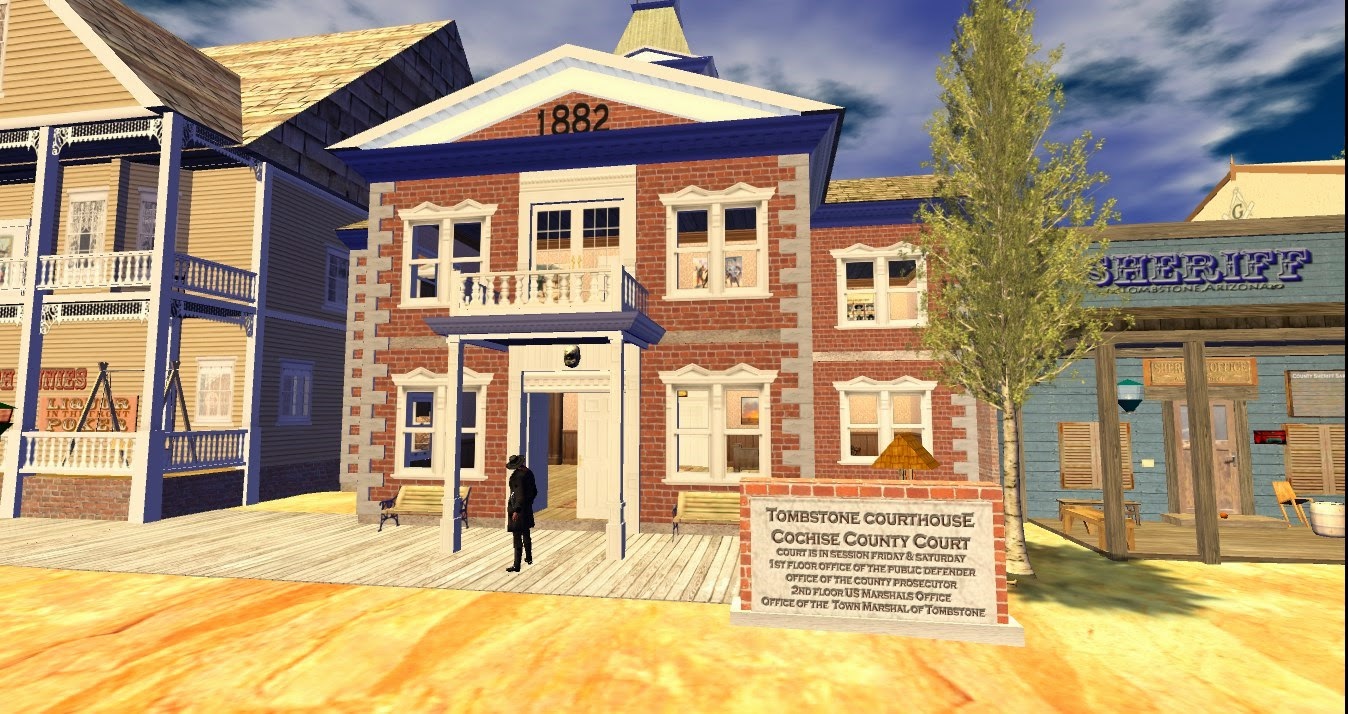 The next witness called , Julielynn Slade staggered to the chair leaving an alcoholic haze  behind her. However, her testimony was consistent with the Marshals.  A statement was read and submitted to the court that clearly describes what happened the day of the incident read by the prosecutor,  Nimbrel Sassoon
Territory of Arizona
Dated: 7/17/1899
Name of Witness: Ben Stolen

DESCRIPTION OF CRIME: I was enjoying the fresh air on Allen street ,talking to a few friends, Miss Angi being among the crowed, she was cleanly not in her right mind, when along come Mister Garth...In a split second Miss Angi just seemed to start shouting accusing Mister Garth of being half dead, most folks were to assume at that point that Mister Garth were the one that had near beating Miss Angi half to death , I ain't never seen Mister Garth to be that sort of man and still find it hard to believe if it was to be truth, anyways, before I knew it, Miss Angi had pulled my colt from my holster and blasted the poor SOB in the knee...she then dropped my colt in the middle of dusty ol Allen street..I was more mad about that seeing how I spent the morning cleaning the dang thing, she did apologies to me for it a bit later..but none the less..I couldn't react fast enough to have prevented any of it from happening....” 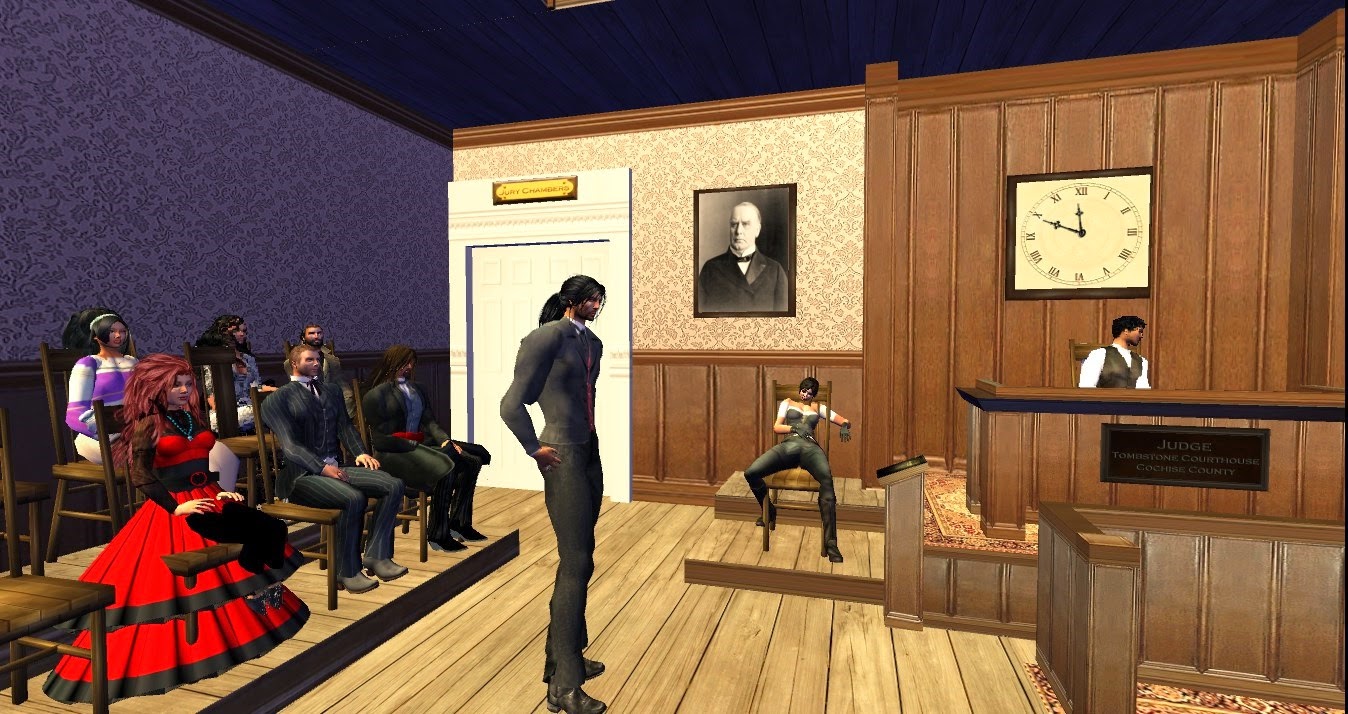 The Doctor, Jessicajewells. took the stand next  to recount her treatment of Angi’s injuries when she was returned after being kidnapped and beaten leading to a complete mental breakdown. Next Paisley Nelson was sworn in and confirmed that her behaviour before the shooting was disoriented. After she left the stand a young girl , Nora ... was called by the defending lawyer, and testified to Angi’s behaviour since she returned from her kidnapping had been completely opposite to her organized previous self. Angi is the Matron of the orphanage and Nora is a helper there. Many of her charges were in the seats witnessing the trial looking sorrowful and frightened when they were not throwing candy at each other. Angi was called to the stand finally and after telling of her tribulation at the hands of Garth and her action in the street, in her confused way threw herself on the mercy of the court by accepting her actions as completely wrong.

The trial progressed to its closing statements. The Judge instructed the jury and they retired to the jury room to reach a verdict . There was much discussion in the room with sudden shouts and  hollering amidst many comments from the people waiting in the courtroom while they were out.

Finally they emerged to the waiting crowd with a verdict of not guilty! The court erupted in applause and relief. Angi was free! The doctor was ordered to treat her and help her recover from all the events . Happy to be released from this long trial( when I arrived the judge said most trials last about an hour but it was now over 2 hours. I was about to leave when shots were heard from outside the court. A man marched in and began to berate the Judge for corruption . Time to leave before getting involved in a new episode. Tomorrow the trial of Angi’s abuser will begin . She left with Nora and the children to go cook chicken.

So ends the trial of Angi Spires. I will be visiting Tombstone again soon to see what is going on. If you are interested in learning more about Tombstone which still exists in Arizona today ,  and its adjacent sims and roleplay you can visit the greeting area. http://maps.secondlife.com/secondlife/Broken%20Rose/177/174/704


Gemma Cleanslate
Posted by Bixyl Shuftan at 4:47 AM