Avina en' Cael (Saria Resident) is someone many in Second Life would find unusual: a female wrestler. A performer at HAWX (Hellcats Angels Wresting X-treme) and the WPWF (Women's Pro Wrestling Federation), she's gone through her share of body-slams. Recently she's been involved with an upcoming WPWF event to help raise funds for Parkinson's research. Charlotte Williams recently interviewed her about the happening. 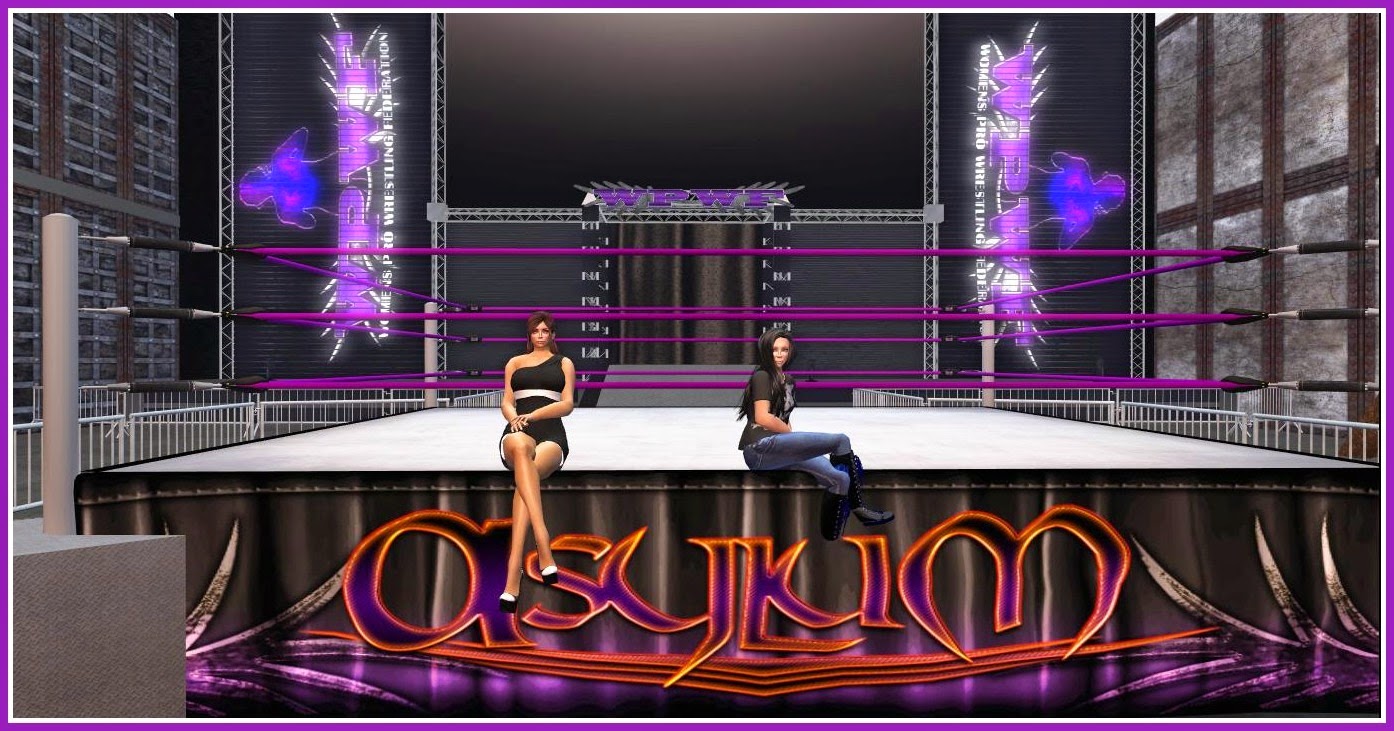 Charlotte Williams: "Thanks for inviting me here today Avina"

Avina en' Cael: "Thanks for coming! Welcome to the Asylum." We settle down at the WPWF Commentary Table, with its birds-eye view of the WPWF Ring and Stage Area."

Charlotte smiles, "The Asylum'? So what usually happens here at 'The Asylum?"

Charlotte nods,  "Ok, and tell our readers a little about what WPWF is, what does it stand for?"

Avina en' Cael: "Womens Pro Wrestling Federation, it's the all women wrestling federation run by Tyress Serevi, or  'The Nova' Tyress Serevi as she was known in wrestling, its a once a week hour-ish show, and she was kind enough to lend me the use of her arena for the big charity event."

Charlotte Williams: "Ok, sounds interesting for sure. Can you tell us a little about how wrestling works here in SL?"

Avina en' Cael: "There's two types. There's "Poseball" which is where I got started, before it turned into it's current state, where you basically hop on a poseball, type a huge paragraph describing what you're going to do to the person, and click a menu, and thats how you run the entire match. Or there's HUD wrestling, the actual wrestling that requires a lot of focus and knowledge of everything going on around you in the ring. Which is where you put on a hud, and you move freely in the ring, no poseballs, and you type out everything that you want to do, and it's up to you to line it all up and make it look good.So say I wanted to powerbomb you...I check my gestures (If I don't know them exactly), find the powerbomb trigger, and type it (./powerbomb)." 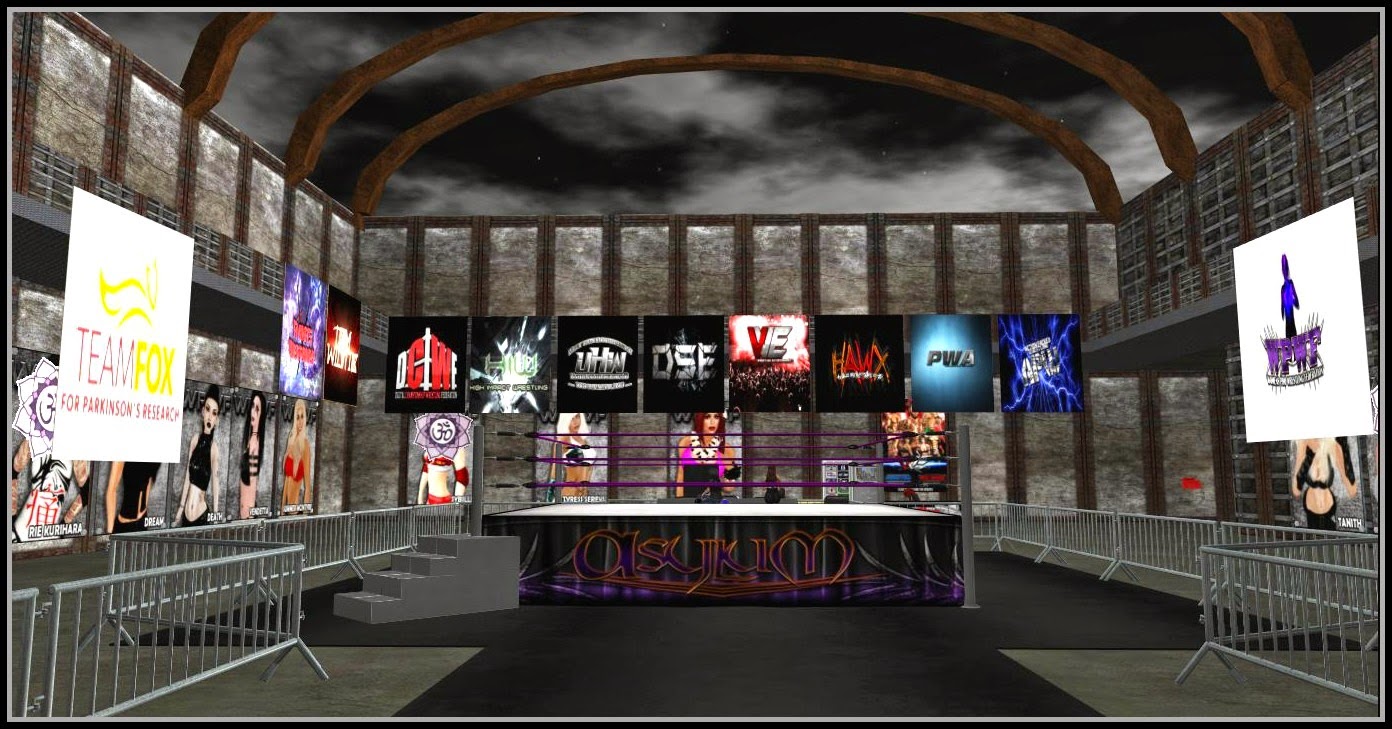 Charlotte smiles, "Please don't powerbomb me Avina! Ok, I see, and its like a dance of sorts, albeit one which involves kicks and punches?"

Avina en' Cael: "Kicks, punches, slamming heads on corners, throwing your opponent to the concrete...I've seen one person, Ayane, actually use one of our (the entire wrestling community) fans and do a move off his head...craziest thing I've ever seen."

Charlotte laughs, "Wow, sounds crazy indeed, unlike something many people would have seen in SL!"

Avina en' Cael: "Numbers Rossini, who helped build the NexGen system we use, said it best, 'What we do breaks SL, it's not meant to do it, but we make it do it'."

Charlotte Williams: "Would that be an original quote?"

Avina en' Cael: "Pretty close, I cant remember his exact wording, but it was pretty much identical."

Charlotte smiles, "So as you mentioned earlier, you started out on a poseball with your wrestling career, what made you decide to start wrestling in SL? And as a second part to that question, what keeps you coming back to SL to do it?"

Avina en' Cael: "Heh...the poseball thing was literally I needed the money. I don't remember exactly what for, but Ace Nightfire who helped with the Charity event was like 'Hey you know poseball wrestling makes a lot of money sometimes', So I asked Shania Adder if she would train me in it, and with my vast roleplay background, and my father getting me into Professional Wrestling (Note, Professional Wrestling, NOT Sports Entertainment as it is now), it was just natural to me. Then he (Ace) was like 'You should try this HUD system we have, called Nexgen', and I met Stacy Grace at the same time, and they got me started on the HUD stuff, and I found I liked it a lot more than poseball which was turning more into adult oriented, and I outright refused to do that....I'm there to entertain, not get naked."

Avina en'Cael : "As for coming back, I might not be as quick as everyone due to my crappy computer, but I still enjoy it...and being a heel, a bad guy, I love finding new ways to make the fans hate me even more week after week," Avina grins.

Charlotte Williams: "Sounds like an interesting hobby to say the least!"

Avina en'Cael : "So we've got the background story on wrestling in SL and your history in SL, and as you mentioned, we are here to talk about your charity event that is coming up this weekend. Can you tell our readers what the event is and how it came about?"

Avina takes a deep breath, "Well as I mentioned, when I was in the poseball thing, Ace Nightfire was always the DJ. Then we worked together in DCWF, and he always talked to me about a dream he had combining the two, music with SL wrestling. Well, about a year passed, we parted ways, I left DCWF and fed hopped a bit, and we started talking again, and he brought the idea up once more only this time he was trying to go with it. I had run a music venue for awhile, so I had a lot of live music artist contacts, so I was like 'You do the wrestling, I'll do the music, lets make it happen'. Unfortunatetly, our first attempt flopped, we didnt get out of planning stages, then the second, this time, it just sort of all came together finally."

"The event is for Team Fox, who are run by Barbie Alchemy, who runs the SL portion of Michael J Fox Parkinson's Research Society. They, unlike other big name charities, actually give 100% of the proceeds directly to research. Most will pay sim tier first, then CEO's, then staff, bills, etc, THEN about 30% goes to actual research. The MJF charity pays no tier, pays nothing but goes right to research, and I'll give your readers a video to watch which is very inspiring that we'll show Saturday as well."


Charlotte smiles, "Thank you, much appreciated. As we are sitting in a wrestling arena, obviously the event involves wrestling, but I believe it will also incorporate some musical elements. If our readers wish to come along to the event, what can they expect to see?"

Avina en'Cael : "Well, we start at 10 AM sharp up here in the Asylum with a match a long time in the making, Whiskers Savage vs La Gata Loca, its something you just have to see to understand. We'll end it with a never before seen six woman tag team elimination match with a match type I created myself, called the Dragons Dance. After the wrestling wraps at 1 PM SLT we're going to have two singers down below at the main stage. Diana Pearl will be opening up, then we'll have Celia Cruz, who is a live tribute artist to the late real life Celia Cruz.

Charlotte nods, "So its a wrestling show followed by a concert with live singers?" 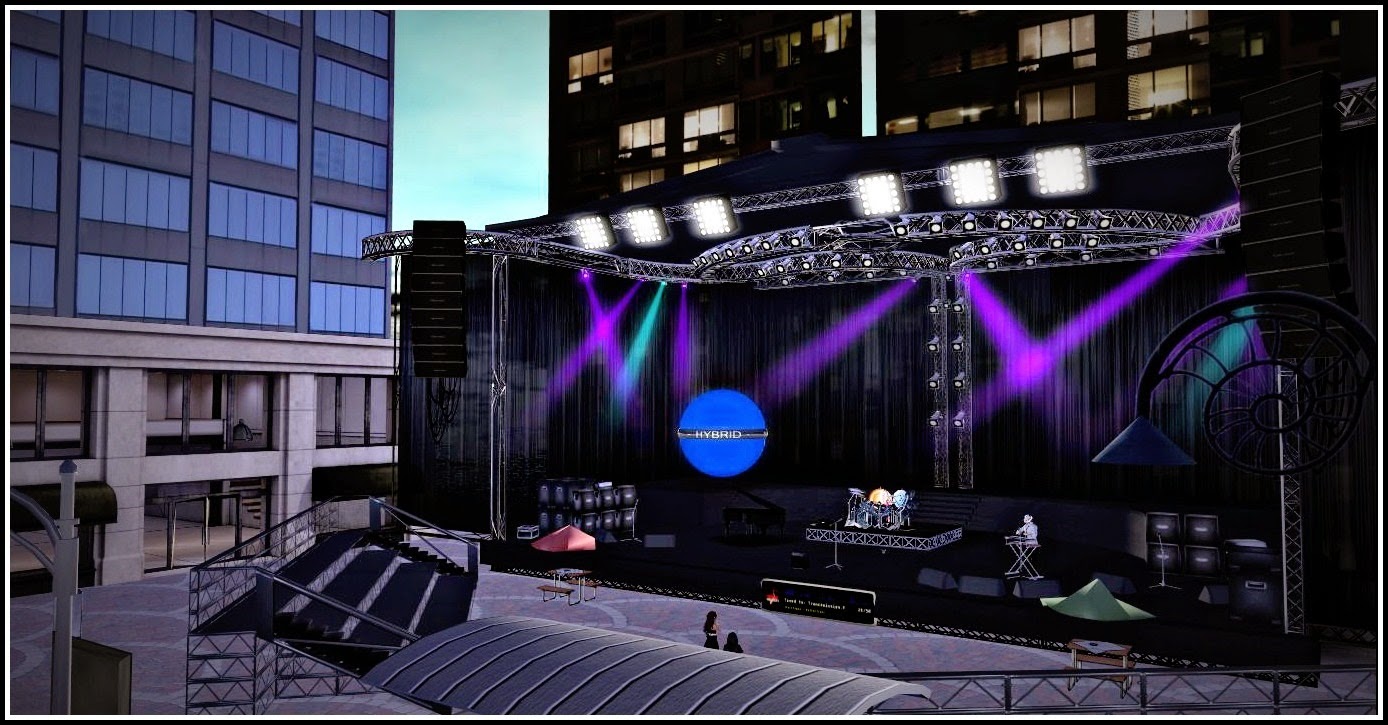 Avina en'Cael : "Yep. That was the original idea, wrestling and music, and I could be wrong, but I don't believe a charity event has ever featured both in one day. I could be wrong though, I know your We Care is a huge wrestling event too."

Charlotte smiles, "Thank you, we had DJs for We Care last year, but no live singers. As its a charity event, how can people donate or offer their support?"

Avina en'Cael : "They can contact me if they wish to donate an item, and it will be raffled off (If anyone has a raffle system to donate that would be wonderful), or somehow given away for the event. They will get a poster like the ones around the arena and free advertising throughout the show in exchange. I'll personally be donating my entire Dragon Blade set, which go for about 500L$ in world each, all 10 of them to it, Absolute Animations is giving away any move from their vendors."

Charlotte Williams: "And there will be donation kiosks as well?"

Avina en'Cael : "There will be one just to your right, and a couple down below as well. You can also visit their sim, the SL Newser just ran a beautiful article on it, and donate there as well. I really encourage people to read the article the Newser did and visit their sim, it's so beautiful, they have horseback riding, art displays, all kinds of stuff."
Charlotte nods, "That sounds wonderful. You definitely have plenty of ways to donate and support this most worthy of charities. Thank you very much for your time today Avina. Before I go, is there anything else you'd like to add to inform our readers about your event this weekend?

Avina en'Cael : "All tier for the sim is donated by a third party, as well as all expenses, so all donations go right to the charity research. If you're into SL wrestling...we're going to have some amazing matches...I mean Lyra Phoenix vs Tara Titan...that's going to be a hard hitting match, the Dragons Dance is going to be crazy, the music is going to be great...so clear your day out and come enjoy the show. Just be sure to de-script as much as you can, that's VERY important to reduce the lag.

Here are the all important details, so you don't miss a second of the action...

This Saturday 16th August, The Wrestling Charity Event for Team Fox representing Michael J Fox Parkinson's Foundation Fundraiser begins at 10am SLT, at 1pm SLT Diana Pearl and Celia Cruz take to the Synful Desirez Stage for a special live event. If you still want more wrestling, the weekly WPWF show begins from 6pm SLT. The SLURL for all these events is: http://maps.secondlife.com/secondlife/Careers/209/243/224. If you have any questions about the event, feel free to contact Avina (saria Resident in SL) for further information. Enjoy the event and donate BIG!
Charlotte Williams
Posted by Bixyl Shuftan at 6:00 AM