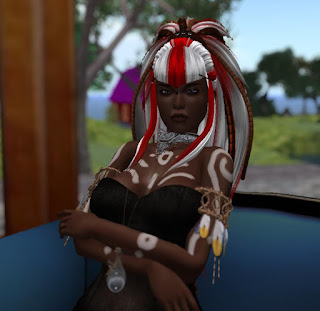 Normally I am your fashionista expert, although now I am feeling the need to write about something near and dear to my heart. As we all know, Secondlife is full of amazing sims and Roleplay opportunities. I personally love Roleplay, especially that of the Gorean variety.

Now, we all have had the experience I am sure of as soon as you land on a sim, someone harping in your IMs about this rule or that rule and that is an immediate turnoff. However, what is more of a turnoff is if it is something minor that really doesn't matter in the instance.

Now, we all know that it is frowned upon to teleport into active roleplay; but we also know that we all do it and we all teleport people in for whatever reason suits us at the time. A simple (incoming) or (im tping someone in) in OOC brackets usually suffice.

Instead of just going with it, and mind you; I posted a proper entrance to explain my sudden appearance:
Syndra steps out of the shadows and looks to Saxon. "I could have killed you and you would not have even seen me." She glances to the girl before settling into a seat. "You rang Saxon?"

The girl involved immediately began to jump into my ims in a most unsavory fashion. For those of you who don't know, this is an immediate turn off and honestly looks bad on you as a person and the sim as a whole.

If a serious rule is broken, that is one thing. And even then it should be a mod or the sim owner in another player's private messages. Not every Tom, Dick and Harry with a complaint about a situation that is acceptable to ninety nine percent of players. Come on now....really? You have nothing better to do than to harp on for twenty minutes about such a small thing as me being telported into a roleplay by the main character because he wanted me there?

And after I asked her if it was truly that big of a deal she rolled her eyes at me. Well...all I have to say is, with players like that no wonder some sims die.

The moral of all of this is, can we not all just play together and get along. Leave the little things alone and stop trying to be the center of attention all of the time. Secondlife is a wonderful place. Let's play, and the more the merrier.

-Love Syn
Posted by Bixyl Shuftan at 6:00 AM