SL12B Inteview: Danger and Troy Linden with Saffia and Draxtor

Full Disclosure – I Wasn’t There

I watched a video of this interview, because I was working in First Life when it took place in the Dreamitarium auditorium. The auditorium, one of my favorite builds at the birthday, was built by ADudeNamed Anthony. A tip of the hat to this Bay City regular on a creation that is form and function excellence. The quiet colors of the interior stage provide the perfect backdrop for the interviews being conducted.

Whom is Being Interviewed; Whom is Interviewing? 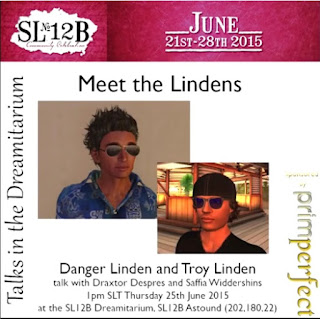 This interview was part of the Meet the Lindens series for SL12B. Saffia Widdershins was to be conducting these talks, but if you watch this video, or were there, and didn’t know this, you would most likely not identify her as the lead in the event.

The video I watched showed many technical difficulties, that the team there, headed by Uccie Poultry worked diligently to correct, but to this day it is difficult to amass large numbers of residents.

The oversized Draxtor Depres was on the stage from the start, and I was surprised to see him. I adore Drax, subscribe to his podcast, and watch all of his videos. However, that didn’t stop me from being unhappy with his performance here. If he was supposed to be there, then I am sorry, but I was not sure, and it was never stated during the video I watched. Is he a Linden now, but I don’t know it?

On to the Main Event 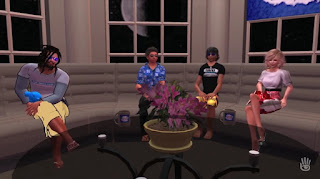 Danger Linden is the Senior Director of Product – Virtual Worlds and Troy Linden is a Senior Producer. Both worked many years in the game and tech industries, and they began working at Linden Lab within a few months of each other in 2007. Both have prior experience with EA and the Sims.

At present, neither of them are working on Project Sansar, but Danger was part of the original team.

Draxtor tended to ask very important questions, but instead of asking them directly he would give a long treatise on his own opinions and end with his question. He asked Danger and Troy how they juggled work on SL2.0 and SL. He asked it after he spoke for a while about how he manages this task, and went on and on.
I am not sure why his behavior irritated me so much, but I am sure it had something to do with the fact that it was Saffia’s interview, and I know her to be too much of a lady to get into a sparring match with Draxtor.

Danger was a reasoned responder who was able to speak from his experience and avoided speaking for others. He explained that he could manage many tasks because he is now solely working on SL. He gave kudos to Oz, who has put together a dedicated and experienced team to focus on SL.

Draxtor then asked about the onboarding process for new LL employees, and found that there was a Boot Camp. This is a specific program run by Char Linden. Danger stated that LL’s onboarding is the best he has seen in a new corporation.

There were many questions from the audience: “How many women work in SL?” Danger handled it deftly: “We have more than two genders here; it’s San Francisco, after all.” Draxtor added that the staff at LL seemed the most diverse he had ever encountered.

Finally, Saffia got a question in, and asked Troy about the experience tools in SL. Troy then lost his voice, and we waited for him to come back while Saffia listened to him in Skype. While waiting for Troy Saffia still spoke with Troy, but we could only hear her assenting with him, and nothing he said. The experience tools are still in beta, but users can try them out. Individuals like Loki Elliot, and groups such as MadPea have been using them to their advantage. Draxtor asked if it was OK to make them so difficult, and Danger gave the correct answer, which is that not everyone in a world wants to use these tools, the experience is different for everyone, and not everyone wants to create and build.

When asked about what were the most enjoyable projects Danger spoke about how he loves the breaking down of silos so that SL is one place from the Welcome to the different sims. He looks at it as a system rather than disparate parts.

Of course this brought on a discussion about how much first life do people want in their second life, and how Facebook makes that difficult. Identity is a big topic in SL, and Saffia shared how she has solved this problem by creating a Saffia page in Facebook. This is not always possible.

There was an audience question about My.Second.Life, and Danger revealed that it was not going to be developed further.

Another question was about Oculus and Sansar. Danger said SL can barely support
It, because it is twelve year old legacy code, but Sansar is being built with the new tools in mind. 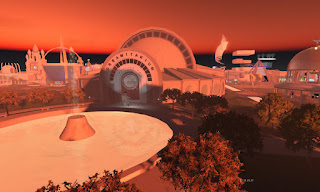 This is what everyone wants to hear about, and I think that some of what was revealed on other blogs has been inaccurate.

Danger and Drax spoke about the burgeoning virtual reality awareness, and that it is a hot space right now. Danger wants to do it right. Here are some of the things that were said:

Terrain will be Voxel-based. There will be a system to allow non-registered guests to create without paying, lowering the entry bar. Many people (not the Lindens) talked about Cloud Party and how you could get land once you demonstrated that you could build). I did not really hear a Linden say there would be free land, but that has been touted about the grid since this interview.

Danger did state that SL will still be viable in five years, and will not die when Sansar opens its doors. He added that a long life is ahead for SL, and many will use both.

Saffia asked audience questions.  How will animations work in Sansar? The animation system in Sansar will be a full professional system with avatars and objects, Havok plus.

The first invitees will be Maya users, although all tools will eventually work in Sansar. It will be invitation-only.

Draxtor: To what extent will it be possible to build in world?
Danger: that is the goal, to build collaboratively and in world.
Saffia joked about everyone getting two acres and a cow, and Marianne McCann quipped: “1024 and a hippo. “

A member of the audience asked if hypergridding is being considered, and Danger said not at this time.
Saffia and others wanted to know if there will be last names?  Danger said he couldn’t answer now. The main login will be your email, but you will be able to have many accounts under that address, and you should be able to share inventories amongst the accounts. There will be text and voice chat, but probably not a build for Linux.

Will Sansar be anonymous? The current vision for this is to have a hierarchy of permissions in Sansar, that relate to how much information you share with Linden Lab. The more they know you as a person, the more abilities you will have. Danger said this is to combat griefing. Trust will build user rights.

To close Danger revealed that the first invitees were being spoken to at this time. I guess all will be answered once Project Sansar opens its doors to alpha.

So, thanks to the Lindens for this improved transparency under Ebbe’s leadership, and thanks to Saffia for remaining level-headed, and thanks even to Draxtor Depres, who asked the right questions, but should have done it on his show.