Earlier in Steelhead's history, events there an in other Steam Age sims were covered by the Steampunk Herald (No relation to the Second Life Herald), run by Franq Blackheart. In this interview in 2011, Franq interviewed the mayor and owner, Total Lunar Eclipse, usually known simply as Lunar. 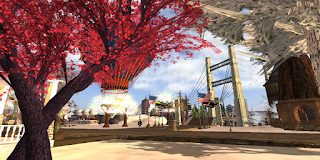 You're asking someone who is extremely biased. *laughs*

Steelhead for its relatively small size is a close community. Each unique species is welcome and has a place here from mad scientists to tinies to fantasy oriented persons such as myself. It has always made me feel comfortable to live here even when I wasn't managing.

Also it has such difference in themes from one sim to another that no two places are alike. It is also ever changing, we encourage change and growth. (except St Helens, the city center is going to be downgraded into a smaller rustic town) Port Harbor pier is undergoing changes to add a more pirate theme to it. I learn to build better, I rebuild things, Tensai learns to script and sculpt better and she rebuilds everything.

Also it is stable. Steelhead is over four years old, and before it became Steelhead it was another community altogether. So this city, the concept and idea are over five years. I am also not the only person to run the city, my real life wife of 12 (going on 13) years is my SL partner in crime. We have no intention of stepping down and it is such a strong community that if the grid goes down... Steelhead will simply move to another grid.


2.  How will Shanghai's change of rating to Adult affect the community; sales, roleplaying, overall cohesion?

First and foremost we changed the rating of Shanghai to adult to maintain Shanghai as it was before the TOS changes came about. We did not want to alter Shanghai at all. It is notoriously known as a darker place with opium dens hiding underground and shady back alleys now several factions of gangs have moved into the city.

Before we came to the decision to change Shanghai to adult we consulted every single person who had land and rented in Shanghai for their opinion. Several stores in Shanghai would have to move due to the TOS (they openly advertised the use of drugs in the dens) and several stores outside of Shanghai had to move into Shanghai due to the change as well. We weighed the possibility of revenue for businesses and we were prepared to move folks out of Shanghai into Port Harbor or another sim of their choice if the change of rating was not favorable for them. No one moved out.

It also gave vendors ideas for changes. Such as adding a seedy tattoo parlor and skin store and be a bit more open with what they sell. (Tastefully done of course) We are the first Oriental Steampunk themed city and perhaps the only Adult Steampunk sim in the Steamlands, there has been a build in interest as far as that particular change of rating that is enticing to those that wish to be more liberal with what they sell. When we introduce Shangri-La it too will be adult rated.

As far as roleplay, Shanghai is a dangerous place. Being Adult rated gives it a more darker appeal to encourage personal RP. As far as overall cohesion Shanghai has always been the darker of its sister cities, it was a city overmined, overtaxed and one doesn't walk there alone.

One thing I want to address to everyone is the adult theme does not change our community and city standards. There will be no nudity on the streets, tasteful adult wares are to be behind closed doors. The change was specifically to maintain the city as it was. The rest of the estate is moderate, the community does not allow underage users... not avatars. The scamps that live in Shanghai still remain there, their users are responsible adults, they know which places they can and cannot go and are safe because they are protected by the various mobs and pink mecca.

*gets off soap box*

And the city is lovely... dangerously lovely.


3.  What recent and upcoming events best reflect the Steelhead spirit?

The new years dance was a fun example of who we are. Tensai created one of her artistic sim wide dance floor. The community celebrated together, destroyed giant clocks, it rained fish and Denny was in his skivvies.

As far as the future? We'll be celebrating Chinese New Years, which as in previous years gets very interesting.

With Thanks and Regards,
F. Blackheart Esq.
Posted by Bixyl Shuftan at 6:00 AM