Titled Friends in "Fly" Places, this interview was done by Franq Blackheart of the Steampunk Herald in April 2011, shortly after his interview with TotalLunar Eclipse. 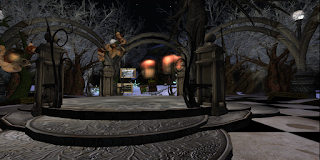 When I first had the pleasure of meeting graceful designer in Second Life, Tensai Hilra, she was engaging in a spot of gardening.  That is to say, she was planting strandy bushels of head-high grass in row after row along the elegant streets of fantasy steampunk sim, Steelhead.

It was the eve of April 1st, and she aimed to surprise her husband TotalLunar Eclipse - possibly into fits of apoplexy, more likely into row after row of exclamation marks.  For Tensai and TotalLunar are the uncrowned King and Queen of Steelhead, its much-loved benevolent rulers and caretakers, and the Elven/feline embodiment of its humorous, strong, steamy spirit.

After offering to build Tensai a lawn mower of great immensity ("Spring showers," she quipped), we proceeded to have an out-of-character conversation about the Real Life solidarity of Steelhead's Second Life community.

I asked about TotalLunar's role as leader of the community.

"He goes by whatever, technically he prefers Owner.  It's all pomp and formality anyhow.  We love the place so much we bought it and expanded it! We focus on the community rather than the profit margin.  I'd rather log in to meet friends than customers.  This community is dear to me.  It literally has saved my life!"

Second Life seems to be very powerful in that regard.  Was it the community that helped you back to health?

"A lot of good people, if you know where to look," she winks.  "I was a troubling situation... I had just lost my job.. no income unexpectedly, and no employment for 6 months...'''

Tensai ran out of her medication, needed to combat physical pain and other conditions.  Her withdrawal was painful.
"I was bedridden.  My husband didn't work at the time.  No food in the house; it was grim...
"Then, all of a sudden.. Nabila, one of our citizens, shows up at my house... food in hand!... and says that, spontaneously, Steelhead City and all the Steamlands got together to help!
"She brought food, and even Paypal donations that helped keep the power on, buy more food, and pay rent!
"All of that came from the community!

Tensai was incredibly moved by the compassion and caring shown by the Steelhead and SL Steampunk communities.
"I wrote this blog entry shortly thereafter
( http://tensaihilra.wordpress.com/2009/11/27/thankyou/ )
"I was unable to speak!  I cried for a day in joy... I'm misty eyed, now, just thinking about it.
"I then knew I had done right sticking by this community.  The steamlands as a whole as well.

An illustration, perhaps, of exactly why people come to Steelhead. And stay.

"Absolutely.
"The meds were for chronic pain... something I deal with daily now as I can't, won't, go back on the meds.
"In Real Life, I am in and out of a wheelchair as it ebbs and flows.  But as I always say... doesn't matter if I can't walk in Real Life... in here, I can fly!"

And with that, I reluctantly left her to tending her wild garden.  When you next find yourself in Steelhead, make sure you run into Tensai.  She has a story to tell.

Franq Blackheart
Posted by Bixyl Shuftan at 6:00 AM