A Cry For Help From Venezuela

Computers and the Internet can bring people together in many ways, online virtual worlds even more so as they give the appearance of being together. This can often mean people learn a little more about each other's societies. But it can also mean an up close and personal view of a big problem overseas that one might be only casually aware of through the newspaper or TV news, if it makes it to the newspaper or TV news at all.

I was exploring a virtual landscape in Second Life a couple nights ago when I got a notecard that had been sent by someone on my contact list: Alejandra Jumanya, or Miss W as she is also known. I had interviewed her last year, as both the owner of a virtual goods store selling outfits for Second Life avatars, and as someone inside an increasingly impoverished and oppressed country in which the money she made online was becoming increasingly important in getting by as the economy in her country crumbled. She had hoped she and her family would make it to the United States in the future.

A year later, she has become more concerned with the short-term survival of her and her daughter.

The notecard she had passed to me, and everyone else on her contact list, read, "Hello my dears, xxxx and I are getting some food at Walmart and shipping them over to Venezuela.  If you wanted to help us, you can do so by giving us a gift card to Walmart or Paypal (xxxxxxxxxxxxxx@hotmail.com).  I feel embarrassed  to ask for donations, but you know the situation here and how difficult it is to get food, also minimum wages here are like $15 a month, so it gets tough.  If you feel inclined to help us, we will be very very grateful!" 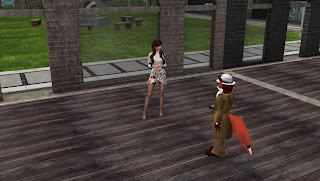 Wanting to know more, I instant-messaged her. She was surprised to hear from me and at first wondered if I had taken offense at her request. I told her no and wanted to talk. We met at a location where she had a few of her goods for sale. She continued with her story, "I started to write another notecard a few weeks ago, but I never had the ... bravery to send it. I will copy some parts of the notecard ... which I never finished or sent because I was embarrassed, and my friend said it would be better to do an event. But she is busy and real-life gets in the way.

"I'm not sure if you know, but things here in Venezuela has gotten harder for us (for xxxx and I), the government is imposing us a food redistribution system, that requires us to acquire food from Socialist Party members, it's a way for the government to use food to coerce citizens into supporting it... not only you don't get in the food list if you are not pro-government, but also, those who get the bag, it's a (paid) bag of 1 kg or rice, milk, sugar and pasta every few weeks or months.

"I don't get a (paid) food bag... my neighborhood doesn't anyways, so we are currently forced to buy food through a rations system that forces us to stand on supermarket lines up to twelve hours long (although it's illegal to do food lines at night, so if the police comes, we have to run to our cars and come back to do the line). Often, after 10 or 12 hours through the lines, you find out that the supermarket in question has run out of basic goods like rice, vegetable oil, and milk. 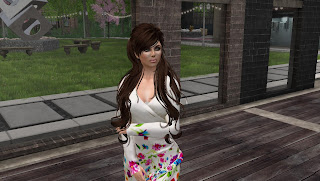 "Controlling food supplies has become increasingly important to or government as riots become more and more common. Last week, in the heart of Caracas, hungry patrons of a local market rioted after seeing a shipment of rice enter the market and almost immediately being told the food had been redistributed to the Bolivarian National Guard (GNB), the troops typically responsible for attacking peaceful anti-government protests. Chanting 'we want food,' a crowd of hundreds began to march towards the presidential palace, halted only by the GNB using tear gas and violent Chavista gangs known as 'colectivos,' attacking both protesters and journalists."

"I've heard some news reports," I told her, "though this is something new." "Not new for us," Alejandra told me, "it's just been shushed by the media. But we have been in a very bad situation with food and medicine. ... Just today, a friend of mine left her home to buy a present for her 12 month old baby. When she came back, someone had broken into her house, stole her stash of diapers, all her baby's clothes, left NOTHING. stole her clothes too, and the food she had in her fridge and pantry, you know, half a kilo of rice, some pasta, 250grms of coffee, things like that. That's how bad things are. ... You see people losing weight, faces gaunt, people who have college degrees, like doctors, engineers, accountants, making $15 a month and not being able to eat twice a day."

She had shared a few real-life pictures of her and her daughter, but after some thought she felt it might not be a good idea for them to be used, "maybe we should use (only) Second Life pictures. ... what if someone who knows me sees it, and they mug me or kidnap me for money? It might not be so safe to put my face there." It was quickly agreed to use only her Second Life identity and pictures.

I asked her where she had first gotten the idea of making her appeal. She answered, "Well, I had my group for about 7 or 8 years now, and I have thousands of loyal customers, people who know who I am, they know my store has 3 brand new group gifts per week, and they KNOW who I am.. I have always been open about my real-life and my daughter, and the situation we are facing.  We are like a big family in my store group, and I thought some of the girls could or would want to help us."

I asked about others getting help outside the country. She answered, "Of course. Maybe about 80% of my friends have left the country, they are doctors or accountants here, and go to America or Europe to clean houses, work construction, do any job they can find, work at hotels cleanings, so they can send money back to their relatives." While it does bring home needed cash, unfortunately, "it tears families apart. I have a friend who left her deaf/mute daughter and granddaughter to go work in America taking care of an elderly person, so she can send money back here. Another friend who left her two kids with her mom and left to Dominican Republic, so her kids get to have food, but no mother."

"The Dominican Republic?" I asked, "Weren't they poor compared to your country a generation or two ago?" Alejandra answered, "People came to Venezuela from all over the world, because we have a great weather, the women are GORGEOUS, people are warm, you have in such a small country a desert, snow, the most amazing beaches, the plains of Venezuela, we are sitting on top of the biggest reserve oil of the world,  there is no other country with more oil.  Venezuela used to be a great place to live in, we often would see Europeans, Latin Americans or Americans vacationing here. Now the sad truth is that we are treated as 'the migrants' now where we go. Lately I have seen protests in Panama, asking the government to deport illegal Venezuelans, same in Dominican Republic and other countries. We are known as 'the migrants,' people are fleeing the country, even by boat." 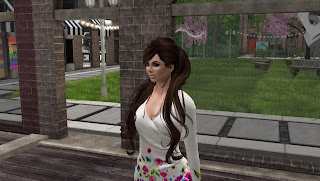 I then asked, "Is there any kind of sign of this collapse being halted?" She answered, "You live here in a state of anxiety, you live with uneasiness, often people will say 'NOW THIS IS IT, THIS WILL BE IT!' But nothing ever happens,  there will be no revocatory against the President (elections to vote if we want the president or not).  We have lost the sense to be shocked.  For instance, a few weeks ago some malandros (thugs) got into a bus with a mobile credit card machine and they made everyone on the bus empty their bank accounts.  So, people say 'OK THIS IS IT! NOW IT'S REALLY THE LAST STRAW!' But nothing really happens. When things get really bad, the government distributes some food or do a concert and bring a couple of singers and some beers, and people forget about war, and they go back to their jobs the next day."

How secure was her connection to the outside world, Second Life and the Internet? Alejandra answered it was already occasionally sporadic due to the occasional lack of electric power, "we go without Internet sometimes a couple of days. Sometimes we have Internet but no electricity, water and gas fail too, we will be having water only twice a week, on Wednesday and Sunday night. It's all chaotic here."

Although her email was in the notecard, she asked that it not be used in the article as she could get in serious trouble if the Venezuelan government traced them to her. Anyone interested in helping her could contact her inworld for the information. How could others help her out? "Walmart gift cards, or Amazon. When you buy a gift card, it gives you the gift card number and a four number code. With those two details I can add it to my account and use it. It won't work for PayPal,  but it would would work for contacting me."

As many problems as she had, some which she wanted off the record, Alejandra's last message was one of well-wishes, "I want to wish you and all your readers a merry Christmas and may 2017 be a wonderful year for you and all you love."

And so we parted ways. A number of my Second Life and Facebook friends often complain about drama, or about sports. Several weeks after the US Presidential election, there are still no shortage of complaints from some about the results. It all seems so pale when talking to someone concerned about her daughter having enough to eat.

Alejandra recommended  A number of New York Times articles about her country's situation, including one about the currency crisis sparked by the government's strange policies, and of it's people trying to find work outside the country to bring home a little cash.

Alejandra's store is located at Pergola (158/9/22), she has a page on Marketplace, and has her own blog at http://wetherbysfashion.blogspot.com