Real life is invariably reflected in Second Life, and politics is no exception. Over the course of the year, Trump supporters made themselves known on occasion. But the most visible were the Trump Organization led by JP Laszlo, whom drew attention with their "Trump Wall" prank on Bernie Sanders supporters and were accused of outright griefing. Eventually, Linden Lab would ban JP and several others in the group. Although Linden Lab never gave the reason for the banning, that JP later revealed himself as a member of the infamous Woodbury group was seen as confirmation by some Democrat Party supporters that their opponents were griefers. The remainder of the Trump Organization spent most of the remainder of the election season away from the limelight, sticking around at their Trump Pub. 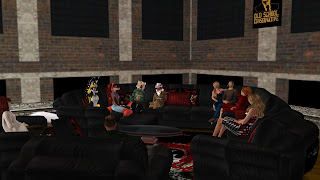 While the Trump Organization was the most visible of those in Second Life supporting the Republicans, there were others that went quietly about their business. Hearing about another, The Republican Party in Second Life, I was initially told they were mostly inactive. But later on I would hear the group did hold meetings while they listened to a conservative podcast. After finding out the place and time, Sunday December 4 at 6PM SL time, I headed over just before the meeting started.

As it turned out, the one doing the podcast was someone I had ran into before, Hatton Hunghi, the avatar of the man behind East Coast Conservative. I had interviewed and written about him in March 2012. More than four years later, he was still in business. As for the crowd, the men and women numbered a little smaller than the one at the "Safety Pin" support meeting for Democrats that I had covered last month, but the big difference between the two groups in appearance was that here, some of the group were furs.

The podcast covered several topics, such as the euthanasia of a man in the Netherlands not for a terminal disease but for chronic alcoholism, the removal of "To Kill a Mockingbird" and "Huckleberry Finn" from a school library due to characters using racial slurs, and the doubts of some Trump supporters that he'll succeed in "draining the swamp" of Washington DC corruption. The topic about the books taken out of the library got the most comments, "What? Are they next going to ban 'Transformers 2' because of the two robots in it they were 'African American,' and there were people demanding a boycott of that. .. Hell, my sister, a liberal lawyer, says that the most racist movie of all times is, get this, 'Blazing Saddles,' which utterly destroys racism." "The book issue was simply done for political correctness." "They are trying to remove history." "And those that got offended are ones who chose to ignore American history in which it happened or failed to understand what happened in the past." "The left does not teach in school how racist (President) Wilson was. People have to teach themselves that and the entire eugenics movement of the 1920s is avoided in schools." 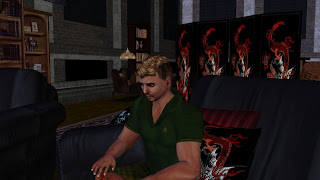 Following the podcast and a short break, Hatton congratulated me for the continuing success of the Newser. He told me he had changed the schedule of his podcast as well as the name and website to "Front Porch Political Talk" (http://www.frontporchtalk.net/), as well as the location in Second Life, "I changed the name and schedule in 2015 but almost everything is the same.  I've had to shift locations a few times as sims have shut down.  It happens in this fluid world."

Bringing up the election, Hatton drew attention to his avatar's appearance, "There's a reason I keep my hair shaved short. So I don't pull it out. ... Me personally, I started off as a Ben Carson fan.  Then I went to Cruz but only lightly. Since I'm not enmeshed with any party group," meaning he wasn't part of any GOP organization, "I had a lot of fun watching Trump twist their ... well, you know." When I asked if he expected Trump to last long after announcing his candidacy in 2015, "Not in the least.  I said on the show that he was creating an oxygen rich environment and expected him to set off his own spark as well. I'm not a member of the "Never Trump" group but I'm watching his actions with a lot of caution. Larry (the older voice you heard on the call) is more supportive than I am and I think many of his generation are. If nothing else, I think his administration is going to give my show a lot to talk about over the course of his Presidency."

I asked him why he thought Trump was able to get the Republican nomination, and then win the Presidential Election. He answered, "Overall part of it is the tone and method of his campaign.  Trump was the non-politician, effectively the third party candidate. Only he ran as a Republican.  He doesn't talk like a politician and he doesn't act like one. And there is a subset of the electorate that craved that attitude. He also didn't speak down to the voter, he spoke down to his competition and pointed out their faults.  Doing that won him favor as well.

"As far as winning the election?  There are a few different answers and it depends on the state. Pennsylvania and Michigan are two states where his message resonated with the working class strongly. All that said, his campaign also did a great job of getting him more exposure and positioning a greater rural return. He played the electoral game just as well as any politician, but spoke like no other candidate.

"The other reason he won was because the Democrats nominated Hillary Clinton, regardless of the fact that she is the epitome of what at least half their base didn't want. Despite the money she spent on ads, Trump just had to cough funny and he'd get free coverage from the Media, then he could use that in the ads that his campaign ran."

I then asked, "Earlier you were saying you were watching him with caution. What you you expect from his administration?" Hatton answered, "I do expect a sea change based on his cabinet picks, but anything that requires Congress is going to be less reliable. The Affordable Care Act is definitely going to be changed drastically or removed altogether. I expect he'll follow through with his trade plans. Foreign affairs will depend on who finally makes it in as Secretary of State." 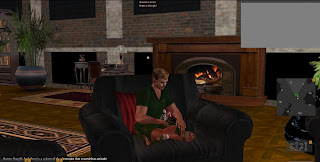 I then brought up the strong reaction of some Democrats and the "Safety Pin" support group in Second Life. Hatton responded, " recorded a video on the day after the election that covered some of the initial responses I saw on Facebook from both sides.  Most of what I saw from the DNC and the left was, 'why did I even bother?'  My video comment was something to the effect of the fact that they should be proud of what they did, own their efforts and whatever impact it might have had on lower ballot races and proud of the fact that they live in a country where there can be open conversation about differing stances.

"For the most part I stand by that, though the violent riots and some of the other reactions have been over the top. As far as the 'safety clip' wearers, their issue," which he thought was immigration, "still has a lot to be figured out. I know that Trump has modulated on a few issues, and am pretty sure immigration is going to be one that he continues to adjust focus on."

When I asked him if he had anything else to say, "Only that it's important to remember that there are political issues beyond the election, beyond the news items that go above the fold and they need to be discussed just as much as Trump's latest tweet.  In some cases they're more important."

A peek at the group chat revealed some variety of opinions. While some expressed full confidence in Trump, some had some reservations, "(I) don't mind admitting, I am absolutely glad Clinton will not be president, but I'm a bit nervous about the President-Elect, too." While most of the chatter was about politics, some asked about the fire in Oakland California which killed over 30 people.

Like four and eight years ago, the Republican supporters in Second Life have been active as were the Democrats whose beliefs they often clashed with. Originally with a Republican President and then a transition to a Democrat one, for eight years they were the "loyal opposition." Now once again, the Presidency is going over to a Republican. But as the President-Elect will be unlike any leader before, while some are eagerly awaiting his term with anticipation, others of the conservative side of political thought are expressing more cautious optimism, and occasionally caution. No doubt Hatton Hunghi's podcast and the Second Life Republicans will have much to talk about in the next four to eight years, and beyond.