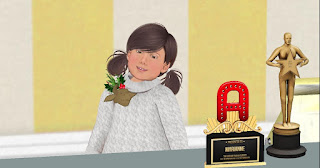 Marianne McCann would say that Bay City is a themed Mainland city, created by Linden Lab back in 2008. Since then, it's Residents, with some help from the Lab and their moles, have helped see the city grow into a virtual community.  That was exactly what Marianne said about Bay City.

"Oh yes," Marianne told me, "Well, the way Bay City was described by Linden Lab before it opened was 'the American urban experience, between 1940 and 1965, perhaps best typified by Chicago circa 1950 and marked by a distinct deco influence."'

When asked if Bay City has a council, Marianne said, "Informally. There is a community group, called the Bay City Alliance, that meets every Tuesday. I run the meetings, but everyone who attends has a voice."

Marianne joined Second Life back in early 2006 after a couple of her friends recommended it.  For Bay City, back in 2008, Linden Lab was promoting it on their official blog.  She was already interested in "city land" and had been eyeing parcels in the Nova Albion city area, but the mid-century theme of Bay City was right up Marianne's alley.   She was one one of the early land owners in the city, winning her first Bay City parcel in the initial land auction. 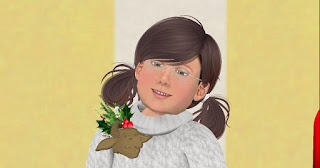 I also asked her about what inspired her in her choice of avatar. Marianne said, "I started to play a kid avatar about a month after joining, in part inspired by other friends who were kid avatars. It's a way to let my more childlike self - what one might call their "inner child" or what not - out to play and have fun and be silly."

I asked her about a controversy that happened several years ago involving child avatars.  Marianne said, "Well, that's a complex question. I'd say there were a couple times child avatars have been viewed as a controversy. The biggest of these was back in 2007 after Report Mainz, in Germany, did a piece on the trading of real life child pornography on Second Life's servers, as well as simulated child abuse between an adult and a child avatar. This was, essentially, resolved by Linden Lab putting restrictions on the type of content that child avatars can use, and the actions they can do."

I also asked her about her involvement in Burn2 and Second Life birthday.  Marianne said that she has a "bad habit" of volunteerism.  With Burn2, she ran Inner Child Camp, which led to further involvement with the event.  Nowadays Marianne and her inworld brother have been called on three times to build and script "The Man" and the "Man Burn."  As for the SL birthday, she first displayed back at the 3rd birthday event, and have been a part of many years.  "Back around SL9B, when the Lab had pulled their direct involvement with the event, I and a coalition of other residents worked to put on our own birthday event. We have since kept at it to this day." said Marianne.

When Marianne was asked about Bay City's position, Marianne said, "Well, I think everyone wants the best and the most for their hometown, regardless, and I know I've very proud of Bay City and want to see it continue to flourish. I think we have gotten a fair amount of attention over time, but I'm always willing to see it get more!"

Finally, I asked Marianne about her plans for the future. She answered, "As far as Bay City goes, we're in the midst of finishing up a project we've been working on for a long time, which is Enter Bay City, our Community Gateway for new SL users. Beyond that, I hope to see all of us, including myself, continue to flourish and grow."

After that, I told Marianne goodbye and wished her well. As one of Bay City's most visible residents, Marianne sets a fine example.