For my furry friends at the Sunweaver/Angels community and elsewhere, one of their pet peeves is being harassed or banned about their appearance when they go out looking at different places and clubs. Some consider it common to the point they'll hang out only at places they know have other furs or call themselves "furry friendly."  Grease Coakes wrote about his experience, and I've written on the topic myself. Personally, I've found it a rare experience, though still annoying. 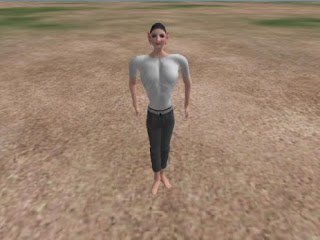 So it got my attention when a "coconuteater" wrote on "Blog Veridical" about being banned at a club "within three seconds of my avatar entering the building." He Instant-Messaged the owner, "Hello, why am I banned?" The owner's answer was, "I smell a lot of trouble, and I'm not up to it today." "Do you think I'm a griefer or something?" "So you think I'm an idiot?" While he didn't give his account name, he did show his appearance. This was a human avatar, but it was oddly porportioned, with a huge chest with wide shoulders, tiny arms, and big ears. He was also barefoot.

There were a number of comments after a link to the article was posted on the "Second Life Friends" group in Facebook. Some offered sympathy. Some suggested he simply go to a different club, "Shallow sl saddens me this is what it comes down to judging by a persons looks shame on all of them." "Even pixels get judged these days........sad times." Some were saying he needed to update his looks, "Thats the lesson here.. leave those noob looks back in the past where they belong. this is 2017 .. not 2005 .. noob feet ( AKA Duckfeet ) are out.. Noob hands out. block head.. out. layer clothing.. dead as dust." "If we were friends I'd strongly encourage you to improve appearance. You don't have to have a mesh body. ,,, Put some effort into making the visual experience more realistic or at least show you care about what you look like."

Others were saying his odd appearance was the kind favored by griefers, "I definitely think 'troll' seeing this avatar. ... you know what they say, first impressions matter." "I cant help but feel your intentions were to stir the pot, everyone knows that extreme noob looks are usually a griefers preferred appearance. If it was my club and i saw you come in looking like that, i would also be atleast worried drama was coming." "i have to admit u look like alot of the griefers ,j\s. nothing aginst u. jus really u look like a griefer" "If you've been in Second Life for more than a couple of years, and have been to clubs or gatherings - you KNOW that many (not all) griefers like to drastically deform their avies to look crazy. You know this. So if you're not a noob, why would you drastically deform yourself to look like a griefer? Come on now. Keep it real. People who've been griefed are going to have their guard up and when you manage a CLUB, you MUST keep a lookout for people who look every bit like a griefer. You don't wait for them to do it. ..." "That avatar looks like a classic griefer avatar."

And a few were saying yes, it did look like the stereotypical troll avatar, but avatars like these they encountered weren't always that. "That being said a lot of people have used this game to bully and harass people in a certain manner. You can understand why some people are so quick to judge, but it should really be by your actions not how you look." "There was a time when the 'different' avatars were the ones with big boobs, tans, perfect hair and giant pectorals. The avatars that people consider 'griefer' avatars were once the far, far more common avatar you'd see on the grid. Insisting on looking 'different' *is* a choice. Some people don't want to look like a cookie cutter copy of someone else's distorted notion of perfection, or acceptability. They just want to express themselves. Your comment reminds me of how outcasts were treated by the popular crowd in high school. As long as people don't act out, or have an avatar emitting giant Bill Cosbys, I say let them be. Even if you have had a rough day, ejecting people just because of their appearance is lazy."

One comment got my attention, "What it comes down to is how much time you are willing to put in to growing your group and making it a place for all... last night I had a potential griefer on my sim (1 day old, dressed like it and a naughty word name). So I TPed to him and asked him how he was doing... it took me a short ten minute conversation to find out that A) he was new and B) he was really liking SL... I made a friend, not a potential enemy down the road. A**hattery like the club owner pulled will make more enemies than friends...if you don't have an enemy before you ban someone, you usually do when after you do... in this case, an enemy that will post about you on his blog."

About the only thing most agreed upon was ultimately "his sim, his rules." Even those who sided with the writer, there was an admittance he was within rights to do what he did. They just felt he shouldn't have.

This isn't quite the same as the situation furs and other fantasy/sci-fi avatars such as faries and elves, who can spent plenty of time on their looks. But still, it brings to mind the old story of those who are different being singled out and being told they are not welcome.

Do you the readers have any stories of your own, or stories about handling someone new who stood out?