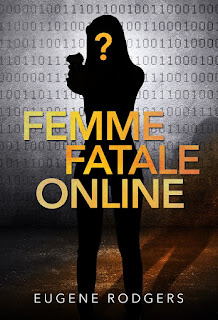 There was a book published in April this year, "Femme Fatale Online," written by Eugene Rodgers, that would be of interest to some in Second Life. The story takes place partly in a virtual world much like Second Life. A man named Rick goes by the name Issac in the world, and befriends a beautiful lady avatar named Joan. Joan arranges for Rick to get a job in real life with Molcom, a large corporation that's made breakthroughs that could potentially lead to practical nuclear fusion power. She lures Rick, who is married in real life, into a virtual romance. Then she blackmails him by threatening to mail recordings of the tryst, ordering him to commit industrial espionage. As time goes on, she threatens to harm he and his family as well. He realizes he has to find out who she is, and comes up with a list of suspects he has to narrow down before he's discovered.

Rodgers contacted me, and corresponding with him I found he had been going by the name Adolphe Menjou inworld years earlier.  He also had a couple alts, "my book's hero, Rick Collins," and "Joan d'Arc, the book's villain." But unfortunately, a problem came up, "when I returned to SL last year after a hiatus, Adolphe had become a white cloud and I couldn't revive him." So he got another account, Isaacasimov1 Resident, whom still has "off-the-shelf" looks, "I ... did nothing with it since all my inworld time was with Rick or Joan." 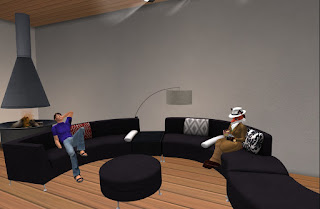 We met up at "Rick's Ranch," the place he called his inworld home. He apologized for some slow responses early on, "I'm a bit rusty on the controls, plus I'm a crappy typist." I brought up by the rezz date on his first account that he had been in Second Life for over ten years. "Technically, yes," he answered, "But I left dfor several years and came back last year. ... The place has sue changed. All my friends are gone." I asked why he left for a while. He responded, "Started writing the book! My first attempt at fiction, so it took a long, hard time." I asked him where he got the idea for the plot. He told me, "I started to write the book as nonfiction. I wanted to show what life was like in a huge corporation. But I decided fiction would have a greater impact. I was in Second Life and thought of the idea for the book. So besides corporate life, I could also show readers what a virtual world is like. Most people have no idea what corporate life is like or what a virtual world is." 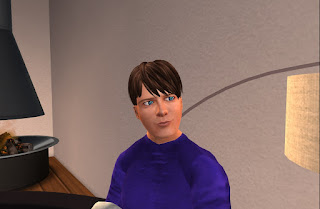 Following up his comment about corporate life, I brought up, "I recall you saying, 'One character proposes what he calls the 3B’s of business success — backstabbing, butt kissing, and bull throwing.' Was he being a pessimist, or being accurate in your opinion?" Rodgers/Issac answered, "Accurate! The original nonfiction idea would have been mostly about the 3B's, 'The 3B Approach to Business Success,' my idea of a tongue in cheek title.But in the book I would have used a less delicate word than 'bullthrowing'." I asked if there were any references to "Dilbert," a daily comic strip by Scott Adams about an office cubicle worker dealing with a dimwitted boss and less than sympathetic coworkers. "No references," he answered, "but it's very much like Dilbert. I tried sending a message to Scott Adams, but couldn't get through. He once worked for a corporation." 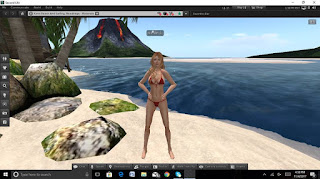 I brought up Second Life once more, "How did you find your experience here?" "Loved it!" he told me enthusiastically, "Especially meeting people from all over the world. And the anonymity allows people to open up. I really got to know some friends well. One person I never got to know at all. And she was mean, but interesting. She became the villain, Joan, in my book." I asked if the characters from the business were based on anyone or completely made up. "Fictional," he responded, "but everything that happens in the book is a disguised version of what actually happened to colleagues or myself. The corporation, Molcom, is a composite of several huge corporations."

I asked if the fictional virtual world was almost like Second Life. He answered, "Yes, but technologically much more advanced. For example, I had to invent a way to make AVS perfect reproductions so the blackmail would work. So Rick's AV would look exactly likehim and the videos of his romancing Joan would seem real. ... the basic AV there is like AVs here. You can make them look like whatever you want. In my fictional world, you have to spend a lot of money to make a perfect AV.  I think I saw once where someone took photos you sent in and made a realistic AV from them." Of nonhuman avatars, Rodgers/Isaac told me he didn't come up how those came about or their use in his story.

Of the plot in the story in which Joan blackmails Rick and he has to try and figure out who she is to stop her, I asked how does he come up with a list of suspects. Rodgers/Isaac answered, "Various ways, careful observation and deduction. He realizes she must live in the Pittsburgh area and works for Molcom. He actively seeks some clues, interviewing a person in the virtual world, PP, who's a friend of Joan, eavesdropping on her meeting with friends on a beach." How Rick finds out, he wouldn't say, "You don't know until the last few pages that he succeeds. I tried to write a page turner. I also inject suspense by having a real-life sexy woman try to seduce him. You don't know until near the end whether she succeeds (either). Sex sells!" 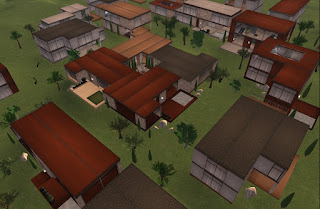 Rodgers/Isaac felt virtual reality would soon skyrocket in use among the general public, " I'm going by news stories I've read. The investment community seems to expect virtual reality to take off soon. As you know, you can already buy limited versions. When that happens, goodbye SL! Unless Linden Labs gets into virtual reality." When I brought up Sansar and it's low numbers, he responded, " ... I don't think Linden Lab is very business savvy. Second Life isn't what it was years ago when I ws active. Some people think Facebook stole its thunder. Maybe it's the proliferation of social media.  I don't know. I know when I came back all my friends were gone and my old haunts were deserted or almost so." He wondered if the enthusiasm was gone, though seemed to feel more optimistic when I mentioned the Relay for Life, "If my book sells well, maybe more people will become interested in Second Life. ... If you're keeping busy, then I guess SL still has some excitement left."

Rodgers has published some books before, "'Beyond the Barrier: The Story of Byrd's First Expedition to Antarctica,' which is still in print after 27 years, and 'Flying High: The Story of Boeing and the Jetliner Industry.'" He told me the books sold well, "especially the Byrd book. ... On the basis of the Byrd book, I became a technical advisor to a woman who did a book that came out in January called 'The Stowaway' about a member of the Byrd expedition. I understand it's doing well." Transitioning from nonfiction to fiction, "I find fiction to be much different from nonfiction, a big surprise to me."

Besides having published three books, Rodgers is a retired public relations writer for several large corporations and managed public relations for the Westinghouse R&D Center. He was named Virginia author of the year in 1991 by the Virginia College Store’s Association for the first printing of "Beyond the Barrier." He is married with a grown son and daughter.

For more information on "Femme Fatale Online," check out it's Facebook page at : facebook.com/rodgersmystery .