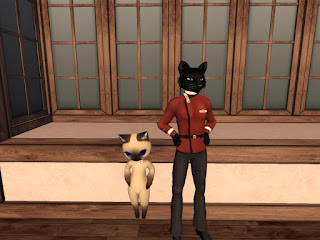 I had a chance to get together with Captain Jarak Panther (jarakpanther) and his partner, RealCoffeeCat at their house. They have just became partners. Jarak's RezDay was on February 12, 2013. CoffeeCat hasn't celebrated her first RezDay yet.

“I mostly chat with people in the different sims around the grid,” said Jarak, CoffeeCat nodding in agreement.

I asked Captain Jarak Panther if he is a captain of a Starfleet ship. “Just in character," he replied, "I don't have a ship in Second Life, and am not a part of any Star Trek role play groups.”
I then asked Jarak  if he roleplays. “One on one, yes. I used to be a part of a few role playing groups, but they didn't work out very well.” he replied.. “We are thinking about roleplaying with each other.” RealCoffeeCat said with a smile. I wanted to know what Jarak's hobbies on Second Life. He answered, "Being a bad kitty. If you don't believe me about that, just ask RealCoffeeCat.” . That got CoffeeCat to chuckle.

I asked Jarak if it's true that he doesn't have wifi at his place. “Yes. However, if I had Internet at home, I would be able to use voice chat, and would possibly be able to play guitar for people over voice chat,” he replied.

We started talking about Jarak and CoffeeCat. Of when he first met her, he told, “Here, actually in Cape Heron. We became really good friends right away, and not too long after that, we were partnered to each other.”

The next question is what Jarak's goal on Second Life is. “To meet new friends who share similar interests.” he replied.

The next thing we talked about got Jarak surprised. “Do you know that you are an uncle on Second Life?” I asked him. “No, I didn.'t That surpurrrrrises me,” he replied. When Jarak was told that one of his nieces is a Pegagsus and another niece is an unicorn, he has this to say, “Wow.”

The last question is if Jarak ever felt that he had accomplished much. He answered, “Yes. From being a small, and frail child who was supposedly 'retarded,' and would never be able to sit upright, or walk, or talk to a self taught musician.” With that, I looked at his partner, CoffeeCat, who was nodding in agreement. She did not talk much during the interview, it is clear that she is there for partner.