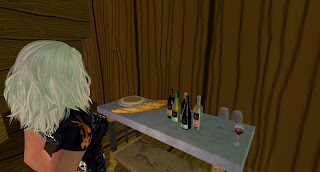 I arrived in SL in March of 2009, and spent most of my first year just wandering about exploring, shopping, and listening to music. Wanting to actually do something creative and productive, in April, 2010, I took over the Azure Jazz Club and Gallery from Dem Uriza, and hosted both DJs andlive musicians like Joaquin Gustav, Melodee McDonnell, Ichie Kamachi, MoShang Zhao, CECI Dover, and many others, and exhibited artists like nessuno Myoo, KIcca Igaly, and Edward Vintner. We also featured Trivia and Tunes every Thursday night, hosted by Clancy Huckleberry with music from DJ Sparrow Letov-Meredith. I even dabbled with a poetry night and a comedy night.  I closed the Azure in May, 2011, frustrated that I was unable to break even let alone make a profit. But mostly it was too time consuming.

I intended to spend the rest of my SL time doing nothing, but sometime in 2012 or 2013, I was bitten by ambition again, and I opened the Riverside Cafe and Gallery Graine on the same sim where I lived, at first just to revive Trivia and Tunes, but then began to host regular live music events again, and even started hosting weekend-long, multi-artist music festivals, The Riverside Ambient/Classical Music Festival, and a second festival that was more pop-rock and vocalist oriented and usually named after the time of year it happened in (the Riverside Summer Splash, for example, and I always had a Christmas Holiday Music Festival). 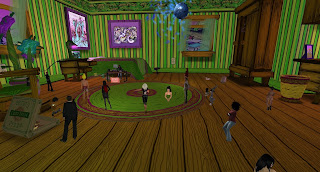 In my new gallery I featured such artists as Kayly Iali, Masako, Mathilde Vhargon, Aruba DeCuir, and most recently, photographer Anibrm Jung. (I even had my own amateurish stuff on display once.) Sometime in this period, I can't even recall exactly when, I heard that Scottius Polke's otterly fantastic interactive art pieces, mushROOM and The Docks were going to be taken down for good. A big fan of Scottius (all his fans are bigger than him, actually), I offered to host it free in the sky above my sculpture, but only had enough prims for mushROOM. I have been honored to showcase this SL classic until, and hope it finds a new home soon. I believe that the Lindens should accommodate it as part of their SL historic preservation program. 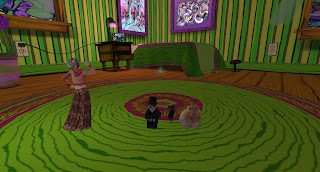 Around the same time I took over the Azure, I began hosting Djs and live music at Avian Retreat, a nature preserve for birds and bird lovers, created by my friends LadyDi Andel and Zoezoe Xue, in an effort to bring tips and traffic into their mainland sim. Mostly, I hosted the same performers who played at the Azure, with some even preferring to play the "outdoor" venue with its round stage floating on the bay.  Health problems caused both of them to be absent for long periods of time, and eventually my dear friend LadyDi passed away in 2015, and Zoe also has left SL due to illness. But before she passed away, I purchased Avian Retreat from her to prevent her from having to close it, and I promised her and Zoe to keep it up and running as long as I could.

Eventually, I stopped hosting music events, including the festivals. I stopped featuring new artists in my galleries, and continued with only Trivia and Tunes on a regular basis. It got to the point where it became too expensive in both money and time to own so many pieces of SL real estate, and RL was starting to make more demands on my time and money. 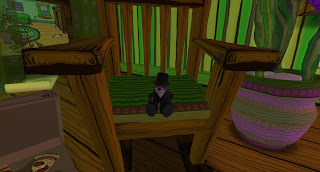 Then on April 29th of this year, our longtime Trivia and Tunes DJ, Sparrow Letov-Meredith, passed away suddenly, followed recently by our trivia diva Clancy Huckleberry announcing her retirement from SL and the end of our nearly ten year run of trivia. I had been contemplating closing the cafe and galleries at Blue Curacao, and moving trivia to Avian Retreat in order to save expenses, but now I felt that RL was forcing my hand.

And so it ends. Or maybe not. I am not leaving SL and Avian Retreat still exists, so who can tell what the future holds?

Graine Macbain
Posted by Bixyl Shuftan at 6:00 AM