One of the events the Relay in Second Life is known for are the "Bid Me Bald" events, started by the Relay Rockers and caught on with others. But a Relay team with a lot of furry avatars, well, something different is called for. In the early days of the Newser, the Passionate Redheads would hold a number of "Bid Me Human" events, such as the one that left Rita Mariner "in the skin" for over two months. As time went on, the Redheads transitioning to the Sunbeamers, the "Bid Me" events began to show some creativity and variety when it came to what to be bid on, from other types of avatar besides human, to a different color, and more. 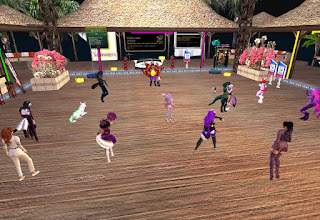 Thursday April 8 was the final day for DJ Matt/Matt Carlton's "Bid Me Pink" fundraiser. For Matt, she felt a little pressure to bring in plenty of Lindens as she wanted to match this season the amount she made last year, which included 60,000 L raised at one event on Fantasy Faire's last weekend. This was also the first "Bid Me" in which the kiosks were located at the Bouncing Bunny Beach Club, the newest venue in the Sunweaver community where most (but not all) of the Sunbeamers make their home. This was partially to help draw attention to the new venue, and partially because Matt has a DJ event there, and her fans would be inclined to donate then. By the last day, Matt was already at two weeks with over 5,000 L raised.

As this was a special Relay fundraising event, Matt didn't take any tips, instead asking that money be donated to the Relay kiosks, and the cheeky pictures at the bunny-themed venue were covered up. The contest theme was "Best in Purple," so several people came in purple outfits, purple fur, or both. A number of people were there, including club manager Snowbuns (Skylark Lefavre) and owner Nydia Tungsten (Rita Mariner owns the land). Other people showed up such as Rosie (RougeRedHead01 Resident), the newest reporter for the Newser, and Gem Sunkiller. Several people would also send remote donations.

Matt would play songs such as "It's a Great Day to be Alive," "Live Like You Were Dying," and "Angels Among Us." Among the last he would play for his set was "Clouds" by Zach Sobiech, a young musician whom was diagnosed with terminal cancer when composing the song. (https://youtu.be/sDC97j6lfyc)

We could go up, up, up
And take that little ride
We'll sit there holding hands
And everything would be just right
And maybe someday I'll see you again
We'll float up in the clouds and we'll never see the end 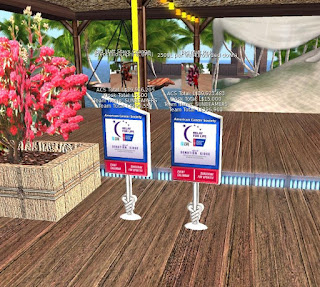 By the end of the first hour, Matt was already at 7,500L in the "pink" kiosk. Thanks to more donations coming in, by the close of Matt's performance, the total had risen to 15,000 Lindens. With 500L in the "stay orange" kiosk, this made for a total of 15,500L raised, and a comittment of six weeks in pink. Matt thanked everyone over the radio stream, which got someone musing, "First time I heard someone say thank you for being forced to be pink." Matt responded, "I like pink, but I Chose pink this time as my Aunt just fought Breast Cancer and won. So fitting, I thought."

Matt had offered a little bonus if 10,000 Lindens or more was raised. If that goal was reached, she stated she would spend at least half the time in the "Bid Me" period in Relay clothes. This could be either her Team Sunbeamer outfit or some other Relay wear.

The contest was won by LiskaBystrouska Resident. 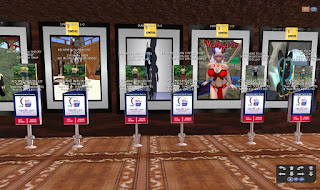 Saturday April 10 was the last day of three "Bid Me Foxy" fundraisers. The volunteers for these were Shockwave Yareach, Cynthia Farshore, and team captain Rita Mariner. The kiosks were at Club Cutlass, and the fundraisers were totaled at the end of the party that night, at 8PM SL time. Shockwave and Cynthia got identical results: 250 Lindens each in the "Stay" kiosk and 7600 Lindens each to go vulpine. They'll be in their new looks for three weeks. For Rita, her default kiosk got 50 Lindens while donators chipped in 5050 Lindens for her to go vixen. So she has to deal with jokes about raiding coops for two weeks. With three people made foxy all at once on top of the existing number of foxes, there were jokes about a "foxolypse," as well as wondering if there'd be a run at the KFC.

Cynthia was DJing for the Relay USO event that night, and Shockwave was with her. So they didn't have to change until that event was over. The three fundraisers brought in 20,800 Lindens. 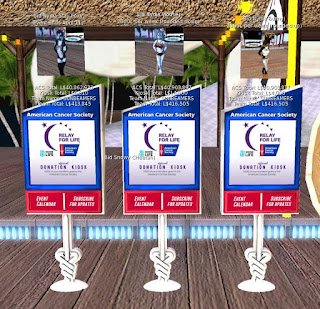 Finally came the end of Nydia Tungsten's "Bid Me Mouse or Bunny" fundraiser. This would be on Sunday April 10. Like Matt's Bid Me, the kiosks were at the BBBC, and the fundraiser was timed to end just as a party at the club was ending. Compared to the other Bid Me events, the default kiosk was making a strong showing. In the two hours, several thousand more Lindens were added to the kiosks. There were a few people coming by whom hadn't been to the club before.

Finally at 5PM SL time, the totals were finalized. 4,000 Lindens had been donated into the "Go Bunny" kiosk. The "Stay Vixen" kiosk had 6,010 Lindens. The "Go Mouse" kiosk made more than both combined, making 14,000 Linden dollars. As Nydia had pledged a week for every 2000 raised, normally this would have been seven weeks. But she had a surprise. She decided not to count just the amount in the winning kiosk, but the total of all three combined, 24,010 Linden dollars. So this meant 12 weeks, or three months. At the close of the party, Nydia changed to a mouse form, and her partner Brandi Streusel, whom was already a mouse, gave her a hug. There were more than a few comments about cheese recipes. 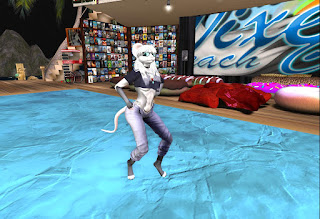 All five of these Bid Me events raised a total of 60,310 Linden dollars. Counting offline donations, this has brought the total raised by Team Sunbeamers past 450,000 and a half million, or Jade Level, within sight. This isn't the end of the Sunbeamer Bid Me events as DJ Snowbuns volunteered for one (more on that one later), and no doubt there will be more. With this combined with DJ Cynthia and DJ Matt helping out other teams, the Sunbeamers are continuing to be a top-ranking team in the Relay for Life in Second Life.

Posted by Bixyl Shuftan at 6:30 AM