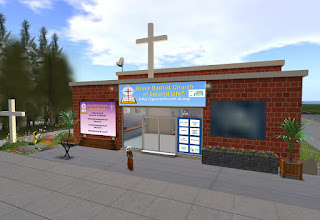 It was seven years ago that the Newser reported about the Grace Baptist Church. This Easter weekend, when I was looking for a church to write about, they just happened to be having an afternoon service when I took a look at the place. So I went in. As before, the church was in a brick building with a chapel and two smaller rooms. In the smaller building was what looked like a 50s dinner. This time the pastor was Pastor Michael Boyd (michael Baily). He was giving his sermon on voice, and when I stepped inside, some of the parishioners greeted me as I took my seat. At the end of the service, he turned on the screen and invited people to sing along in real life to the woman singing.

After the service, I spoke to Pastor Michael, whom answered in voice. He was happy to hear I had been there before, explaining I probably interviewed Pastor Bryan Sarjeant (leroy.zoon) shortly before he stepped down. "Brian and I were co-pastors for a while," he explained, saying the man had to stop for health reasons. Brian had been an Army ranger, ended up on disability, and "struggles with a lot of things." He had been ministering on a regular basis until it proved too much and overwhelming for him. 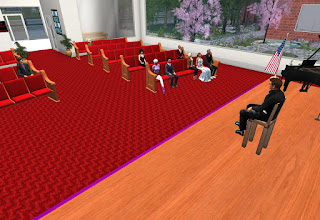 Brian was with Pastor Michael for his first year. He did say if he had a problem, Brian was always available, "He hardly comes on Second Life any more." He does continue to maintain the church's website ans "the behind the scenes stuff." One of the more interesting things Brian does, Michael described, was when he assumes control of the church's bot account, which really does look like a robot. The robot will walk out of it's usual place in one of the smaller rooms and step outside to pay the tier.

Pastor Michael told me he had 22 years of experience in the ministry in real like church. Doing so in a virtual church can be quite different. But on the other hand, it fits into his skills in both ministry and computers. Plus he told me he's not as quite as mobile as he used to be, saying he once had a health problem that led him to almost dying in the hospital. "This is where God led me, and I'll stay here until He leads me somewhere else," he explained.

Of what experiences stood out, Pastor Mike thought for a moment, then recalled "this gentleman who came in" whom was in his 70s to 80s. He ended up passing away, "we had a memorial service in church for him." There was also one lady, Amy, whom offered to decorate the church. But "the all time best, I came one morning, the building was gone!" Fortunately Brian came by to fix the problem. So Pastor Mike could chuckle about it, "Only in Second Life can a building just walk away."

I then brought up the Pandemic, and asked if over the past year many more people have been coming. Pastor Mike answered, "Yes, but not as many as you would think." He told me a few more came, but he didn't get as big an influx as expected. It seems more people are opting instead to see live video over Youtube and livestream, "not so much Second Life." 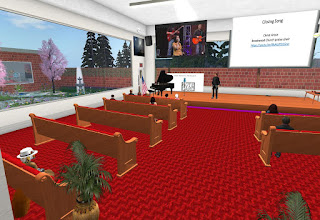 Boni, one of the parishioners, had a few things of her own to say (also in voice), "The one good thing about this church, they pray for you. They will stop right there and pray for you. ... Prayer is a big thing, it's really important. ... We here, the Bible says pray without ceasing. That's our communication with Him. ... That's the one great thing about this church, outreach ... prayer time after Bible study ...people can submit their prayers.

"I do know one thing, people who can't get out because they're disabled ... for me, it's been great to come to a church that preaches God's word, outreach to people ... at the end of every message, 'You are the church, go be the church.' ... It's helped me in my real life, share on my FB page.

"It's been a great experience here. From the right side of my heart,my own experience. I enjoy coming here. ... There are times I can't come, can listen to a mixer. Three different ways, SL, mixer, and Youtube. On Youtube, a chance to listen to it later. With the busy schedule everyone has, sometimes you have to listen later.

"It's not how full the pews are, but reaching people where they're at. People walk in and out all the time, you never know. ... The mustard seed you plant may get watered by someone else."

Of nonhuman avatars, Boni commented, "I went to this thing one time, Virginia and I went to a place that was all furries," and mentioned they were from a group called Faith-filled Furries, "Some churches will say no furries or ask you to leave for some reason, but not here." She would say the only people asked to leave were ones being disruptive, such as trolls. She went back to the furs, commenting at one prayer one fur asked that someone's mike be turned off, that the group didn't want to use voice.

Virginia, whom was there, had this to say, "I'm so happy I found this church in Second Life.  We're blessed to have this church here.  I was just talking to someone that was here tonight he was so happy he was here.  He's been to a few other churches in SL."

Someone got out a pink hammer that made cute "boink" noise, and they were joking about it being the ban hammer for a couple minutes. Then the people left needed to head out.

The Grace Baptist Church meets on Wednesdays and Saturdays at 5PM SL time, and on Sundays at both 5AM and 5 PM. They also have a Thursday Zoom Study at 4:30 PM, and a Friday Bible Study at 5 PM SL time. For more information, one can check out their website at http://gracechurch-sl.org , or email them at pastor@gracechurch-sl.us .