It takes a lot to impress me these days. After being on the grid for almost five years, I've pretty much seen it all.

Enter Bronyland, started by, of all things, 4chan?

That's right, started by a 4chan meme on /co/, the "My Little Pony" incarnation currently all over Youtube and TV is now in SL as the "Bronies", a beerslam of "bro" and "pony." Joining the group and rooting through the notices gets you a easily-edited Brony avatar (the hud is unusual, you color the spaces on the hud itself, click sync, and it does the work for you, rather than you editing each individual prim), and searching a bit more you'll come across landmarks to the Bronyland sim.

Curious, I teleported over. And holy HELL, the place is bustling and packed. It's packed with cuteness and sweetness, the perfect spot to unwind when you're in a cute-sy, kiddy mood. I tracked down Twinkle Swizzle. the Lady Of The House, and we got together for a little interview.


Xymbers Slade: Ok, my first question is, how long has this place been up? This has to be a "new meme", and yet the sim looks -really- fleshed out right now.

Twinkie Swizzle: We've been here in this sim for about a week. It was formerly My Little Project sim, but decided it would be better served as a home for the Bronies. We currently have a ticket in to change the name to "Bronyville."

Xymbers Slade: It's certainly become that home. It looks like it sprang up overnight. How did this whole thing get off the ground? I saw a pony in a sandbox a few weeks or so ago and thought "Ok, THAT'S cute." Just a random idea cribbed from 4chan?

Twinkie Swizzle: The week before we moved here, Curly had a little house on a 1024 lot in "Sim." It was interesting packing 30+ people in there. We needed to spread out! Hee-hee.

Xymbers Slade: Yay lag then. I just came from the Korea sims and they're laggy a bit. 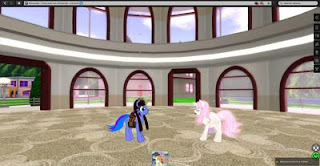 Twinkie Swizzle: It all started in late 2010 when Lauren Faust released the Generation 4 “My Little Pony” on The Hub. Because of the super cute art style and fun personalities of the characters, it went viral. 4chan has a weakness for cute.

Xymbers Slade: How many members does the group have right now? Worried that things will go out of control if there's too many to keep track of?

Twinkie Swizzle: We currently have 1681 members, and it's growing by about 100 members a day.

Xymbers Slade: I think the Mentors had something like 2500 before Linden Lab told them to screw off ... heh. Since this whole thing started on 4chan, do you get hit with a lot of griefers who don't like the idea of "cute and sweet"? Most people don't equate 4chan as having a weakness for cute.

Twinkie Swizzle: We went from 30 members to almost 1700 in about two weeks. I'm totally blown away by how many fans are actually here in Second Life. Curly's pony avatar really helped bring everybody together.

Xymbers Slade: It made me want to build a little again or at least edit, hence what I have so far. (smile)

Twinkie Swizzle: We do deal with the occasional griefer. However we have a mod team made up individuals with a lot of previous Second Life moderation experience in other communities such as Furnation and Luskwood. We are not a furry community per-say, however quite a few of our members are furry.

Xymbers Slade: What do you have planned for the sim? Will it become a place to roleplay? Seeing it's based off a popular show and all.

Twinkie Swizzle: We want to give the fans of “Friendship is Magic” a really fun experience here, if roleplay is what they want, I'm sure we can provide some venue for that.

Xymbers Slade: What's the biggest thing that has surprised you since this first got off the ground?

Twinkie Swizzle: Besides the astonishing growth rate, just how amazing the members are. When you think of chan culture, you think of LOLcats, goatse, and internet memes. The Bronies hold friendship and caring for each other in high regard, so it really defeats the stereotype.

Xymbers Slade: This seems to be a big thing on TV right now. Are you worried about repercussions from the creators of the cartoon if they get wind of this, especially if the avs start selling?

Twinkie Swizzle: We see this sim as more of generic interpretation of cute vectorized ponies and their home, rather than a direct copy of Hasbro's intellectual property. We would never sell anything actually branded as "My Little Pony."

Xymbers Slade: Do you think this is just a fad whose star will fall to earth just as quickly as quickly as it rose? All this work only to go poof if interest dries up?

Twinkie Swizzle: TV shows come and go, but the messages they carry last forever. With Season 2 in the pipeline, we don't really see things slowing down right away. Of course everything has an expiration date, but we're going to have fun while it lasts!

Xymbers Slade: Well, that pretty much covers the questions I had in mind.

Twinkie Swizzle: Sounds fantastic! Thanks for stopping by Xymbers. Brohoof!

This is most definitely a place to visit. Join the Bronies group for access to the avatar and a LOT of modifications (just go through the notices, there are a lot of attachments and things to be had). This is SL Done Right at its finest, not bean counters and lawyers afraid of the aforementioned chan culture.

As of this being typed, all the fun is on the sim called "The Joint", but as Miss Swizzle said, they're getting the sim name changed soon to Bronyville. Go visit, you'll be glad you did.


Xymbers Slade.
Posted by Bixyl Shuftan at 6:00 AM