I heard about another book author in Second Life called Netera Landar. She was nice enough to interview me at her home in SL which was a beautiful sim. Her newest book Deadly Reservations is the third book she has written which involves angels. She also has been working for a newspaper in real life near Chicago, IL as a lifestyle editor. Right now she’s working on a fourth book a sequel to "Deadly Reservations." In real life her name is Denise Fleischer. She started with poetry in high school and moved on with bigger fish to fry in her adult life. In Second Life she also works for the Metaverse Tribune, a newspaper here.

Her wild imagination helped her cook up first book called the guardian. A crusader from the American Revolution is drawn into an intergalactic battle for the fate of Earth. Lea Netera the main character is drawn to a captain who needs her help to fight the Dark Lord of Intarius. Lea is drawn into a battle with the Holians with a talking dragon and more in Netera’s first book. You can take a look here at http://www.amazon.com/s/ref=nb_sb_noss?url=search-alias=stripbooks&fieldkeywords=Deadly+Reservations.

The second book that Netera/Denise wrote is a sequel to the guardian where Lea wants to escape back to her original time period. The odds are against her as she travels back to the Olympia’s past and must fight the army of Intarius to save billions of lives.

The third book she has written is a whole new series with Zoe as the daughter of the archangel Michael is born as a human to investigate the demon Mathias who as a mayor in small towns uses American greed and money to get his way. Only Zoe and David an agent for the FBI know Mathias’s secret that he really is a fallen angel. Zoe has heavenly powers at her disposal including creating a cube which is a holy jail cell for any fallen angels or demons. She also has an AI on her wrist named Charles. Mathias uses deadly assassins to kill anyone who tries to stop him. The sequel is "The Sharp Edge of Truth" that Netera is working on now. 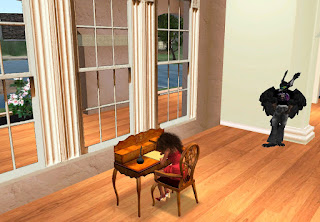 I asked Netera about her hobbies and she happened to like movies pets, reading, and jewelry. She said she really enjoyed the new star trek movie. In fact she mentioned she met actors form the TV series and movies. She met the actor who played Chekov and the actress who played Ohura. She also met John De Lanice who played Q and Brent Spiner who played data the android wanting to become human. She also reviews books on wordpress.com

I asked Netera does she have any advice for any hopeful writers? She said to simply keep writing and you can’t force it. That’s certainly good advice as I kept pushing and writing to publish my children’s book.

Later on in the interview she brought out a robot named uncle Irvin. It showed questions in green text and it gave you back scripted responses. The robot was created by Grey Kurka. 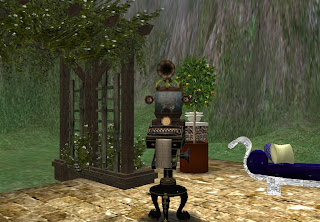 Uncle Irvin: "Hi there. Have you ever been to Europe?"

Grease Coakes: "No I haven't."

Uncle Irvin: "No I don't think I have. Would you like to go sometime? Do you think you will?"

I had to laugh out loud at the last line.

Netera also created and published a magazine called Unforgettable magazine. She gave me the copies that I simply wore and it showed up on my SL screen like a HUD.

Netera seemed like a very busy woman writing her butt off for her own magazine a newspaper in real life, a Second Life publication like I do, and her own stories being published into real life books. Her books certainly seemed original as she encouraged me to stay original and not copy off others.  Well of course no one wants to read something that’s rehashed. If you’re looking for something new check our one of her books at Amazon.  And remember to watch out for angels, one may cube you if you have been misbehaving like Mathias the fallen angel from her book.