Interview with Tuna the Oddfellow of Second Life

A little known secret of Second Life is a magician who has his very own Tunaverse. Tuna Oddfellow, who has been a long time resident of SL since August 15 2005, is a magician in real life. In Tuna's own words, using Houdini as an example, he enjoys pushing boundaries and seeing how far he can get. 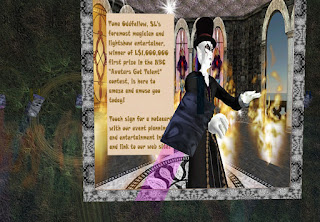 Tuna does an incredible job of pushing boundaries as he puts on an amazing light show, the Odd Ball, for your computer screen that you might see at a dance club. In fact he won a contest held by NBC 4 the TV station as the most talented avatar in Second Life in 2007. His color and lights show wowed the judges, earning him the prize. His prize was 1 million Linden which translates to roughly $4,000 in US Dollars.

His light show at his small land will blow you away. Every Monday at 6pm SL and every Sunday at 12 Noon SL, Tuna meets with Jana Kyomoon, a real life ambient musician who created a music album you can get here. http://www.last.fm/music/Jan+Pulsford/Ambient+Reflections+of+Jana+Kyomoon.


Of Jana, Tuna had this to say, “For Jan and me, entertainment duo is more correct than business partners. Though I would love to work with Jana professionally.” 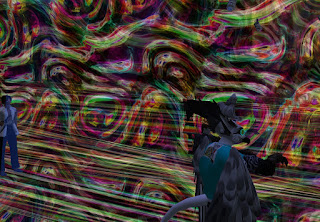 Her album is called “Ambient Reflections of Jana Kyomoon.” I’ve heard Jana’s live music at Tuna’s odd ball and it was very relaxing along with the mind blowing effects that Tuna offers. I had joked that her music is very mellow that it could be romantic. Tuna said that would be too odd though (ha ha!).

In his Tunaverse group he always asks what time is it when his oddball is about to start? His answer every time is:

In fact Tuna claims his real life is stranger still.

Tuna Oddfellow, "Well my Second Life is like my first life, both are stranger than fiction. In first life, I spent years as a magician. You know, finger flinging, sleight of hand, reading minds, escaping from chains the works. For many years I had performed magic at private parties, restaurants, as a street magician and as a master of ceremonies."

Looking up Tuna on the web I saw that He has been a real life magician in real life for 26 years along with his job in Second Life as a cofounder of odd studios. 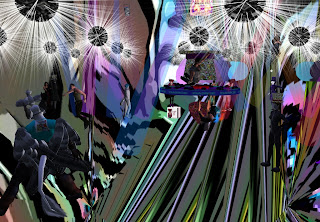 Despite some physical pain Tuna still gets out to perform in real life as he still pushes the boundaries of life,  "I aim to push my own boundaries too."

Grease Coakes, "Oh sure everyone should push their own boundaries to see what he or she can achieve."

Words are hard to express the light and color show that Tuna puts on twice a week so it’s best that you experience it yourself. I remember seeing the lights and colors actually move and not stand still like a normal background. Not so fast that it makes you dizzy more like a slow turn with many colors that your avatar gets drowned in. It’s easy to lose track of other avatars and your own in the colorful world that Tuna creates for you along with Jana’s ambient electronic music.

Pictures say a thousand words sure, but you have to see his Oddball to have any idea what I am talking.

Editor's note: Tuna has certainly been making shows for quite a long time. Good to see he's still at it.
Posted by Bixyl Shuftan at 6:00 AM