Selador Cellardoor is a published writer, who wrote short stories that were published by Macmillian around 1971. Selador's book of short stories was called "The Eye of the Lens," and he suspects that we can still get it if we try.  Selador recently had his 13th rez day.  He is probably the first classical dj on Second Life, But at that time, people rarely came. 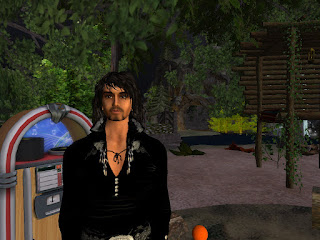 Selador was in the Berkshire Recorder Consort, which was an early music group.  He had to give it up when he developed COPD.  Selador loves classical music and plays it all the time.  Selador is a dj in the Classical Circle Ballroom.   But in real life, he doesn't have much to do with music.  Selador had done some MIDItranscriptions of  classical pieces.  He used to be a pianist as well.  Selador was good enough to do local recitals.

Selador does a dj performance in Classical Circle Ballroom every other Friday.  "A fortnightly event is just right for me." said Selador. Selador said back in time, he wasn't properly organized.  He didn't know whether it is possible to be properly organized these days.  But now, he and some friends are.   Seladoor made a mention of a group.  It is called Classical Circle. Selador explained that the events they have are not solemn and reverent.  They all love classical music. The number of people varies, but they love to chat, dance, and make terrible puns.

Selador's favorite place when it comes to playing classical music would be the Classical Circle Ballroom.  He had done events at other places, but it's not something he would wish to do on a regular basis. Selador had done composing as well on an amateur basis and he had works performed locally.

The biggest thing Selador ever attempted was an hour-long setting of a poem of Mervyn Peake, the Rhyme of the Flying Bomb.  It is a musical poem. When asked if Selador plans on playing classical music for a long time, he responded.  "Yes, as long as I can." he said.  Selador will be playing for a very long time.