A Glance at the Second Life Coast Guard

While looking around at the SL7B, I came across an exhibit near the auditorium with a Coast Guard helicopter and a few vessels. Upon closer inspection, they read Second Life Coast Guard. One of the sailors was nearby, a neko with a parrot on her shoulder, Chakku451 Rieko. I had a talk with Chakku about what the SL Coast Guard does in the Metaverse.


Bixyl Shuftan: So how big is the Coast Guard in Second Life? 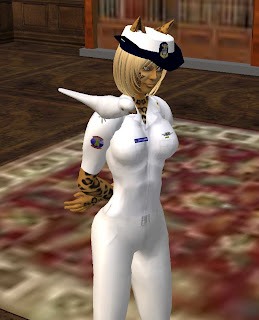 Bixyl Shuftan: Where was your particular Coast Guard group?

Chakku451 Rieko: We're quite active throughout the SL waterways. My particular station is in Kirkstone.

Bixyl Shuftan: Was there just one ship there, or a few?

Chakku451 Rieko: We have one cutter belonging to the station commander. The boat commanders get a Defender class patrol boat and an Atlantic class RiB boat for patrols. Our air wing uses Dolphin class helicopters.

Bixyl Shuftan: What kinds of missions do the ships go on?

Chakku451 Rieko: We provide courtesy patrols and escorts for sailing events and do patrols to check for prim litter and navigation hazards throughout SL.

Bixyl Shuftan: Prim litter? Is it mostly just a nusciance?

Chakku451 Rieko: I usually find boats washed up on the shore after the owner has crashed during a sim crossing. Seems like most of my boating excursions end with me standing on the seabed with an upset parrot on my shoulder.

Bixyl Shuftan: Heh, the idea of a pet bird is nice.

Chakku451 Rieko: Thank you. Sansara can be a handful at times. ... I acquired him from a pirate.

Bixyl Shuftan: Oh? How did that come about?

Chakku451 Rieko: My RL brother was an independent pirate, meaning he didn't belong to a group. He gave me Sansara when he left SL. ... Let's just say he has a sailor's vocabulary.

Sansara : Hey! I'm the bravest parrot on the Grid.

Bixyl Shuftan: (chuckles) I take it there are also some RP (roleplaying) missions?

Chakku451 Rieko: We don't RP so much as offer assistance. We do the occasional demonstration, but for the most part we try to help out any boaters having issues.

Bixyl Shuftan: Have there been any incidents that stand out from others?

Chakku451 Rieko: Well...my very first patrol was for a series of boat races called the J-Classic, named after the boat that was used. During my patrol, I was approached by a pair of nude women in a sailboat who were looking for pirates. I didn't ask them, but I got the impression they wanted to be taken prisoner

Bixyl Shuftan: Women who wanted to be taken by pirates?

Chakku451 Rieko: They were really nice about avoiding the race route. Yes, I believe that's what they were looking for.

Bixyl Shuftan: Did you do anything about them?

Chakku451 Rieko: There wasn't really anything I could do. It was a mature sim and they weren't really causing any trouble. I gave them a copy of the race route and asked them to try to avoid getting in the middle of a race, which they readily agreed to do. ... Oh, my rank is Command Master Chief.

Bixyl Shuftan: How long does it usually take someone in the SL Coast Guard to rise in the ranks? 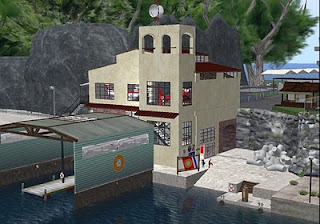 Chakku451 Rieko: It depends. I was offered an officer rating when I requested to be assigned to Muirhead Station, but expressed a preference to remain in the enlisted ranks.

Chakku gave me an LM of Muirhead, as well as a notecard with a little information, and we bid each other farewell, and went our separate ways. I later went to the station, and found it to be well detailed, both the equipment and vessels.

The SL Coast Guard also has a website at: http://www.slcoastguard.org/ Both the website and the notecards Chakuu provided stated the organization made a strong emphasis of boat safety.