Just before the sims for the 2009 Relay for Life Walk were taken down, the teams held a “teardown party.” I never found out if it was planned, or came about spontaneously, but it was quite a sight, with everyone whooping it up, builders, team captains and officers, and bystanders such as a certain reporter. 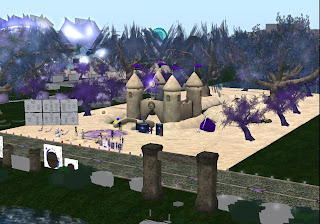 I expected something similar this year. But it didn’t quite happen like last year. After the Walk was over, many of the officers in the Passionate Redheads group either dropped out of sight or were on little. As it turned out, the Redheads had to deal with a number of problems this year, many of the people getting sick, having to help family, or otherwise had to deal with real-life problems. Combined with the “Great Recession” as the current economy is sometimes labeled as having, the Redheads endured what one called “a perfect storm” of trouble that could easily stall a fundraiser in its tracks. And still, the team managed to raise thousands in US dollars.

Maybe the other big teams were having similar trouble. I didn’t hear of one big last party, though did notice a number of small gatherings on the map on Tuesday July 20th, the last day before the builds were to be torn down. Deciding to drop in on one, I found a gathering of people at a beach scene, with plastic pails and kiddie shovels, sand mounds one could bury themselves in to their necks, with a huge sand castle in the middle. It turned out that the DJ here was also broadcasting into the radio stream over the RFL track area. Redhead builder Shockwave Yarearch also dropped by, joining in the dancing for a while. 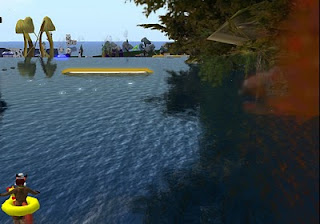 As the party went on, the DJ gave an announcement. One of the track sim managers had raised the water level by ten meters, flooding the place. A little later, he described people going over to party over there, and more and more of the people at the beach party headed over. I was among them, teleporting over to the sim, and indeed it was all wet, trees with water up to their leaves and buildings with water halfway up the walls. Unlike a real-life flood, no damage done here, though.

Someone began passing around ducky inner tubes. They really couldn’t keep you afloat without a swimmer AO, but fortunately I remembered I had one. More began appearing, a few others probably using some kind of AO to help them float. Others deployed umbrellas and floated around like Mary Poppins. Then a boat showed up, captained by someone looking like a pirate, and someone else in a tiny duck avatar on board. It was certainly weather for ducks at one point when rain began coming down. Rain is pretty rare in Second Life, and for some it was the first they had seen it. 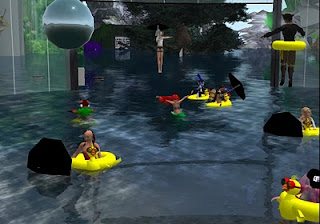 People were having a great time, laughing and joking, and then came the fish puns, “Oh my cod!” “I did it for the halibut.” “I’m calling the carps.” People even talked about doing a water sim next Relay, selling mermaid/merman avatars and swimmer AOs for charity.

More recently, I did hear of a party the Redheads will be having to celebrate their success at the Relay, on Saturday August 14th at 10 AM. Enough time for those most involved to take a well-deserved rest.

But it’s that spur of the moment party at the flooded sim that to me represents the final bash of the 2010 Relay for Life track.