Update on Tuna Oddfellow of the Odd Ball 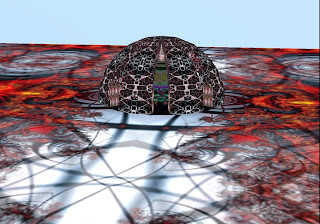 Tuna Oddfellow, known as “Fish the Magish” in real life, runs the Odd Ball with the help of his partner Shava Suntzu. The Odd Ball show is a one of a kind place in Second Life in which the area are surrounded by dazzling colors and patterns described by some as like a psychedelic experience without the drugs, described by others as dancing in a kaleidoscope.

When I interviewed Tuna and Shava in May 2010, their situation was a troubled one. Shava did most of the speaking, describing Tuna as disabled due to medical problems and the pain that came with them.

Tuna Oddfellow: ... I'm not in pain for most of my day, which is better than it was. But I don't go through a day generally without hours of it in really bad pain.

Shava Suntzu: And he can't predict when. It makes it impossible to plan things. Sometimes he can muscle through it. He was in pain for most of every day until we started the new medication in January. But it seems to be plateau-ing. It doesn't cure anything, it just reduces the symptoms. ... There's nothing that fixes this -- it's a nervous system disorder that's recognized, but they don't know why it happens. And you can't use most pain meds for it because all the opiates mess with the function of the gut, and the disorder is already messing with nerves in the gut. So they just chock it up as "neuropathic pain,” which even his GI specialist admits is a "garbage pail diagnosis.”

Despite their troubles, the pair did their best to be optimistic, talking about the development of the Odd Ball, how in it’s first showing the audience found themselves in a “mild euphoric” state. When a psychologist looked at it, “he thought it was inducing theta activity in the brain” and were later told it seemed “that there was alpha too. That's typical of some kinds of deep meditation. So this was pretty exciting. We kept working to refine what we did ... everyone kept saying it felt like being stoned.” 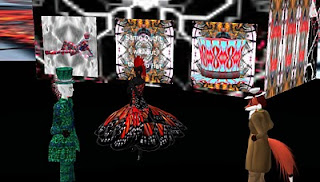 Shava worked to find out exactly how the special effects worked, and in July 2009 had pretty much done so. “And now we're filing patents. We're so close to getting to the point where things could get better.” But Tuna’s declining health and then her catching pneumonia were pushing them to the financial edge, “I missed some deadlines and some consulting stuff, and lost some work, and now we're just hosed. ... I thought I'd find more work, but I haven't yet. What we do in SL, generally pays the rent and expenses here. But we aren't like the people who pull out money every month.”

I met up with them again earlier this month. Shava told me they had been to another doctor who made some progress in finding out what was wrong, and expected to hear more news in about a week. Checking later on, Tuna had been given some new medication that was working better, Shava saying, “Tuna's adjusting to his meds, so he's actually been able to work on Odd Ball stuff, but he's not very mobile. I’ll take it though. (smile) His schedule is set by when the pain's least. ... It's *really* good for both of us when he can be engaged.”

The Social Security office was reviewing his case about his benefits, but there was some bad news, “My landlord is giving us an eviction notice next week. In Massachusetts, that gives us 6 months to figure things out. But it stings. I've been all kinds of activist and entrepreneur -- intellectually, I know I always get through these things, but that fails to make them fun to go through. It does inoculate somewhat against despair though.”

“On one level, I can't complain. I've had a very adventurous life, and I would probably be bored stiff doing the conventional run of things. ... I figure Second Life drama is usually so tawdry, we get to raise the bar by doing the classic starving artist romance? It's like La Boheme, except Tuna has a beard.” She was doing his best to keep a cheerful face, “It's a survival tactic. If you don't, you stop moving, and that's when it catches up and eats you! “

Tuna and Shava have incorporated their business in real-life, Oddfellow Studios, and have a website at http://oddfellowstudios.com .