Return to “The 1st Question”

It’s been a little over a year since my appearance on “The 1st Question,” hosted by Pooky Amsterdam. She had invited me onto the show the first time after a chance meeting, and meeting up again at the SL7B celebration asked me if I wanted to make another appearance, on Tuesday June 29. Needless to say, I accepted. 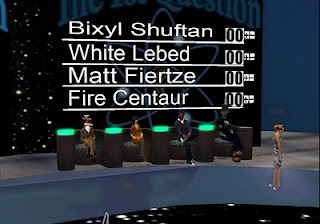 For those not familiar with the game show, “The fast-paced, fact-based, fun hour of science related merrymaking, audience participation, prizes, wit & wisdom,” it’s broadcasted live on Treet.tv every Tuesday night at 7 PM SL time. Consisting of a combination of science trivia questions and other mindbenders, it’s been called “A cross between lunch with Albert Einstein and the classic 50’s game show.” Four contestants try to outdo one another in front of a live audience numbering a few dozen, while the show is broadcasted live to compatible viewer TV sets within Second Life and the live broadcast page on the Treet.tv website. Old shows can be seen by checking the archives.

Contestants have to show up by 5:30 PM SL time at the show location in order to prepare for the show, to make sure there won’t be any technical clitches such as echoes and feedback. Besides myself, the contestants were White Lebed, an “Artist-in-Residence” at The University of Western Australia (UWA) and one of the volunteer staff for SL7B as well as being involved with Burning Life, Matt Fiertze, the “founder of First Link & vBusiness Link,” and Fire Centaur, the director of B3D Multitech Limited, and whom liked to focus on education in SL.

The show started up at 7 PM, with a little funnery display from a surfing tiny, then Pooky and her cohost Hydra Shaftoe introduced themselves, then us. Hydra has been involved in some real-life news lately as he volunteered some time to help clean up some oil-soaked birds in the recent Gulf oil spill. We first engaged in a little science funnery as we were asked which element we thought represented us. My answer: iron. It was what type was made out of, and when it rusted, it was the color of my avie. Matt went with carbon, “keep it simple.”

In “Nuggets of Knowledge,” we were asked to each ask Hydra a trivia question that we knew the answer to. Mine was, “can one of the space shuttle’s insulating tiles be held in someone’s bare hands when red hot?” In “Word Up,” we were asked to make up a word with a definition, with the audience to vote on whom was best. I thought I did good with “bubblic - addicted to popping bubble wrap packing material.” But Matt wowed them with his “Prim-Fu" - the art of building with as low a prim count as possible to combat lag and other glitches. The audience voted his “not a word but should be” as best. 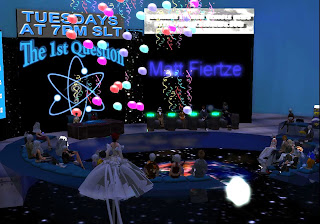 We went on with “Yea Me or Nay Me” and other sections with trivia questions. I did better this second time than the first, feeling not so tense. I was tied for first for a while, then Matt took the lead and kept it. The audience helped me stay un the running with a couple questions. But at the show’s end, Matt Fiertze was the winner with 12 points. I was second with a respectable 8. White and Fire had some bad luck and were further behind.

For winning, Matt had a chance to visit Pooky’s prize vault. But Pooky congratulated all of us for doing a good job under the pressure of the camera. Three of my friends, including Grey Lupindo, also showed up for the show, with a number presumably watching live from the Treet website.

As it turned out, this will be the last live showing of “The 1st Question” until August. Until then, people can always go to the archives. The episode I appeared on Tuesday can now be seen in them: Here.

And yes, I know my voice is weird.

“You have a question, we have the answer.”