Following The Walk for Relay for Life, for a few days until the teardown people continued to have fun at the various sims around the track. People explored around, collected freebie souvenirs, or just got together for a party. The various Relay groups would hold one, and anyone else was free to drop in. 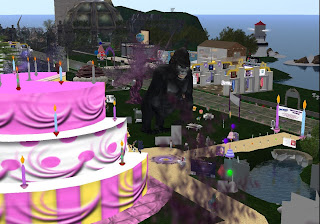 On Monday July 19th, the Relay Rockers group were holding a bash at their camp, which looked like it was set up for a celebration, with it’s picnic tables, balloons, stuffed animals, cupcakes and cakes. Standing above it all, one giant multilayer cake, with pink icing, candles, and a slice cut out. People were partying across the camp, including a few on the giant cake.

I dropped in along with a few others from the Passionate Redheads. Among them. one of the two main builders of the Redhead camp, Lomgren Smalls. Lomgren is unique among Second Life residents as the “tiny kitty” avatar he uses almost all the time is just six inches in height. A skilled builder, a few years ago he tried pushing the limits of Second Life’s physics by seeing just how small he could make an avatar that could move more or less normally, being able to do most common actions except dance. It’s certainly been a conversation-breaker, and in a job fair in Second Life even helped him get his current real-life job. 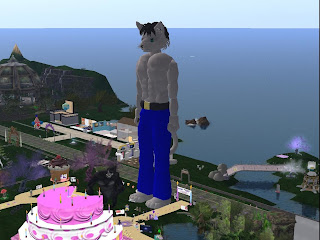 We enjoyed the party, dancing to the music when we heard, “Big ape.” And looking up, what came into view was a big mass of muscle and hair: a macro gorilla avatar, probably King Kong size. It danced alongside the rest of us for a little while, then I saw one girl appear in it’s huge hand, as if doing one of Fae Wray's scenes, “EEEEEEEEE!! It’s got me!! Help! Heeeellllppppp!!”

Someone decided to help in his own way. “I’m going to put that gorilla in his place,” Lomgren commented, then zipped away. A minute later, something appeared, towering over the gorilla. It was Lomgren, but in a much, much, larger avatar: a mega-macro. He had also decided to try to take avatar building in the other direction, building a huge feline that put most macros to shame. I didn’t get a measure of just how tall it is, but it was probably over 100m in height. 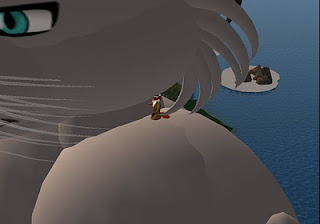 Lomgren stuck around for some minutes. One guy teleporting in found himself between the huge avatar’s toes. The girl held by the ape soon dropped from it’s hand, and soon the gorilla was gone from the party, not wanting to look like an organ-grinder monkey next to the mega-macro. After the hairy primate was gone, Lomgren disappeared again, then came back as his usual six-inch high self, “I prefer being this height.”

The master builder had his chance to stand tall literally as well as figuratively.